“Mr. Flood’s Party,” one poem in Edgar Lee Masters’ “Spoon River Anthology” (1915), touches your heart with a brief, sad scene cheered a little by the liquor in a jug. An elderly man trudges back from a town to his lonely sleeping place, carrying a jug of low-grade alcohol. He stops in the brightness of the moon, imagines a drinking companion who is himself, and in a mock party draws on the jug a few times before plodding on. The quaffs lighten the gloom for the solitary man, if only for a few minutes, even drawing from him a burst of song, but then the darkness, the seclusion, the losses of former friends, and the emptiness of his remaining life consumes the brief happiness created by the drinks. Each of the seven stanzas refers to alcohol, implicitly in the first and third, but explicitly in the other five stanzas. The poet shares with us several views of alcohol.

Old Eben Flood, climbing alone one night
Over the hill between the town below
And the forsaken upland hermitage
That held as much as he should ever know
On earth again of home, paused warily.
The road was his with not a native near;
And Eben, having leisure, said aloud,
For no man else in Tilbury Town to hear:

“Well, Mr. Flood, we have the harvest moon
Again, and we may not have many more;
The bird is on the wing, the poet says,
And you and I have said it here before.
Drink to the bird.” He raised up to the light
The jug that he had gone so far to fill,
And answered huskily: “Well, Mr. Flood,
Since you propose it, I believe I will.”

Alone, as if enduring to the end
A valiant armor of scarred hopes outworn,
He stood there in the middle of the road
Like Roland’s ghost winding a silent horn.
Below him, in the town among the trees,
Where friends of other days had honored him,
A phantom salutation of the dead
Rang thinly till old Eben’s eyes were dim.

Then, as a mother lays her sleeping child
Down tenderly, fearing it may awake,
He set the jug down slowly at his feet
With trembling care, knowing that most things break;
And only when assured that on firm earth
It stood, as the uncertain lives of men
Assuredly did not, he paced away,
And with his hand extended paused again:

“Well, Mr. Flood, we have not met like this
In a long time; and many a change has come
To both of us, I fear, since last it was
We had a drop together. Welcome home!"
Convivially returning with himself,
Again he raised the jug up to the light;
And with an acquiescent quaver said:
“Well, Mr. Flood, if you insist, I might.

“Only a very little, Mr. Flood—
For auld lang syne. No more, sir; that will do.”
So, for the time, apparently it did,
And Eben evidently thought so too;
For soon amid the silver loneliness
Of night he lifted up his voice and sang,
Secure, with only two moons listening,
Until the whole harmonious landscape rang—

“For auld lang syne.” The weary throat gave out,
The last word wavered; and the song being done,
He raised again the jug regretfully
And shook his head, and was again alone.
There was not much that was ahead of him,
And there was nothing in the town below—
Where strangers would have shut the many doors
That many friends had opened long ago. 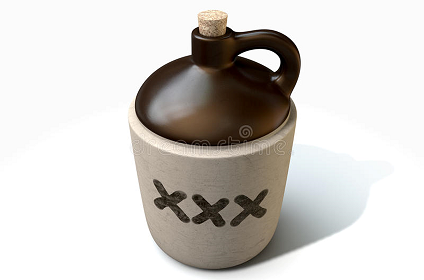 Social Disapproval. At the start (stanza 1, line 5), Eben Flood paused warily, self-conscious and a touch nervous about what he is about to do. He is sensitive to the possibility that a town resident might spot him indulging and disapprove of him. His small-town, late 19th century America included many advocates of temperance: they frowned at drinking alcoholic beverages, and one would suppose they frowned even more so at indulging in the Devil’s brew while alone. Flood didn’t want the approbation of his community, but he had trudged into town for the purchase and wanted a drink, so he made sure no one else was around. This caution hurts, given the emphasis in the poem on Flood’s loneliness: he made sure he was alone before he sought out the balm of the bottle.

Toasting. Carrying over into the second stanza, Flood conjures up a drinking buddy (himself, it seems) who urbanely urges him to drink to the bird, a reference to a line in the “Rubaiyat of Omar Khayyam” (life passes by, the bird is on the wing). Huskily, with deep feelings stirring, Eben accepts the imagined invitation to toast. His voice might have changed because Eben was changing characters, or more likely Masters’ carefully chosen word huskily suggests the sadness within Flood. Either way, the traditional form of a toast made by clinking glasses and drinking alcohol finds expression in this stanza.

The third stanza draws on metaphors of battle to represent Flood’s difficult life. It concludes in lines 5 through 8 with allusions to toasts that others have raised to him (Where friends of other days had honored him, A phantom salutation of the dead). As Proust’s famous madeleine evoked memories of times past, the taste from the jug revived Floods long-ago revelries, which faded in Floods mind’s eye. Alcohol plays a prominent role in social gatherings, and salutations of “cheers” standout in them.

Expensive. Extending the “party”, Flood and his alter ego pause in the following stanza (the fourth), cherish the jug and tenderly rest it and its remaining drink on the ground. Alcohol can be expensive and to break the bottle a waste and a shame. Flood has spent a significant amount for him to fill his jug and he takes pains to protect it.

In the fifth stanza, the imaginary friend proposes another toast and Convivially returning with himself, Flood tips the jug once again to his lips. He is enjoying his small occasion and the effects of the drink. He relishes even a made-up companion and even more the glow and altered state that the jug’s contents provides. One can be sure it was nothing as mild as beer, wine isn’t for jugs, so this was potent homebrew moonshine with a kick.

Respite and Relief. Whatever he filled his jug with in the town below, it gladdens him. Alcohol blankets him that chill night with several minutes of relief, of pushing away the grinding of age and poverty, and even bubbles up some flights of song Until the whole harmonious landscape rang. The no more, sir; that will do. reminds the reader that often when alcohol is being served someone shows signs of over-indulging and losing the composure that is expected of them. Others caution the drinker to pause or stop, such as in a cafe early in the morning.

The emotion the final stanza invokes – weary, last word, song done – the passing away just ahead of Eben Flood darkens the poem. Flood has reached the end of a long life, the dark at the end of his tunnel, and has scant pleasure to give him solace. The pretense of intimate swallows alone at night with a friend he wishes he had pose for much that remains Eben as warmth, camaraderie and pleasure. He creates a small measure of relief from a rock-hard life in the taste and effect and shared companionship of toasts and drinks. The choice, to days gone by and old friends now lost, foreshadows the hurt of loss of friends that ends the poem. Alcohol helps sufferers forget for a while, but the buzz dissipates and life storms back in.

He raised again the jug regretfully
And shook his head, and was again alone.

In this foray into the sociology, physiology, and psychology of drinking alcohol, the poem delves into the guilty pleasure that elicits concerns about being criticized by non-drinkers, the bonhomie of raising a glass to and with others, the disinhibition of song that often mixes with drink, and the pleasure while the glow lasts. Toward the end of his lonely life, Eben Flood finds solace and escape in the jug, but reality takes over at the end.

To consider subthemes of Alcohol that do not associate closely with this poem or the other three genre of art, read additional subthemes. Read this for more about Themes from Art.