Alcohol, from "Margaritaville", a song by Jimmy Buffet

A beach bum, awash in margaritas, boozily staggers through this ballad of rueful retrospection. He concludes that he is to blame for his plight, not some unnamed woman. But the connotations we concentrate on in Jimmy Buffet’s “Margaritaville” emanate from alcohol. The blended deliciousness of margaritas cozens him yet robs him of clear thinking and sucks mature control from his life. The alcohol, we will see, gives him refuge but removes his agency.

Nibblin' on sponge cake
Watchin' the sun bake
All of those tourists covered with oil
Strummin' my six string
On my front porch swing
Smell those shrimp, they’re beginnin' to boil

Wastin' away again in Margaritaville
Searchin' for my lost shaker of salt
Some people claim that there’s a woman to blame
But I know, it’s nobody’s fault

Don’t know the reason
Stayed here all season
Nothing to show but this brand new tattoo
But it’s a real beauty
A Mexican cutie
How it got here, I haven’t a clue

Wastin' away again in Margaritaville
Searchin' for my lost shaker of salt
Some people claim that there’s a woman to blame
Now I think, hell, it could be my fault

I blew out my flip flop
Stepped on a pop top
Cut my heel, had to cruise on back home
But there’s booze in the blender
And soon it will render
That frozen concoction that helps me hang on

Wastin' away again in Margaritaville
Searchin' for my lost shaker of salt
Some people claim that there’s a woman to blame
But I know, it’s my own damn fault

Yes, and some people claim
That there’s a woman to blame
And I know, it’s my own damn fault 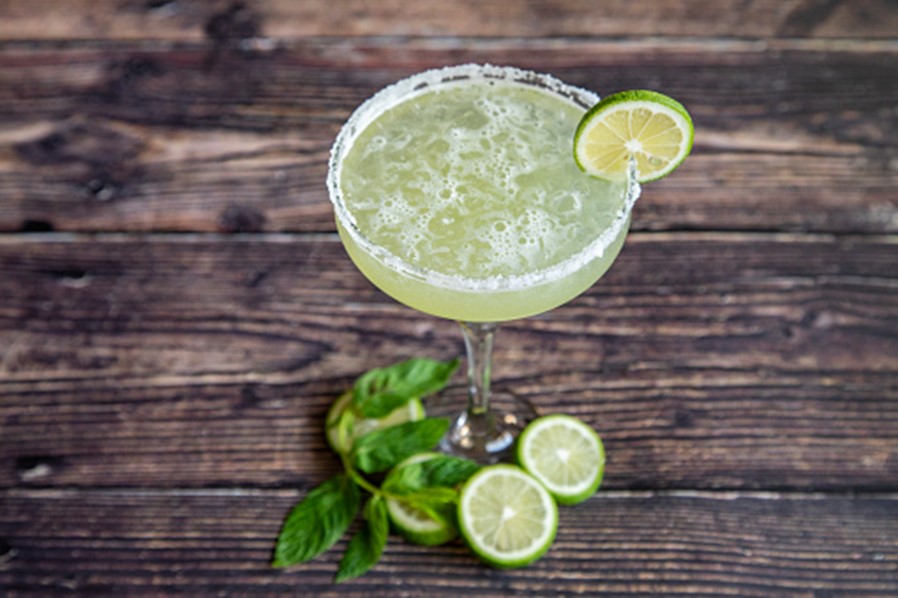 Robs Purpose: The start of the song sets the scene: vacation-like, purposeless relaxation. The first line of the first stanza of Jimmy Buffet’s “Margaritaville” hints that the undirected singer eats poorly, nibblin’ on sponge cake, and that a total lack of schedule or commitments surrounds his day-to-day boredom and aimlessness. Watching lazily and without purpose at tourists getting sunburned leads nowhere. But why is this soul so lost?

First heard in stanza two, the refrain clarifies his slough of purposelessness: the singer is treading margaritas, so to speak: his life is frozen as he finds surcease from sorrow through swilling margaritas.

These refrain lines repeat the name of the drink that has subdued the depressed singer. We should unpack it.

Wastin’ away conjures up the physical toll of consuming too much alcohol for too long. Chronic drinkers tend to eat poorly – sponge cake! – and over time may lose weight and strength – they literally waste away. But the phrase and blank-eyed gazing also suggests the loss of direction, the long stretches of doing nothing, the draining away of vitality – what a waste!

As for the missing salt shaker, many people drink margaritas with salt on the rim of the glass, but they don’t add the salt by using a shaker (they dip the glass upside down into salt). That might be the meaning of the fruitless search or it could be the aimless perseveration of someone continuously three sheets to the wind. Most profoundly, he is searching for the cause of his despair and the metaphor of the salt shaker conveys that goal.

We are given to understand that depression from a collapsed marriage or love affair triggered the slide into vagrant tippling.

Back to the lyrics and stanza three. We’re at a Mexican beach resort the singer has sardonically dubbed Margaritaville. Geography and proper names have drizzled away; all that matters to him is the fruity mix laced with tequila that blanks out his hurt. The singer lacks a compass in his life.

Weakens Decision-Making: He can’t manage to pull himself together and figure out how to recover from the emotional blow. Without a plan, he stayed near the beach, not deliberately but from an inability to cope and step away from his sodden plight, and resorted to drinking. In the second portion of the stanza, we glimpse how far he is gone. With too many margaritas, he makes poor decisions (don’t know the reason) or impulsive choices.

Too drunk to know he got a tattoo that looks like a local young lady, he can’t recall anything:

How it got here, I haven’t a clue.

Blotto, out of it, he impulsively paid for a tattoo that afterwards he can’t account for. Amnesia follows from the worst benders. So, I haven’t a clue.

The seduction of warmth, low costs, and the siren-like beckoning of potent fruity drinks have robbed the singer of his ability to make longer-term decisions. Or perhaps the singer had already lost his bearings, so it was easy to submerge in tropical indolence and abandonment in the cups.

Physical Risks: After another refrain, which subtly shows him narrowing in on the truth, the fifth stanza reminds us that if you over-consume alcohol you run a greater risk of getting hurt. Your balance, reactions and judgment are out of kilter. He doesn’t take care of his meager possessions (I blew out my flip flop) so when he stepped on a sharp bottle top (probably from a can, a pop top) he cut his foot badly enough to make him turn back to where he stays. Note the unurgent cruised back home to the comforting nurse of his favorite beverage (a bit like the jug for Eben Flood).

Temporary Respite: One of the many terms for a drunken spree is a “bender”, which Jimmy Buffet teases out of the listener with the rhymes of blender and render. Alcohol buoys up people for a period of feeling better, cushioning the pain of life that that they would rather flee. Also, to be fair, many people enjoy the taste of their favorite liquor. Our beach bum likes margaritas on their way down, to say nothing of their balming effect.

Sadly, many people who can’t cope with the vicissitudes of life pour their way to temporary oblivion: alcoholic flight from the actual. It helps me hang on, but like drugs the effect of the margarita inevitably wears off, inevitably for the world and its hurtful cuts of pop tops to crash the party. Put another way, absinthe buys a bit of time.

In the final stanza, the seventh, he penetrates the fog of margaritas and comes to the truth: it’s my own damn fault. Did he lose his wife or girlfriend from drinking too much? Personal accountability for drinking is part of the realization. He realizes that his inability to stop drinking demonstrates yet another self-inflicted mistake.

Why he has sunk to this forlorn state we never learn, but the constant theme is drinking alcohol. He drinks to forget, to cope with being overwhelmed emotionally, or because he is an alcoholic and doesn’t want withdrawal pains. Alcoholics are addicted to their drug.

This slice-of-life song brings up positives of alcohol. It tastes good and it brings a pleasant buzz to people as it dulls the sharp edges of life. But the song also vividly conveys or hints at the deleterious effects of too much alcohol: poor health, increased risks, sloppy decisions, diminished self-control, and physical addiction.

If you are interested in subthemes of alcohol that are not closely associated with this song or the other three genre of art, please visit Additional Subthemes. Read this for more about Themes from Art.

We invite you to read about other rock songs discussed on this blog, and their themes. Here are some of them: