Decisions, from "Do You Believe In Magic", a song by the Lovin' Spoonful

The 1960’s song “Do You Believe in Magic” sounds at first hearing like a light-hearted jibe at fickle teenage boys with a roving eye. Now falling for this cute girl, next moment a glimpse of another girls captures his heart completely. But underneath the flighty affections, the pop hit helps us consider aspects of decisions.

“Do You Believe in Magic” (Lovin’ Spoonful)

Sometimes there’s one with deep blue eyes, cute as a bunny
With hair down to here, and plenty of money
And just when you think she’s that one in the world
Your heart gets stolen by some mousy little girl
And then you know you better make up your mind
Pick up on one and leave the other one behind
It’s not often easy, and not often kind
Did you ever have to make up your mind?

Sometimes you really dig a girl the moment you kiss her
And then you get distracted by her older sister
When in walks her father and takes you in line
And says “Better go home, son, and make up your mind”
Then you bet you’d better finally decide!
And say yes to one and let the other one ride
There’s so many changes, and tears you must hide
Did you ever have to finally decide? 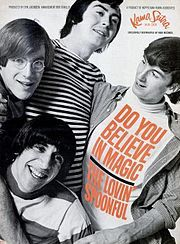 Difficult, and Uncertain Timing: It’s not often easy reminds us of the knots we tie ourselves in when we have to make a complicated call. The hardest situations confront us with momentous decisions that pit our valued beliefs against each other. Moreover, we encounter possibilities that require decisions at different times. If he asks you to marry and you say “No,” when will the next proposal come? If not this cute bunny, how long will it be before the mousy love-of-your-life appears? As we face a big decision, we rarely know when or if we’ll get a second chance.

Inexplicable: How humans arrive at decisions remains mysterious. Daniel Kahneman’s “Thinking, Fast and Slow” explores some of the cognitive traps and influences that clog what many people wish were Spockian calculations. As Pascal wrote, “The heart has its reasons, which reason does not know…”. As in “Do You Believe in Magic,” how can anyone completely articulate why Your heart gets stolen. It’s magic. Love at first sight is blind to reasoned decision-making. Our heart, hormones, or genetics compel us more often than we might care to admit. Neurons fire, something clicks, but we can’t explain the workings behind making up our mind to choose one path over another.

Regret: Regret, such as “buyer’s remorse,” can trail along after the decisive deed is done.

There’s so many changes, and tears you must hide
Did you ever have to finally decide?

[T]ears you must hide points to the rueful retrospection that can dog a person after they stop bidding on the antique car they love, suffer through another sauna-like summer without air-conditioning, or marry a man who is never promoted to full Professor. You wish you could erase the sorrowful memory of what you did at the concentration camp. Alternatively, the tears might be those of another person who’s suffering you caused and who’s grief you would rather not think about. When winners and losers clarify after a decision has settled, winners suffer pangs of guilt and losers sob.

Power and Pain: Decisions may hurt others – they are not often kind – because inevitably power shifts or is exercised when someone makes up their mind. If you elect not to renew your lease, your current landlord loses power; if you pick soccer over tennis, the tennis coach and team loses out; if you go to the prom with one person, you don’t go with the other who might have yearned to.

Hurt feelings or emotional loss don’t necessarily line up with loss of power, but they overlap. The decisions in the song suggest that the cute-as-a-bunny honey will be disappointed, or the spurned younger sister will be angry. As with a traveler who turns right, the left path has been rejected.

Life Changing But Slowly Develop: Unlike the frivolousness of deciding to play cards and how to win, decisions about dating and marriage might very well shape a person’s life. Such momentous decisions confront us very occasionally, or at least those decisions that we recognize at the time have the power to alter the arc of our lives. To change religions, to undergo a transgender procedure, to adopt a child or divorce a spouse – rupturing decisions at this level build over time and subject the person to periods of difficult introspection and weighing of alternative courses of action or timing. Completely unlike the urgency of a concentration camp confrontation, this song addresses decisions that can unfold over time.

The most difficult decisions revolve around emotions and intuitions that we often can’t articulate. That makes them hard, as our heart duels with our head. Meanwhile, as this modest song intimates, other people lose out when we eventually make up our minds.

If you are interested in subthemes of decisions that are not closely associated with this rock song or the other three genre of art, please visit Additional Subthemes. Read this for more about Themes from Art.