Decisions, from "The Road Not Taken," a poem by Robert Frost

Robert Frost’s “The Road Not Taken” highlights in a short poem a decision that is both earthy and metaphorical. Two paths beckon, neither one having more attraction than the other, but the traveler must finally make a decision. He appeases his heart that he can take the other path on a later day, but his head tells him that life will not bring him back that way again. Life’s small decisions shape us.

“The Road Not Taken” (Robert Frost)

Two roads diverged in a yellow wood,
And sorry I could not travel both
And be one traveler, long I stood
And looked down one as far as I could
To where it bent in the undergrowth;

Then took the other, as just as fair,
And having perhaps the better claim,
Because it was grassy and wanted wear;
Though as for that the passing there
Had worn them really about the same,

And both that morning equally lay
In leaves no step had trodden black.
Oh, I kept the first for another day!
Yet knowing how way leads on to way,
I doubted if I should ever come back.

I shall be telling this with a sigh
Somewhere ages and ages hence:
Two roads diverged in a wood, and I—
I took the one less traveled by,
And that has made all the difference.

Coin Flips: Long I stood. When pros and cons feel balanced and the traveler is on the fence, so to speak, we can flip a coin or let a random event rule: “Whichever path has the next bird call will be the one I head off on.” When it’s a toss-up, yet we have to do one or the other, if we don’t care about seemingly comparable choices, we can cast lots. This walker in the woods couldn’t decide which way to go, but a perception of the comparative yellowness of grass tipped the delicate balance.

The inconsequentiality of the matter may lead us to concluding that either is equally favorable or unfavorable. Fortunately, many decisions, such as whether to play a card or draw a card are not big deals. 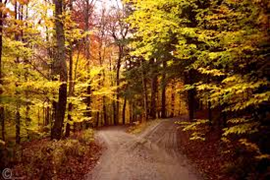 Cognitive Dissonance: The traveler finally chose the grassier path, or so goes the rationale for the decision, but in the next lines (lines 9-10) admits that both paths seemed equally untrodden, equally worthy. Sensing that the justification has been manufactured to defend the choice, which was basically a coin flip, the traveler seizes on a cheering thought. Oh, I kept the first for another day! Not wanting to harbor doubts about his belief, the traveler grabbed at an explanation that sufficed. After the fact, we can all construct defenses and formulate reasons for our actions.

Compounding and Curtailing: Way leads on way. Each decision we take makes a set of later decisions less likely, since we foreclose or limit options, while it increases the likelihood of another set of branching options. To surrender a child to guards almost inevitably foresakes the child. If, by contrast, a girl decides in middle school to focus on playing ice hockey, that commitment may make it less likely in high school for her to excel as a ballerina. And her probability of becoming a yoga instructor or a Ginger Rogers student will likely decrease. Unless the paths in the woods converge at some later point, the traveler has ended the possibilities along the rejected path and opened unknown encounters on the selected path.

Counterfactuals: I should be telling this with a sigh. Decisions usually mean you can’t go back and re-create the same situation and try the alternative course of action. You can imagine what might have happened had you decided against buying the stock of “some fruit company” (“Forrest Gump”) or hadn’t stopped in that small diner and started chatting to your future life partner, but the counterfactual won’t happen. Young men who choose the blonde may lose the brunette. We can all fault decisions in retrospect, as we know the perceptiveness of hindsight, but we can’t step back in time and make the better decision. This traveler, too, can’t ever learn what might have happened down the other road.

Retrospective Logic: And that has made all the difference. In situations where we give thought to our next step, we hit upon justificatory reasons. Most of us look back on decisions we made that turned out well and take credit for them as evidence of a considered, broader pattern we were aware of or pursuing. “From when I was little, I knew that I would become a large animal veterinarian.” Humans don’t like feeling out of control of their direction or buffeted by chance events; they like to think that their path through life was purposeful and not haphazard, that it was something other than the unraveling of pure happenstance at critical junctures (“The ABC course was over-enrolled, so I took XYZ course in the same time slot, which turns out to have set me on my career path.”). As we look back, we comfort ourselves and construct a tale that our life had a teleology that resulted from our deliberate and successful decisions.

On the other hand, when we regret decisions we took, we find it easier to blame external forces. “How could I have known the house was riddled with asbestos?”; “He didn’t tell me that the gun was loaded.” If a bear mauled the traveler on the road taken just beyond where it bent in the undergrowth, we would feel the tragedy of the decision. Few readers would anticipate that; the poem gives the impression that it was the right path to take and the decision led to good things – and that has made all the difference – but Frost leaves the traveler’s fate ambiguous.

Frost’s poem of the seemingly innocuous option by the traveler reveals deeper aspects of decisions. People sometimes can’t see their way clear so they do “eeny, meeny, miney, moe” and then conjure up something defensible to say about a justification other than a tie breaker picked the one. Whether deeply pondered or quickly decided, decisions foreclose what might have happened and can make all the difference.

If you are interested in subthemes of Decisions that are not closely associated with this poem or the other three genre of art, please visit Additional Subthemes. Read this for more about Themes from Art.