Decisions, from "The Card Players", a painting by Paul Cézanne

In Paul Cézanne’s “The Card Players” (“Les joueurs de cartes”), we peek in on two men engrossed in a game of cards. Although Cézanne probably painted this calm and pleasurable glimpse of French life without a thought to its implications for decision-making, we can interpret from it several. 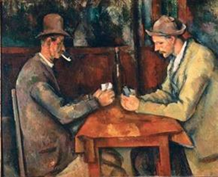 Ubiquity: In the ordinariness of this scene, we can appreciate the culmination of an extraordinary number of barely-noticeable decisions by both men. The clothes they wear, the time they meet, the game they play, the stakes they play for, the location of the café table, the drinks they had, and on and on. Such mundane decisions bear no consequences; most floated in the stream of their lives: most are as familiar, habitual, and predictable as shaving. All of us are immersed in quotidian decisions, most of them demanding no cycle times in our brain. Whether they put their wallet in their back pocket that morning was hardly the result of deliberate cogitation.

Constrained or Wide Open: While this painting glosses over a multitude of options picked, the card game they’re playing presents a different aspect of decisions. The rules of the game constrain what the players can do so their range of possibilities face clear and understood limits. Many of the decisions stand clear and distinct: this card is played, that card is discarded. What happens because of a choice they make will be known momentarily and can be assessed immediately. The wide-openness of timing, appearance, and so forth that led these two men to deal out a hand contrasts with the circumscribed realm for action of the game.

To this we can add the dimension of the game in its tactics and strategy. Perhaps bluffing is possible or wildcards can be chosen or omitted. How they play against each other over time introduces strategies, whereas individual choices of cards to keep or discard could represent tactical decisions. The play of the hand mixes short-term and longer-term considerations, which is a hallmark of most decisions.

Solo or Multiple Deciders: Note also that the decisions embodied in this modest scene interact only with each other. Most of our daily rituals and personal choices affect only ourselves, but here the two had to agree to meet, pick a rendezvous, and decide on the boundaries of their activity (how long to play, who keeps score, etc.). Thus, the painting combines what we might call “unitary decisions” that change something for one person but impinges on no one else, and “multiple decisions” that react to or prompt someone else’s decisions. Mob psychology illustrates a form of collective decision-making.

Pattern Identification: The more players learn about a game, the faster they recognize patterns and can react: if he plays a Jack, he probably has the 10; if he draws twice in a row, he is maneuvering to lay down his hand, I should keep my Ace. The more patterns experience has stored in our mind, and the more quickly and accurately we can match them to the new situation that faces us, the more adeptly we can make decisions. Often, what looks like intuition or expertise boils down to the person having seen something many times before and thus being able to react quickly.

Meaningfulness: If one were to describe a meaningfulness spectrum of the decisions made by these two ordinary men, such as the importance of a road not taken, one might start at one pole with their most minor, facile and easily forgotten decisions: to roll over in bed, to pull up the sock of the left foot first.

Moving toward somewhat more consequential reality, laying out what to wear has consequences of comfort, cost, and communication to perceptive onlookers. The bowler topping the man on the left might suggest to onlookers, for example, affluence, stylishness, age, dowdiness, or an ideology.

Then there are the decisions about playing the game rather than working to make money or helping other people or praying in church. Playing a game marks a casual pastime; working represents an ongoing decision of much more import.

More significant in their lives are decisions that either strengthen or wear away at their bodies. Who knows from this painting what health decisions either one of them has made that they might regret, such as not attending to an infected cut or deferring the filling of a decayed tooth? Perhaps they bicycled to this café and took the risks of writing bumpy streets of cobblestone without helmets.

The cigarette dangling from the mouth of the man on the left, perhaps not even lit, looks hand rolled and filterless. Regardless, the effect on his health was probably unknown to him, and deliberate thought did not slow his barely conscious lighting up and puffing. Over the years, however, it could extinguish his life. A habit, an ill-considered but entrenched pattern of decisions, smoking is Russian roulette.

All decisions sow seeds: some sprout tiny growths but others towering trees; some sprout romance and flowers while others grow poisonous thorns. Two pals, whiling away the hours with a friendly card game, represent even in such an unremarkable snapshot a number of important perspectives on decisions. They, and we, move through life in a constant flurry of decisions. Those decisions vary widely in their wide-openness, their degree of dependence on others, and their familiarity. Even more, they vary hugely on the short or long-term significance to the decider.

To consider subthemes of Decisions that are not closely associated with this painting or the other three genre of art, please visit Additional Subthemes. Read this for more about Themes from Art.