Destruction, from "Flood at Port-Marly," a painting by Alfred Sisley

Alfred Sisley’s painting captures the Seine River after it overflowed its banks and flooded the town of Port-Marly. The river’s waters cover the landscape behind Rue Paris, undoubtedly damaging the wine shop on the left and its wares. Despite the seeming tranquility of the scene, destruction rampages. The impressionist scene brings to mind other characteristics of destruction. 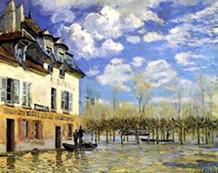 Mighty: Nothing that humans can trigger matches the nightmares natural disasters can unleash. Missiles, tanks, machine guns, and even hydrogen bomb explosions shrink when compared to the colossal energy and onslaught of weather. An iceberg can send to the bottom an unsinkable liner. Humans suffer mightily from hurricanes, tornadoes, typhoons, droughts, blizzards, hail, fires, tsunamis, avalanches and inundations, as shown in this scene of boating on a street, when rivers surmount their banks. We can build dikes and runoff areas, levies and dams, vegetation and storm sewers, but despite all our puny efforts the heavens can open and our land can drown. When the rains deluged this area of France, little could be done to lessen the widespread damage and loss. Sandbags put on a brave but temporary face against a rising wall of water that inexorably finds all cracks. Life on earth requires water, but too much water ends life.

Sudden: The worst calamities inflicted on us by mother nature surprise us. Before the relatively recent advances of science and predictions about imminent severe weather, unsuspecting people were clobbered by earthquakes, avalanches and volcanic eruptions. A lightning bolt, mudslide, or pyroclastic flow crashes down without warning. Ferocity is matched by velocity. At other times, the slow spread of vegetation can overtake a civilization, imperceptible expansions of ice can crack castles, or stealthy desertification can smother a once-proud capital or the monument that crowned it.

Widespread: How widespread was that tongue of inundation we cannot tell from Sisley’s painting. The two men had to move by boat, which suggests the region far and wide was smothered by the swollen water. The geographic scale of nature’s malignity varies widely. Lightning bolts boil a single oak. A tornado wipes out a narrow ribbon if it touches earth only briefly, or an avalanche may scour only a small portion of a slope. Other natural catastrophes afflict people much more broadly, or even everywhere. The volcanic explosion at Santorini in the 16th century BC launched a tidal wave that erased the Cretan civilization 60 miles away. Some estimates blame the bubonic plague for killing nearly one-third of the inhabitants of Europe. The asteroid that slammed into the Baja peninsula 65 million years ago came close to wiping out life on earth. And, the geographic carving of mighty glaciers can barely be imagined. The transformations of nature know no bounds.

Death and Sickness: If the Seine rose gradually, perhaps no one died from its waters, or at least not directly such as by drowning or heart attack. But flash floods and floods carry away helpless people. At the extreme, between 500,000 and 800,000 people perished in China’s 1938 Yellow River flood. Millions of people have died just in the past few centuries from the onslaughts in nature’s Pandora’s Box.

Beyond the immediate emergencies, after the skies clear, the flood waters may harbor dreadful diseases such as cholera and dysentery. Outdoor sanitation facilities share their viruses and bacteria with the flow of water, and whoever drinks that water may sicken and die. A snowstorm starved the Donner Party; dust storms leave miles and miles of crops and legions to go without food. Destruction unspools through sickness and starvation long after the potato blight takes hold.

Delayed Effects: This painting captures a moment, but for weeks or months of the aftermath the destruction will cause continued suffering. Farmers lose their crops, cattle drown or are swept away; supplies for weaving are ruined; an economy can be devastated by wrathful nature, just as it may be by jobs flowing offshore. Destruction means loss and loss means hurt.

From the grey color of the building at the bottom, which could have been the high-water mark from this event, it appears that the water has receded by the time we look on, but the Seine apparently rose enough for long enough to stain the wall. Even though the sky is blue and sunny, the town and surrounding area will be shaded by suffering for years. Black mold, weakened walls, collapsed cellars, or rotting wood extend the immediate destruction of the flood. After the earthquake that leveled San Francisco in 1906, fires raged for days.

While the upper portion of the masterful painting by Sisley exudes warmth and sunshine, the lower part starkly shows the widespread damage wrought by a flood. Like other blows from nature, a flood overpowers people; it rises inexorably and then suddenly the levee breaks; the loss of life and property that follows the worst catastrophes of nature – be they storms, vulcanism, or virus – can keep killing and collapsing for months and months.

To consider subthemes of Destruction that are not closely associated with this painting or the other three genre of art, please visit Additional Subthemes. Read this for more about Themes from Art.