Destruction, from "My Hometown," a rock ballad by Bruce Springsteen

The rock ballad “My Hometown”, composed and sung by Bruce Springsteen, captures the decline of a rustbelt American town. The stores on Main Street have closed, vacant windows gaze without blinking, and the steady blue-collar jobs at the textile mill have seeped overseas. The forces of racial strife and global trade have done in the community and those who can have fled. Over two or three decades the town has been battered and beaten. Destruction rears its head in this rock song in several aspects.

I was eight years old and running with a dime in my hand
Into the bus stop to pick up a paper for my old man
I’d sit on his lap in that big old Buick
And steer as we drove through town
He’d tousle my hair and say “Son, take a good look around
This is your hometown.”

In ‘65 tension was running high at my high school
There was a lot of fights ‘tween the black and white
There was nothing you could do
Two cars at a light on a Saturday night
In the back seat there was a gun
Words were passed, then a shotgun blast
Troubled times had come to my hometown

Now Main Street’s whitewashed windows and vacant stores
Seems like there ain’t nobody wants to come down here no more
They’re closing down the textile mill across the railroad tracks
Foreman says “These jobs are going, boys
And they ain’t coming back
To your hometown.”

Racial conflict fractured and hollowed out this hometown. The decade of the ‘60’s was riven by protests for racial equality, and the angered erupted on Main Streets across the country, or on a larger scale, as in Watts. Recall the musical “West Side Story” and the brawls between Puerto Ricans and New York City locals or the atrocities when India was partitioned in 1947 and hundreds of thousands of Hindus or Muslims died. Mistrust, segregation, exclusion, malignment, lynchings – all the ugliness of racial or religious prejudice destroys lives, property, and community.

The decade of the ‘60s was also marred by the civil and political discord caused by fierce opposition to the Vietnam War. Worse, our military’s deaths in Vietnam skewed black, so the racial injustice in America was exacerbated by the war’s injustice in Vietnam. Women, too, were struggling to be treated with dignity, equality and respect. Everywhere you looked, you could see the harms and destruction of these ugly tears in the social fabric.

To those with conservative views, the array of protests alarmed them and threatened the collapse of a long-standing way of life; for those who disagreed with the status quo, who marched and chanted “For the times they are a-changin’,” over-turning the confines and cruelties of the past could not happen too soon.

Economic Pressure: Whereas abnormal rains scoured the French village in Sisley’s painting and raging mobs or soldiers wrecked a colossal statue in Shelley’s poem, in this plaintive song we hear of the devastation wrought by the grinding forces of globalization.

Foreman says “These jobs are going, boys
And they ain’t coming back”

The higher cost of labor in the town’s manufacturing plant, which perhaps offered the most and best blue-collar jobs in the area, doomed its workers to unemployment. Or new technology and machinery elsewhere might have supplanted the blue-collar workers of the plant. When laid off workers have no training available or other jobs that match their experience, their families and town spiral down economically. From the ruin of the Dust Bowl to stilled steel mills to mortgage foreclosures of the crash in 2008, upheavals in markets or demand can destroy lives. 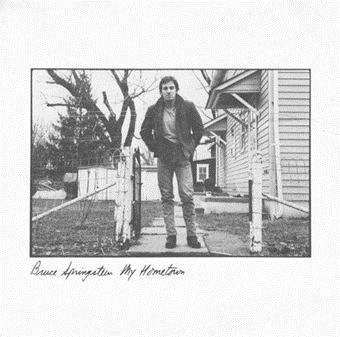 Foreseeability: We tend to think of mass destruction as unavoidable, and that view holds true for the ravages of weather and geology running amok. Try stopping Mount St. Helens! Even wars between nations or civil wars within them seem to escalate toward inevitable bloodbaths.

The destruction wrought on the song’s hometown by economic and social changes, however, came about over a couple of decades. The mayor and concerned residents, the owners of businesses and the other stalwarts of the town might have resisted or delayed the downward spiral, such as by investments in technology, retraining, marketing, tax policy or changes in the mix of goods and services produced – perhaps – but the sad decline evoked by the song tells us that foresight, funding, and political will faltered. In truth even if the migration to lower-cost textile factories had been foreseen, and it probably was by economists and owners of textile plants, the competitive onslaught of much lower costs was well-nigh unstoppable.

When thousands of Marines stormed ashore into the bullets of a heavily-defended beach, awful destruction spread far and wide. Words were passed, then a shotgun blast When one person flips out and fires a gun, the injury or death to the targe may be individual, but it is still destruction. When one furious spouse or partner hits another, it destroys the body, the soul, the heart. When one delusional Timothy McVeigh detonates a mighty bomb in Oklahoma City, 19 babies and scores of others died. The word destruction implies tangible objects being lost, but the harm may be psyches traumatized or lives lost. Anger out of control can and too often does destroy objects and people.

Springsteen’s lament captures the unravelling of a small, typical town in America. Its jobs oozed away to foreign competitors (or possibly non-union states in the South). Its social fabric was torn by the anger of racial discrimination and a racially tainted, hated war in Vietnam. Anger, resentment, and extremism can push individuals to destroy property, ruin lives, and kill people.

To consider subthemes of Destruction that are not closely associated with this rock song or the other three genre of art, please visit Additional Subthemes. Read this for more about Themes from Art.