Destruction, from "Saving Private Ryan," a movie by Steven Spielberg

Subthemes: Deaths of Humans, Planned and Purposeful, Unilateral or Not, Completely Wasteful

The graphic, terrifying, long scene at the start of the movie “Saving Private Ryan” (directed by Steven Spielberg and starring Tom Hanks) plunges the viewer into epic destruction. Here is a five-minute clip of the masterful scene. From the scene’s initial D-Day slaughter until the U.S. soldiers subdue the German defenders on the cliff tops, the screen bleeds death and destruction. 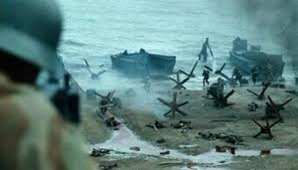 Deaths of Humans: Unlike a flood, which may cause widespread damage but take few lives, the attack on the Normandy beaches laid thousands of men in their graves. Such carnage marks the worst form of man-made destruction. Be it the nightmare Battle of the Somme where one million soldiers perished or either Gettysburg or Waterloo with 50,000 casualties each, the ghoulish efficiencies by which men kill other men in combat stands as the vilest descent of personal destruction. Bombardment, machine guns, flame throwers, mortars, mines, grenades, bayonets – the catalog of killing tools seems endless and their efficiency boundless.

Planned and Purposeful: The racial strife that polarized and paralyzed Springsteen’s hometown was for the most part the boiling over of long-smoldering resentment and anger. Probably no one in the car intended to fire the shotgun; tempers flared. But in “Saving Private Ryan,” without doubt both sides planned for months how most efficiently and quickly to kill as many enemy as possible. Military preparations concentrate on maximizing destruction of the other side and take pains to accomplish that end expeditiously and with the least harm done to their own side. On a much smaller scale, serial killers plan their campaigns of terror; those with semi-automatic weapons in Las Vegas, Sandy Hook, Parkland, and other mass shootings elaborately prepare for their atrocities. Nature, by contrast, mindlessly unspools the ferocity of physical pummelings that are unleashed by tectonic shifts, the encroachments of wind and sand, El Niño currents, polar vertexes, bulging clouds, or magma exploding through the crust.

Unilateral or Not: A firing squad acts unilaterally; the person facing the guns can’t respond. The violence of nature permits no countervailing act, only palliatives such as sandbags, fire lines, window-boardings, rooftops, and evacuations. But other manifestations of destruction present us with two or more sides, so they are bilateral or multilateral. Gang warfare unleashes retribution and battles among criminal groups, and always have at least two sides plotting and fighting to prevail. Wars for the past couple of centuries have sprawled across continents and sucked in many countries on both sides. The more participants, the more widespread the destruction.

Completely Wasteful: Some instances of physical destruction make sense. The government condemns land and carves into mountains to build roads and we don’t bemoan the scars. When carefully placed dynamite takes down an old building so that a modern one can replace it, destruction serves a constructive purpose. Often demolition or digging precedes urban renewal, harbor extensions, airport construction, building dams, and digging foundations for skyscrapers.

One generally presumes that the “old” is followed by a better “new”, although opposition by preservationists is often bitter. If condemnation for new construction ruins a historical area, displaces poor people, or rends a neighborhood that is forever blighted by the expressway, a political and social balancing of interests hopefully justifies the destruction by the potential, perceived gain.

By contrast, blowing up bunkers, exploding a landing craft, burying anti-LST barriers, or incinerating tanks with flamethrowers completely wastes physical resources on both sides. Such destruction leaves nothing positive. All weapons could have been plowshares. A country has to agree that saving democracy and liberating oppressed people is the constructive result of the massive bombing of Laos, for example.

Schumpeter’s famous observation that has been translated as “creative destruction” applies outside of business at times. If you plow under a field, or condemn some properties for an interstate highway, or drive buggy-whip manufacturers into bankruptcy, the lush planting that follows, the commerce of trucks, and the re-allocation of capital and labor to more productive work produces a net gain. Pain for the workers who are ensnared by the change, but gain for the wider community. If a plague stops an invading army, the defenders gain.

This cinematic masterpiece terrifies us with the horrendous capabilities of our weaponry to destroy everything and kill or maim everyone. The destruction it makes viscerally real pits soldier against soldier, even to hand-to-hand butchery. Viewers wince at the viciousness and agony. Modern warfare takes enormous planning and logistics, but leaves nothing but waste and death in its destructive wake.

To consider subthemes of Destruction that are not closely associated with this movie scene or the other three genre of art, please visit Additional Subthemes. Read this for more about Themes from Art.