“Citizen Kane,” starring Orson Welles as well as directed by him, has been celebrated by cineastes since its controversial release in 1941. It tracks the rise and fall of a publishing baron, Charles Foster Kane. Kane becomes astonishingly wealthy and powerful through the newspapers he led and worked on tirelessly. Several scenes from that movie depict him as top executive in various work roles. 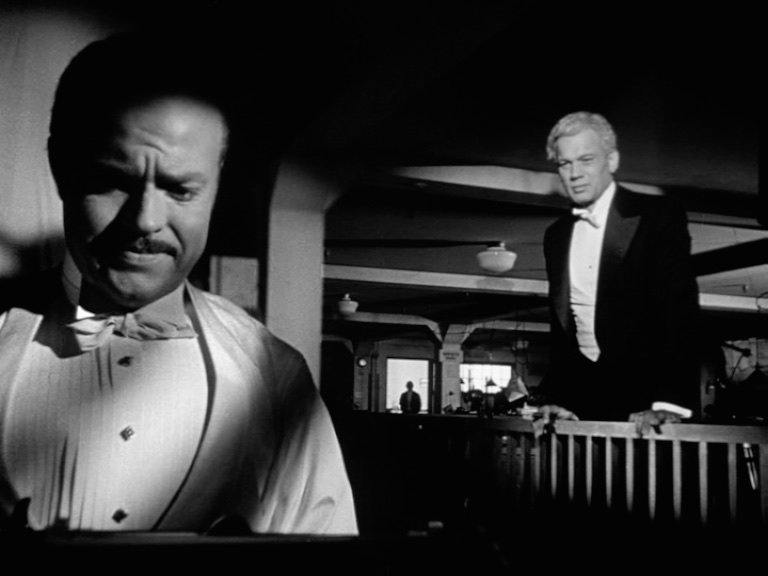 . Other aspects of the concept of work for pay reveal themselves in this scene.

Workaholic: The unrelenting ambition of Kane speaks to the consuming obsession that pushes some people to work all the time and super-humanly hard. For workaholics, their identity sits at the center of what they obsess on for a living, as what they do is their life. Far from the riverboat drop out, the fire within some people that rages to succeed in building their business, rising to the top of their company, or earning fame or fortune sometimes takes over everything and spirals out of control (such as drugs, affairs, or alcohol), or destroys family and colleagues.

Directing Others: As the owner and top executive of a newspaper chain, domineering Kane told his employees what to do. He was the boss, so he shaped editorial philosophy, invested in plant and equipment, hired senior staff, and made strategic decisions such as buying other newspapers. He bestrode his company and all his minions, the opposite of a cart driving, self-employed worker. Few people achieve such all-powerful roles in major enterprises, not even beholden to shareholders or an independent board of directors. He directed his own time and commanded the work of many others. Kane’s corporate power was virtually unlimited.

Responsibility: As someone becomes more proficient at work-related tasks, stays with the same organization, and is promoted, typically that employee takes on more and more responsibility for the success of their unit or organization. Scraping lacquer off floors has a low ceiling on accumulated responsibility, so to speak, but professionals, by contrast, can rise to the pinnacle of making decisions that affect thousands of employees, not to mention countless customers and suppliers. On the spectrum of work for pay, responsibility levels range from almost none to enormous. Everything rested on Kane’s ambitious shoulders.

Reputation: The most successful employees, athletes, or owners in the business world gain recognition, first from their peers in their industry and then sometimes in their state or country. From Henry Ford to Thomas Watson, from John D. Rockefeller to Howard Hughes, excelling at business decisions and years of hard work can elevate standouts to fame. Who doesn’t know about Steve Jobs, JK Rowlands, or Tiger Woods? Often that acclaim is coupled with accumulations of wealth, whether in stock, royalties, endorsements or investments. A few companies, such as Amazon, Facebook Google, and Microsoft became almost synonymous with public perception of their Croesus-rich founders. Coco Chanel, Karl Lagerfeld, Steven Spielberg, Oprah Winfrey – the list is long of business celebrities who worked their way into the spotlight of magazine covers.

Work and working hard permeates the career of Charles Foster Kane as he amassed power, wealth and fame. Watching “Citizen Kane,” we are transfixed by the portrayal of the hard-driving, take-no-prisoners career of a gifted man who forged a stellar work career, but who also tragically foundered on arrogant egotism and bad judgment.

To consider subthemes of Work that are not closely associated with this movie scene, or the other three creative works, please visit the post Additional Subthemes. Read this for more about Themes from Art.