Work, from "The Floor Scrapers," a painting by Gustave Caillebotte

Subthemes: Manual Deterioration, Piecework, Little or No Education, Attention to Detail, Compared to Career or Profession

The three young men in “The Floor Scrapers”, painted by Gustave Caillebotte, are laboriously removing varnish from a French floor. The work demands painstaking care and fatiguing exertion; worse, the painting depicts them toiling on a warm day. We can draw out of this evocative painting observations about work for hire. 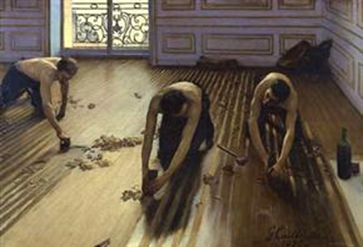 Manual Deterioration: Pressing for hours with a sharp tool to peel varnish off a wooden floor epitomizes manual labor. You slog through the task with your hands and muscles, as does a brick layer, a strawberry picker, or a ditch digger. To spend day after day on your knees bent forward and pressing down hard guarantees that your body will eventually surrender. Perhaps your spinal disc will herniate or carpal tunnel syndrome will afflict your wrist, or your knees will swell and hurt. Quite often, the repetition of an action wears down or inflames tendons, cartilage or muscle – think of a checkout person repeatedly scanning thousands of QR codes. Some manual labor ruins the entire body over time, as a John Henry shoveling coal, a coolie pedaling a rickshaw, or a person hoisting garbage pails into a truck. Many kinds of manual labor damage the body or your health, perhaps because of the conditions around you such as miners who inhale coal dust or those who dive freestyle for lobster.

Piecework: Many people who have blue-collar jobs, such as assembly-line workers in factories or delivery people, know their schedule, receive a regular paycheck, and in past decades could look forward to a pension. Nowadays, manual workers often struggle to make ends meet in the gig economy, and they earn only when they find an opportunity. Somebody has a landscaping project, needs to plant bushes, or have a house power washed before being painted. The gigger may be paid by the hour or day or perhaps by a their productivity, such as gallons of maple sap extracted or pounds of blueberries picked. We can’t know from this painting anything about the economics of this project or what the three men earned, but we can surmise that they men had to scrounge for each scraping project they could find.

Little or No Education: A defining characteristic of many manual laborers is their lack of formal education. Around the world, billions of workers attended little or no school so, because of that limitation (and probably many others), they have few choices except shoveling, picking, lugging, and occasional odd jobs such as pumping gas. Untrained and unschooled, they must accept – and may feel fortunate to find – menial work and brutal conditions such as culling bits of value from garbage mountains or picking cotton by hand. Wild-catting for gold in the Congo, growing poppies in Afghanistan, tending sheep in Turkey – without the ability to read and write, work choices are limited. Inevitably, because manual laborers are treated like a commodity, they earn a pittance and they have no advancement and few prospects.

Attention to Detail: Manual labor does not have to destroy a body; some lines of work are much safer, such as repairing cars in an auto shop or parking cars in a garage. All the cooks in restaurants are engaged in manual labor. But they require the worker to pay attention to what the hands are doing, such as knitting intricate patterns, weaving rugs, or painting trim. Manual labor is the most menial job, farthest from the cerebral work of the professions.

Compared to Career or Profession: Professionals, which could include owners of newspapers, occupy the most esteemed rung on the ladder of work, at least for most people. In sharp contrast, the young men in the painting sweating through a backbreaking day of varnish peeling had no advanced education, they were not regulated by any governmental entity, no certificate of “Approved Varnish Remover” adorned their walls like a lawyer who has passed the bar proudly displays. They had little likelihood of a doctor’s income, a lawyer’s regard, an architect’s pride, or a professor’s esteem; they were at the other end of the spectrum from the elite professions trudging day-by-day as fungible brawn.

To read about subthemes of work that are not closely associated with this painting or the other three creative works, please visit the post on Additional Subthemes.

The glimpse of a tough life told by Caillebotte’s painting highlights arduous manual labor. At an inevitable cost to themselves over time, the three workers have to concentrate on a physically difficult task. They and other laborers who exchange their health and their bodies for pennies, which comes at irregular intervals as they happen to be signed on, have little else to offer. Education, let alone professional recognition, never had a chance with them, as with the vast majority of workers in today’s world who slave along in modern serfdom.