Chance, from "“The Quai Saint-Michel and Notre-Dame,” a painting by Luce Maximilien

Maximilien captures the throng of secular bustle against the magnificence spirituality of Notre-Dame Cathedral. Daily living in the darker, lower portion of the canvas; light, glow and divinity in the upper half. Both portions portray aspects of chance.

“The Quai Saint-Michel and Notre-Dame” by Luce Maximilien 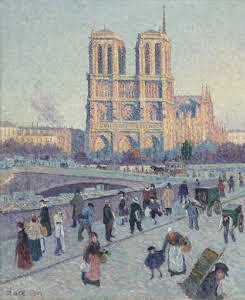 Randomness or Religion: Faithful churchgoers believe that God shepherds them through life, so what may be seemingly-inexplicable good and evil in fact fit in a meaningful, theological scheme. God may work in mysterious ways, but he works. Nonbelievers, by contrast, interpret many events in the world as physical responses to stimulants: at an unpredictable point, the tectonic plate drops, the driver texts for a second too long, the foul ball curves into a baseball fan, or the tiny thrombus forms in a vein. Things just happen, crass Casualty pushes us this way and that, randomly and without a deeper pattern of purpose or teleology. The priests of Notre-Dame preach of God’s intentionality, but the secularists walking on the Quai Sainte-Michel doubt that consumption, for example, has a theological cause or goal.

Miracles and Saints: If something extraordinary happens where we have no explanation based on physics, chemistry or other sciences, devout people may anoint it a miracle: a deathly ill person recovers, a child falls five stories without injuries, or the driver emerges unscathed from a flaming wreck. The tabloids headline a “Miracle!” That a pistol didn’t fire twice in a row in Russian Roulette could be considered miraculous for two prisoners. The underdog team defeats the state’s powerhouse; the poor person unearths a treasure chest. In legends, such as a peasant girl leading an army in France or a star of wonder over Bethlehem, unforeseeable and other-worldly quirks of chance are proclaimed miracles.

If the Red Sea parted to let the fleeing Israelites cross, or the five loaves and two fish multiplied to feed the multitudes, or the statue in Guadalupe was seen weeping tears, the faithful hail a miracle – there was no chance of those singular events happening except for the intervention of God.

Reduce Chanciness: Faced with uncertainty and the recognition that bad luck might rear up, religious believers may pray. Their faith teaches them to seek divine intercession or divine guidance. Houses of worship urge people to pray. “We raise our voices to heaven as we walk through the valley of the shadow of death!” While the faithful kneel in prayer, atheists may turn to practice and preparation – they plan for the possible eventualities chance brings so that they can help themselves. Sandbags, they argue, work better than orisons in a hurricane. Studying word lists helps more before a spelling bee than chanting a mantra. Some people neither pray nor practice to mitigate chance, but instead they connive, such as Laertes poisoning the tip of the sword wielded against Hamlet or Commodus stabbing the Roman general in “Gladiator” before fighting him. Still others try to alleviate wayward chance by relying on a variety of superstitious amulets or actions. My four-leaf clover of St. Jude’s medal will ward off chance turning against me!

In these various ways, people try to face their fear of unknown chance and the bad outcomes that it may drop on them. They try to put their fingers on the scales of fortune.

Coincidence of Meeting: Maximilien’s impressionist painting brings to mind one other subtheme of chance. We forget all the times we have walked and not bumped into someone we know, but we remember and tell others about the time we bumped into our long-lost cousin or spotted the well-known actress on the street. In crowds of people such as along the Seine at the Quai Sainte-Michel, the mixing of masses means that inevitably chance will startle someone with a completely unexpected acquaintance or notable. The encounter was pure coincidence, but we easily invest it with karma or kismet. Hardly chance, we assume, but rather a profound message interpreted as meaningful. We humans don’t think statistically as we place too much importance on coincidence “You won’t believe who I ran into today!” A life course can alter or a marriage dissolve because of a chance encounter.

The famous cathedral in Paris reminds us of the determinism of religion and that everything that happens has significance if you believe in God’s omnipotence and oversight. We have the Rosary and salah to protect us from the depredations of bad luck. Others, who adhere to naturalism, ascribe what happens to natural causes, not supernatural forces. The two camps also prepare differently when they face disturbing chances.

To consider subthemes that are not derived directly from the poem, rock song, painting, and movie covered individually in posts about Chance, enjoy these additional subthemes. Read this for more about Themes from Art.