Silence, from "For Whom the Bell Tolls," a poem by John Donne

When a funeral concludes, the tolling of a church’s bells includes the community by sounding a single bell very slowly, with a gap between strikes. The slow silence hangs between somber rings …. The final silence at the end dies achingly, like when the memorial for a fallen soldier closes with the solemnity of “Taps”. In Donne’s poem, the final three lines tell us that the quiet broken by the ringing bell links us to the end we all will share. The death of one is the death of all. The bell tolls for thee.

“For Whom the Bell Tolls,” by John Donne

No man is an island,
Entire of itself.
Each is a piece of the continent,
A part of the main.
If a clod be washed away by the sea,
Europe is the less.
As well as if a promontory were.
As well as if a manor of thine own
Or of thine friend’s were.
Each man’s death diminishes me,
For I am involved in mankind.
Therefore, send not to know
For whom the bell tolls,
It tolls for thee. 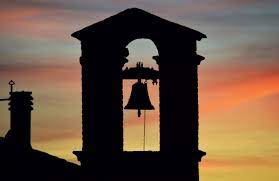 Death: Between the rings of the church bell are silences, which remind us of Death – the everlasting silence. The bell tolls for a neighbor who will never again speak, sing, hum, cry or laugh. In “Travelling Soldier”, the Dixie Chicks anti-war song, the crowd at a football game hushes a moment in silence as the names of the recent dead are read. Honoring the dead with silent meditation takes place in many cultures. And, as usual, Shakespeare offers a complex line, from Hamlet’s famous soliloquy: “When he himself might his quietus make.” that combines suicide and quieted silence. Death, the cessation of life unto the end of time.

Reverence or Awe: In the European Middle Ages, tolling bells cast many who heard them into reverential silence. In those religious times, God was palpably present. Most people instinctively fall silent before their King, the Pope or the Dalai Lama or others of such fame. If Mao, Stalin or Ozymandias appeared, a hush would fall on those in their presence. Reverence and awe or abject fear of authorities ties tongues. “The Emperor has no clothes” not only bared the truth, it broke the awe-inspired silence. Children face to face with their sports or movie idol might be dumbstruck. The CEO who appears on the shop floor or the brigadier general in the mess hall carries such awesome authority to assembly-line workers or grunts that they can only gawk. Silence in the presence of esteemed renown acknowledges the awe (or fear) they inspire.

Cessation: The guns of war fall silent – good; the birds of “Silent Spring” go silent – bad. But both cessations indicate stopping. When fans turn off, muzak stops, combustion motors don’t fire, we become aware of cessation by how the constant hum around us falls or ends. We have all experienced the eerie missing background when the electricity cuts off and the clock doesn’t tick. Silence in our noisy, civilized world often means a dramatic change – a power line has gone down, the ventilator pumps air no more, or the heart monitor flatlines and ceases.

Prayer: A lone church bell sounds slowly in the background during prayer. For people who meditate or pray, those periods of silent communion rank as the most sublime. Prayers offered up without words serve as a private message to one’ God. Neither grammar nor punctuation nor vocabulary matter in the silent pleas of prayer. The ceremonial prayers before important events, such as the start of a new Congress, merges authority and religion in silence. Unlike the silence of alienation, prayer is outward silence but inward communion.

John Donne’s classic takes up death, the perpetual silence, and how anyone’s death diminishes each of us. The metaphor of the slow sounding of a bell, punctuated by the silence between each peal, conveys the end that awaits all of us.

To consider subthemes of Silence that do not associate closely with this poem or the other three genre of art, read additional subthemese. Read this for more about Themes from Art.