Death, from "House of the Hanged Man," a painting by Paul Cezanne

The House of the Hanged Man by Paul Cezanne associates its subject with death. The man who lived in the cottage was executed by hanging, presumably by the French authorities and presumably for having committed a serious crime. We can derive related subthemes of Death from that plausible background. 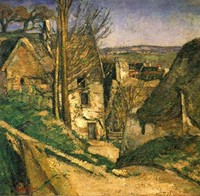 Capital Punishment: When a judge orders a convicted criminal to be executed, that sentence carries out the government’s ultimate power. To “put to death” a person goes beyond sending troops to battle because most soldiers will return; no one survives hanging, electrocution, or lethal injection. Capital punishments carried out in many countries have declined over the past few decades because of concerns about inequities, cruelty, lack of deterrence, and systemic abuses in judicial systems. It is possible that extra-legal lynchings, such as the ambush of Bonnie and Clyde far outnumber judge-ordered executions. Someday, viewers may feel revulsion and disbelief at the barbarity referenced by the hanged man’s house.

Murder: In criminal codes, murder requires an intention by someone to cause the death of someone else. Murders play a huge part in operas and tragic literature such as Tosca’s lover shot to death in a “fake” execution or Cordelia hung at the end of King Lear. Lesser crimes include manslaughter, where the death of someone resulted from culpable negligence. Nowadays, you can have lawsuits based on violations of the deceased’s civil rights or a civil suit for wrongful death, such as the one against O. J. Simpson.

Mass Deaths: Wars, Pandemics, Natural Disasters: In countries governed by law, it takes a trial, evidence, a jury, appeals and due process to hang someone. No one takes capital punishment lightly. By contrast, wide-scale slaughters of people happen with discouraging frequency. Stalin, a butcher of inconceivable proportions, allegedly remarked that “The death of one man is a tragedy, the death of millions is a statistic.” When honey died, it was a tragedy. As examples of mass deaths, World War I claimed upwards of 20 million souls, while the second World War’s fatalities, including battle deaths and civilians of all countries, exceeded 50 million. In a matter of hours, Hiroshima’s atomic blast incinerate on the order of 100,000 residents. As John Donne wrote, poison, war and sickness trudge beside Death.

The plague swept away one third of the population of Europe, an estimated 75–200 million people in Eurasia and North Africa in the middle of the 14th century, while the flu pandemic of 1918 merely killed upwards of 40 million. Aside from wars and disease, Mother Nature can be most cruelly unmaternal. A volcanic eruption erased something like 2,000 people in Pompeii, which was but a fraction of the 140,000 or more fatalities from the 1923 temblor in Tokyo. Historians estimate that about 1 million Irish died during the potato blight famine. But mass deaths have other causes. Nazi concentration camps, collectivization, and periodic genocides have murdered huge numbers of people.

Cézanne’s painting brings to mind the dark sides of death: exercise of the ultimate judicial power, criminal codes based on degrees of intentionality, and even mass death events. Death surrounds a painting that hangs in the Louvre about a man who was hanged.

To consider subthemes of Death that are not associated with this painting song movie or poem or the other three creative works discussed in this set, please visit Additional Subthemes. See this for more about Themes from Art.