Under smoke billowing from their coal-fired boilers, impressions of dark trains fill a cavernous terminal. They have disgorged passengers and freight arriving in Paris and will take on a new load, then rumble from the capital throughout France. This painting, La Gare St. Lazare by Claude Monet (at the Art Institute of Chicago) , encourages us to roll out several subthemes of Trains. 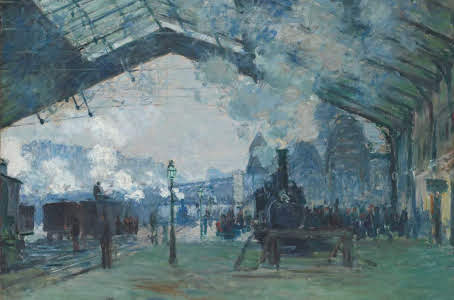 Construction: The train station depicted in Monet’s painting had to be built, which may have required the demolition of pre-existing buildings. Once the right of ways for the tracks to enter the station were obtained, the land had to be prepared and planted with tracks. Unlike humans and horses, who can make their way through any terrain, a train can only run on a graded surface, with tracks and ties laid securely, on gradual slopes that are manageable for the train’s pulling and braking power. Major parts of its path necessitate carving slopes, filling depressions, fortifying track bed, or boring tunnels. Those requirements demanded decades of massive construction projects.

Along with all that heavy-duty clearing and building, projects such as bridges to carry trains across gorges and rivers or paring through hillsides demanded sophisticated engineering skills and enormous effort. Thousands of men labored for years to span our country with rails, including linking the coast with a golden spike[1] and crisscrossing the country.

Massive Investments: All the construction work sketched above, and everything pictured in La Gare St. Lazare cost money. The companies that managed the steel steeds needed cash flow and massive infusions of money from bond or stock offerings to erect their factories, secure their raw materials, spread their tracks, and employ their workers. At times, governments sold bonds to construct pieces of the national rail network. The massive buildout of infrastructure that enabled trains to serve a country, which spurred the cognate industries that enabled everything railroad, were costly capital investments that had to be financed.

Complementary Industries: Behind the scenes of Monet’s painting, many other industries made possible the spread of railroads. For example, the train cars themselves, the silver ribbons they clung to, and the soaring bridges they roared over demanded millions of tons from the steel industry. The stoked boilers of the engines gobbled coal at a prodigious rate and drove that mining industry to scour the globe. The massive requirements for sculpting the land so that trains could rumble by employed tens of thousands of people and small armies of equipment. Even the meals they served and the amenities available to passengers constituted a sector of the economy. In short, the railroad industry spurred the expansion of many complementary sectors of the business world.

Monet’s study of light and smoke reminds us of the massive amount of man-made artifacts, related businesses, and massive spending that accompanied the flourishing of national railroads. Over several decades from the mid-1850s, the development of rail networks represented economy-transforming allocations of resources.

If you are interested in subthemes of the concept “Trains,”, consider other subthemes that don’t fit as directly to the poem, painting, rock song, and movie written about in this series. For an overview of this project, this article explains Themes from Art.

[1] A golden spike was driven at Promontory, Utah, to signal the completion of the first linkage of railroads across the American continent. NARA 16-G-99-2-1, Still Picture Branch. (View in National Archives Catalog)