Trains, from "City of New Orleans," a song sung by Willie Nelson

A nostalgic, sorrowful song, “The City Of New Orleans” recalls the grander days of railroad travel, now in terminal decline. With references to old people, old cars, and bad dreams, the song mourns a once-dominant industry, proud to have played a prominent role in the maturing of America, but that has run its course. Several concepts of Train roll through the song.

Riding on the City of New Orleans
Illinois Central Monday morning rail
Fifteen cars and fifteen restless riders
Three conductors and twenty-five sacks of mail
All along the southbound odyssey
The train pulls out at Kankakee
Rolls along past houses, farms and fields
Passin' trains that have no names
Freight yards full of old black men
And the graveyards of the rusted automobiles

Good morning America how are you?
Don’t you know me I’m your native son
I’m the train they call The City of New Orleans
I’ll be gone five hundred miles when the day is done

Nighttime on The City of New Orleans
Changing cars in Memphis, Tennessee
Half way home, we’ll be there by morning
Through the Mississippi darkness
Rolling down to the sea
But all the towns and people seem
To fade into a bad dream
And the steel rails still ain’t heard the news
The conductor sings his songs again
The passengers will please refrain
This train’s got the disappearing railroad blues

Listen to the iconic version sung by Willie Nelson. 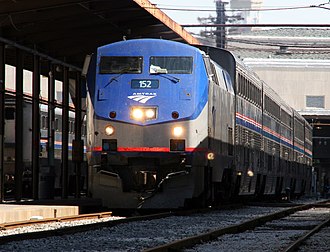 Train Travel: The length of the trip on the City of New Orleans, between that city and Chicago, is approximately 835 miles (1344 kilometers). In this decade, the average train ride between those two cities takes almost 20 hours.

Back in the day, much of the nation rode the rails. The song mention sons traveling, but also

Professional sports teams took trains to distant games. Comfortable sleeping cars were available. Now, many more people commute by train than travel on them long distances. In the Tri-state area alone, hundreds of thousands of workers commute by local trains.

Gale of Creative Destruction: Joseph Schumpeter famously described how one industry or company supplants another in the ongoing, fierce struggle of capitalism. As an example, trains wiped out canals. In the song, the slow decline of railroads, at least for carrying passengers, appears as the steel rails still ain’t heard the news … about the disappearing railroad blues. Once heralded as the native son of America, trains declined as cars became ubiquitous; Americans wanted the freedom and flexibility to drive as they chose rather than abide by a scheduled, city-to-city train. Railroad stations turned seedy and passenger numbers wilted. Even the throngs of business people and others flowing along the BosWash corridor could not sustain passenger trains on their own, but required Amtrak to be heavily subsidized.

Once the trucking industry put thousands of big-wheelers on the road, trains lost much of their freight, leaving them mostly to carry bulk products such as coal, wheat, and timber, and inter-modal containers. Trains also had to contend with powerful unions, which neither the automobile nor the trucking industries faced to the same degree. In large part, America’s herds of steel steeds have been put out to pasture.

Technology: The wonderful phrase magic carpets made of steam evokes the very earliest source of power for locomotives – burning coal or wood to boil water that moved the pistons and turned the locomotive wheels. Later came diesel fuel, then electricity, then combinations of the two. Aside from the fuel, throughout the heyday of the train industry, scientists and engineers kept improving every aspect of the locomotives, the cars they pulled, as well as the rails, fasteners, and ties supporting them. Thousands of patents have been granted in the railroad domain, a statement to the technology improvements that have driven the railroad industry.

Government: The Spirit of New Orleans carried twenty-five sacks of mail for the U.S. Postal Service. Those sacks hint at the omnipresent influence of the Federal government on interstate commerce, the quintessence of what made railroads profitable. Railroad tracks are a public utility, as it only practical to allow a single railway easement between cities, and therefore the federal government from the earliest days regulated the industry. The regulators set rates, established safety standards, monitored competition and practices, and otherwise tried to balance the profitability of the companies against the protection of a vital public good. Government involvement in the expansion of the railway system in the United States depended not just on regulatory oversight but also on patent protection, courts of law, statutory rights and responsibilities, and the financial markets. Sometimes, the largess minted by railroads corrupted politicians with graft. Mostly however, the government maintained the framework for the continued viability of railroads.

A folk-hero train has been memorialized for its grand shuttle through the middle of the country, between the Windy City and the Big Easy. Yet railroads peaked in popularity and importance years before; despite continual improvements in every feature of their build and significant government backing, they were substantially displaced by cars, trucks, and transport planes.

If you are interested in subthemes of the concept “Trains,” consider other subthemes that don’t fit as directly to the poem, painting, rock song, and movie written about in this series. For an overview of this project, this article explains Themes from Art.