Churches, from "California Dreamin'", a song by The Mamas & the Papas

Depressed on a bleak winter day and confronting an wrenching decision, a singer who yearns for the warmth and comfort of Los Angeles (or a sign of what to do), finds momentary respite in a church. Even though he dismisses the teachings of that religion and prayer, at that low point in his life, the church consoles him and the preacher’s presence gives him comfort.

“California dreamin',” by The Mamas & the Papas

Stopped into a church
I passed along the way
Well, I got down on my knees (Got down on my knees)
And I pretend to pray (I pretend to pray)
You know the preacher liked the cold (Preacher liked the cold)
He knows I’m gonna stay (Knows I’m gonna stay)
California dreamin' (California dreamin')
On such a winter’s day

Prayer: The major religions of the world, the “Sea of Faith”, encourage their adherents to raise their thoughts, to pray. In the song, the chilled visitor fakes it – And I pretend to pray – but for millions of people the act of praying fortifies and guides them, or urges help and supplication for someone who is in need, or pleads directly for support and hope. Saying the Rosary does all this for Catholics; the prayer of Psalm 23, the Lord’s Prayer, graces many Christians. Visitors to a church are welcome to commune in prayer, but they can avail themselves of that act anywhere, any time. 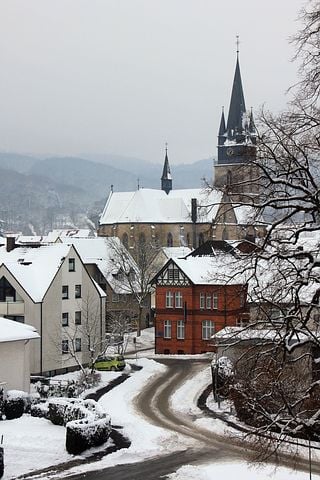 Clerics and Lay People: The song only mentions the preacher, but each church building may employ a variety workers, including ministers, priests, leaders of music, secretaries, maintenance workers, teachers and associated educational staff, and others. Possibly monks and nuns, or their counterparts, are also attached to a church. Most denominations distinguish between clerics, who have undergone training and have earned the right to administer sacraments and preach, and the laity, members of the congregation. Some laity hold intermediate positions: for example, Presbyterian churches have Elders and Deacons. A layer of administrators oversees large denominations, with bishops, cardinals and the like for the Catholic Church, culminating in the Vatican and the Pope.

Absolution and Counseling: Catholics believe in confession and confessing their wrongs to a priest, who can absolve them. Other Christian denominations acknowledge ministers as spiritual counselors but don’t grant an equal power to their ministers to wipe away wrongdoing. The preacher in “California Dreamin’” would have welcomed the chance to help the morose visitor. Other religions believe their clerics possess a range of powers when it comes to addressing improper behavior.

Welcoming: Most congregations embrace newcomers and would like to add them to their flock. If a newcomer shows up, they are welcomed and made to feel at home. New members events and classes are formal parts of the onboarding efforts. As for the singer in the song, the preacher knows he’s gonna stay; I’m not sure that the preacher reads the situation correctly – the stay may be only until warmth rekindles. But the warm embrace of those in the pews and the pulpit is palpable.

This melancholy song follows a singer, wrestling on a dreary winter day over whether to break up with his girlfriend and return to sunny California, drops into a church on a whim. Why he does so is unclear. Perhaps he went to church as a child and it represents consolation, or he seeks guidance regarding what he should do, or perhaps he hopes merely to thaw out. Church in this song has an allusive, poetic role.

If you are interested in other view on the concept “Religion,” consider other subthemes that don’t fit as directly to the poem, painting, rock song, and movie written about in this series. For an overview, this article explains Themes from Art or click on the navigation bar, “About.”