Churches, from "On the Waterfront," a movie with Marlon Brando

In a brutal movie, On the Waterfront, Terry Malloy (Marlon Brando) fights back against union crime and dockside violence, a brave Father Barry (Karl Malden) and his church stand up for Brando and hold together the frightened, downtrodden dockworkers. Several subthemes of Churches appear in this movie.

In the hold of a ship being loaded, Father Barry mourns the murder of a good man and draws on the teachings of Christianity to try to win over the frightened dock workers.

Sanctuary: In many societies, a site of worship typically offered protection to those who sought safety within its walls. At other times, such as at the fall of Drogheda where a group who barricaded themselves in the steeple of St. Peter’s Church were burnt alive by Cromwell’s troops, the protections of religious buildings meant nothing. Still, as with embassies these days, royalty, brigands, and roaming armies generally honored the sanctity of a temple and those who found refuge within its walls. Note that the word “sanctuary” has a double meaning: the holiest part of a chancel and a refuge. The wisdom of a faith guides those who believe; the walls of a sanctuary protect those who shelter. 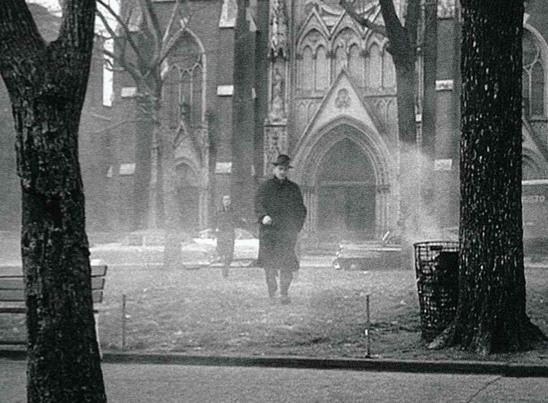 Living Properly: One hears in houses of worship the precepts of how to live a proper life; those commandments come pouring out of the Bible, Torah, and Quran, for example, and the clerics and preachers who interpret and promote those lessons. In various scenes from “On the Waterfront,”" the Catholic priest (Karl Malden) speaks eloquently about resisting evil, standing up to force, and showing solidarity against wrongdoing. His wisdom drew on the “Sea of Faith” that Hardy’s poem evokes. In a church (or any place of religious worship), the members of the church receive such guidance or mandates for serving God or Mammon, choosing right versus wrong, attacking infidels, or living for heaven versus hell.

Privilege of Clerics: “On the Waterfront”" depicts a lawless harbor worksite, subjugated by a crooked and cruel union. Even so, if the union leaders were ever tried in court, the judge would not allow what was said to a priest in confession to be disclosed. Courts and law enforcement officers cannot force a priest or other cleric to divulge what was said to them in confidence by a member of the church. Legal systems support the clergy-penitent privilege for public policy reasons similar to why they enforce the doctor-patient privilege, the attorney-client privilege, and the spousal privilege: people need to be able to confide in professionals or spouses and not fear that those admissions or intimacies might be testified to in court.

The Catholic church where Marlon Brando and his fellow workers gather for protection, guidance, and encouragement stood for good against a strong-armed, venal union leadership. Its brave priest stood up for Christian values and was murdered for doing so. Martyrs can make a difference.

If you are interested in more about the concept “Religion,” consider other subthemes that don’t fit as directly to the poem, painting, rock song, and movie written about in this series. For an overview, this article explains Themes from Art or click on the navigation bar, “About.”