Churches, from "The Church at Essoyes," a painting by Pierre-Auguste Renoir

A pastoral depiction of a church’s tower and chancel fills the central portion of Renoir’s French landscape. The bell tower glows in sunshine and the rest of the church at Essoyes nestles beneath it. With a prominent tree in the foreground of the painting and a modest, partial cottage on the left, the painting symbolically offers a triptych of man, nature, and religion, with the church predominant. Drawn from this impressionist painting, here are some thoughts on Church as a theme.

The Church at Essoyes, by Pierre-Auguste Renoir 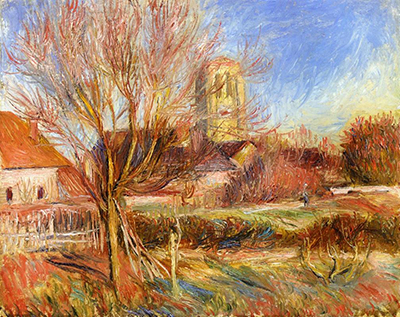 Defines the Proper Life: As places of worship for followers of a religion, churches dominated the lives of everyone who lived for the past millennia. Whether a synagogue for Jews, a basilica or cathedral for Christians, a mosque for Muslims, a chapel (a place of worship that has no pastor or priest and no permanent congregation) for the military, or a temple shrine in Japan, they all share being a structure for a religious gathering led by a cleric. As the “Sea of Faith”, the church – meaning an institution and administration of a religion rather than a physical place – decreed morality and punished heretics. For example, Puritans and Calvinists believed feared going to Hell and adhered to rigid propriety (see The Scarlet Letter). People who attend church believe in the preaching from the pulpit. The church loomed over and structured their lives, both public and private. Consider the elaborate laws of Judaism and keeping kosher or praying toward Mecca five times a day. Morality consisted of religious precepts taught in church.

Hub of Social Life: In many villages or neighborhoods of cities, the local church anchored the social life of its parishioners. Not only were milestones such as confirmations, marriages, weddings and funerals celebrated in them, but also secular events, such as the social hour after a church service, Sunday school, scout meetings, bridge clubs, vacation bible school, bingo, plays, organ recitals, meetings about corrupt unions and a multitude of other events, took place within the church. Meetings to debate secular issues were held in churches. Choir practices and dance classes could flourish in churches. Renoir’s painting hints at the symbiosis of sacred and secular life by how comfortably the church nestles in the scene.

Outreach and Serving: Not only did a constant stream of social events take place under the roof of a church, but it also housed or promoted many forms of community service. Food banks, schools, counseling services, donations to the poor, and other outreach were organized, sustained, and conducted by members of the congregation. Churches did not pay property taxes, but they gave back to the surrounding area. Towns served the church and the church served them.

Honoring Deity: In many societies, the grandeur and beauty of the church conveyed the adoration church members felt for whatever deity they worshiped. Soaring buttresses, gorgeous stained glass, intricate mosaics and soaring minarets, statuary and carvings, all conveyed that depth of adoration. Local populations for centuries poured funds into the construction, furnishing, staffing, and maintenance of their church. Some came into being because a powerful person wanted to express gratitude, such as the Basilica of Sacré-Cœur in Paris. The modest church in Renoir’s rendering shows none of the opulence and majesty of famous churches, but it probably matched the wealth and aspirations of its rural surroundings. 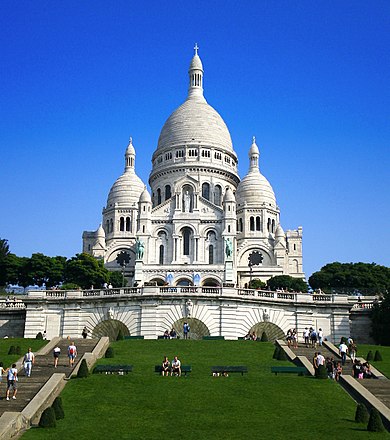 Renoir’s painting suggests the centrality to a community of the physical church. That building often occupied the core of the town and promoted many of the activities within its walls and radiating out to the surrounding areas.

If you are interested in more about the concept “Religion,” consider other subthemes that don’t fit as directly to the poem, painting, rock song, and movie written about in this series. For an overview, this article explains Themes from Art or click on the navigation bar, “About.”