Birds, "Ode to a Nightingale," a poem by John Keats

Depressed, discouraged, even mulling suicide, Keats ruminates on the melodious happiness of a nightingale. He finds short-lived solace from the woes of the world – even inspiration to carry on – from the chill bleakness when the bird Singest of summer in full-throated ease. But Keats can’t be sure he didn’t imagine the reprieve of happiness. The poem suggests other implications of Birds.

“Ode to a Nightingale” by John Keats

My heart aches, and a drowsy numbness pains My sense, as though of hemlock I had drunk,
Or emptied some dull opiate to the drains One minute past, and Lethe-wards had sunk: ‘Tis not through envy of thy happy lot, But being too happy in thine happiness,— That thou, light-winged Dryad of the trees In some melodious plot Of beechen green, and shadows numberless, Singest of summer in full-throated ease.

O, for a draught of vintage! that hath been Cool’d a long age in the deep-delved earth, Tasting of Flora and the country green, Dance, and Provençal song, and sunburnt mirth! O for a beaker full of the warm South, Full of the true, the blushful Hippocrene, With beaded bubbles winking at the brim, And purple-stained mouth; That I might drink, and leave the world unseen, And with thee fade away into the forest dim:

Fade far away, dissolve, and quite forget What thou among the leaves hast never known, The weariness, the fever, and the fret Here, where men sit and hear each other groan; Where palsy shakes a few, sad, last gray hairs, Where youth grows pale, and spectre-thin, and dies; Where but to think is to be full of sorrow And leaden-eyed despairs, Where Beauty cannot keep her lustrous eyes, Or new Love pine at them beyond to-morrow.

Away! away! for I will fly to thee, Not charioted by Bacchus and his pards, But on the viewless wings of Poesy, Though the dull brain perplexes and retards: Already with thee! tender is the night, And haply the Queen-Moon is on her throne, Cluster’d around by all her starry Fays; But here there is no light, Save what from heaven is with the breezes blown Through verdurous glooms and winding mossy ways.

I cannot see what flowers are at my feet, Nor what soft incense hangs upon the boughs, But, in embalmed darkness, guess each sweet Wherewith the seasonable month endows The grass, the thicket, and the fruit-tree wild; White hawthorn, and the pastoral eglantine; Fast fading violets cover’d up in leaves; And mid-May’s eldest child, The coming musk-rose, full of dewy wine, The murmurous haunt of flies on summer eves.

Darkling I listen; and, for many a time I have been half in love with easeful Death, Call’d him soft names in many a mused rhyme, To take into the air my quiet breath; Now more than ever seems it rich to die, To cease upon the midnight with no pain, While thou art pouring forth thy soul abroad In such an ecstasy! Still wouldst thou sing, and I have ears in vain— To thy high requiem become a sod. Thou wast not born for death, immortal Bird! No hungry generations tread thee down; The voice I hear this passing night was heard In ancient days by emperor and clown: Perhaps the self-same song that found a path Through the sad heart of Ruth, when, sick for home, She stood in tears amid the alien corn; The same that oft-times hath Charm’d magic casements, opening on the foam Of perilous seas, in faery lands forlorn.

Forlorn! the very word is like a bell To toll me back from thee to my sole self! Adieu! the fancy cannot cheat so well As she is fam’d to do, deceiving elf. Adieu! adieu! thy plaintive anthem fades Past the near meadows, over the still stream, Up the hill-side; and now ‘tis buried deep In the next valley-glades: Was it a vision, or a waking dream? Fled is that music:—Do I wake or sleep? 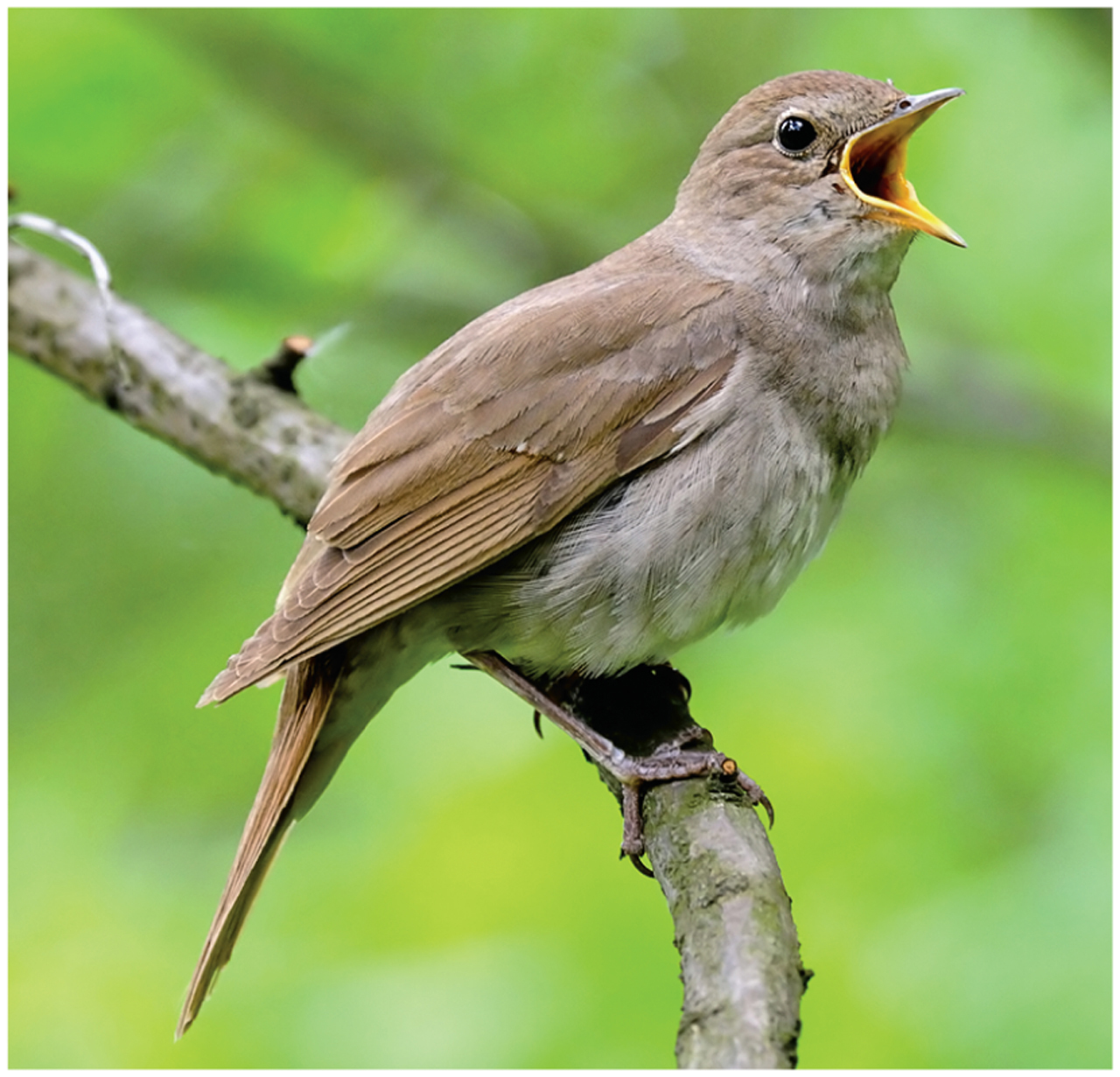 Tuneful: Each species of bird chirps in a distinctive pattern so the world hears a chorus of bird “songs.” One famed ornithologist could recognize more than 2,000 different calls of birds. Undoubtedly, many more can be heard around the world. Birds make their calls to attract mates, to locate other birds, to warn of cats, or perhaps to enjoy singing to the sky. Along with recognizing a species of bird by its call, some people learn to imitate bird calls. According to Wikipedia, “The distinction between songs and calls is based upon complexity, length, and context. Songs are longer and more complex and are associated with territory and courtship and mating, while calls tend to serve such functions as alarms or keeping members of a flock in contact.” For Keats, The voice I hear this passing night served as a possible therapeutic moment.

Cheerful: Nearly all bird calls sound cheerful and happy. In the poem, the nightingale is

pouring forth thy soul abroad In such an ecstasy!

The small creatures sing out a brief melody, over and over, the same mixture of sweet tones in a plaintive anthem. A song has a high pitch and can be quite complicated. True, crows erupt with raucous calls and undoubtedly the sounds other birds emit do not please everyone’s ears, but for the most part a bird trilling offers a sound thrilling.

Carefree: In a romanticized encounter with a nightingale, Keats contrasts its perceived happy and carefree naturalness to the depressing, frightening worries of humans.

Thou wast not born for death, immortal Bird!
No hungry generations tread thee down;

The weariness, the fever, and the fret
Here, where men sit and hear each other groan;
Where palsy shakes a few, sad, last gray hairs,
Where youth grows pale, and spectre-thin, and dies;
Where but to think is to be full of sorrow
And leaden-eyed despairs,

But the actual life of most birds belies this joyous, Peter Pan image. They have to find food constantly, they have to endure cold winters, and they face predators of all kinds. Birds in nature struggle to survive.

Keats suffers from a bleak world view without happiness, only a physical decline to death. Suicide flirts. But a wondrous song from a nightingale – perhaps real, perhaps not – draws him in reverie to contrast its perceived joy with his own dark thoughts.

If you are interested in other thoughts on the concept “Birds,” consider other subthemes that don’t fit as directly to the poem, painting, rock song, and movie written about in this series. For an overview, this article explains Themes from Art or click on the navigation bar, “About.”