Friends, "Luncheon on the Grass," a painting by Édouard Manet

Édouard Manet’s painting, “Luncheon on the Grass” (Le Déjeuner sur l’herbe), shows two gentlemen reclining in comfort in a glade, munching and chatting amiably as good friends do. They are enjoying themselves. Jarringly a nude woman sits beside them and another splashes in a pool a bit behind them. The two men appear oblivious to them, so let’s consider this surreal picnic scene for how it suggests several points about friendships. 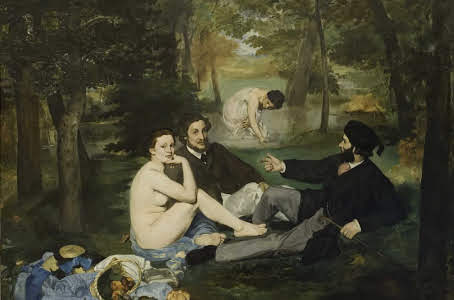 Support, Guide, Therapist: The gentlemen lounging comfortably on the grass appear utterly at ease with each other, enjoying relaxed time together, chatting and gesturing, liking each other as close friends. A close friend is someone whom you can call on when you need advice, consolation, cheering up – they are “there for you”. As James Taylor sings,

And I’ll be there
You’ve got a friend.

One could say that a good friend helps support you during the negative periods of life. “Now when you’re feeling low and the fish won’t bite,” when you hang your head blue, a good friend steps up and is good for guidance as well as your soul.

On the positive side, friends enjoy each other’s company. They like each other and what they share together. Further, a best friend, a devoted friend, does thoughtful things for you without you having to ask. Bringing soup when you are sick, flowers on your first day of a job, an article about your favorite team, offering to keep your dog when you have to leave town suddenly, or buying the makings of a surprise picnic in a park.

Neighbors, Colleagues and Acquaintances: Close friends are treasures whom we nourish despite distance, tumult or time passing (not just at reunions, howsoever life churns on. Lesser degrees of affection abound, but they don’t rise to the fond attachment to a “friend”. We exchange words with neighbors, we make acquaintances, we work with colleagues, we bicycle with companions, and we attend church, the PTA or clubs with fellow members. These terms of familiarity help us recognize and articulate the nuances that describe people we know and for whom we have a degree of affection. A tested, enduring friendship, however, provides much more emotionally and deserves much more. Dear friends are jewels. During their life, most people don’t have the fortune to bedeck themselves with more than a handful of true friends.

Balanced Two-Way Street: Was either man in the painting keeping track of who made which foods for the picnic or who spent how much? Close friends forget tallies of the amount or frequency of what they do for each other, although ultimately, in a balanced relationship that lasts, the flows of support exhibit sufficient symmetry to sustain the attachment. Each person gets what she needs, or else the bond withers away. One person cannot be a net taker and the other mostly the giver. Instead, a balanced back and forth of offering what the other person manifests over time. Among other disabilities, if you suffer from narcissism, immaturity, or have a heart of stone, you won’t have true friends because the street runs only one way.

A genuine friendship is not calculated and instrumental, let alone false such as Iago to Othello. A friendship blooms with flowers given to the other because you cherish your friend and want your friend to be happy.

Women Compared to Men: I don’t wish to promote sexist stereotypes, but a common perception holds that women relate differently to their women friends than men relate to their male friends. Women talk with each other, head-to-head, and relatively more often about feelings and relationships. Unlike the two fellows across from each other in Manet’s painting, men tend to hang with male buddies side-by-side watching a sport or playing a game (poker, tennis, golf) and are more prone to engage in teasing banter, one-upmanship, and fact comparisons (details about cars, intricacies of stereo sound systems, beers, home repairs or arguments about crops and money). Women often develop deeper networks of women friends as they delve into emotional, personal topics; men’s friendships often spring more from proximity, sports, and transactions. In styles of friendships, as in modes of conversation, it often appears that men are from Mars, women are from Venus.

Manet’s painting, a sensation when it was displayed in Paris (in part because of the wholly unexpected females), depicts what appears to be two close friends enjoying a picnic. Both men may have worked equally to bring about the pastoral scene.

If you are interested in other thoughts on the concept “Friends,” consider other subthemes that don’t fit as directly to the poem, painting, rock song, and movie written about in this series. For an overview, this article explains Themes from Art or click on the navigation bar, “About.”