A poem by Oliver Wendell Holmes, intended to save the venerable warship, the USS Constitution, from being dismantled, conveys some of the blast and blood of naval warfare. Old Ironsides and its 44 guns holds the honor of being the world’s oldest ship of any type still afloat. This famous We can draw other concepts related to Sailing Ships from the poem.

Ay, tear her tattered ensign down!
Long has it waved on high,
And many an eye has danced to see
That banner in the sky;
Beneath it rung the battle shout,
And burst the cannon’s roar;—
The meteor of the ocean air
Shall sweep the clouds no more!

Her deck, once red with heroes’ blood
Where knelt the vanquished foe,
When winds were hurrying o’er the flood
And waves were white below,
No more shall feel the victor’s tread,
Or know the conquered knee;—
The harpies of the shore shall pluck
The eagle of the sea!

O, better that her shattered hulk
Should sink beneath the wave;
Her thunders shook the mighty deep,
And there should be her grave;
Nail to the mast her holy flag,
Set every thread-bare sail,
And give her to the god of storms,—
The lightning and the gale! 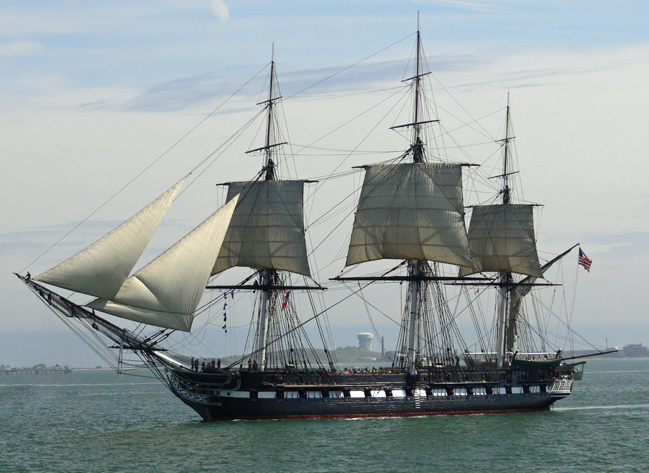 Navies: The USS Constitution earned the nickname “Old Ironsides” in a War of 1812 brawl in the North Atlantic, when burst the cannon’s roar of the British line ships, but their balls appeared to bounce off her “iron” sides. While armies battled in that war on land, as in other broad conflicts, the enemies’ navies clashed on the seas. Here are three historic naval battles where ships that sailed battled and the outcomes changed history.

The Battle of Salamis in 480 BC pitted an alliance of Greek city-states under Themistocles against the Persian Empire under King Xerxes. The momentous victory by the alliance helped to end the war between the Persians and the Greeks.

A depiction of the 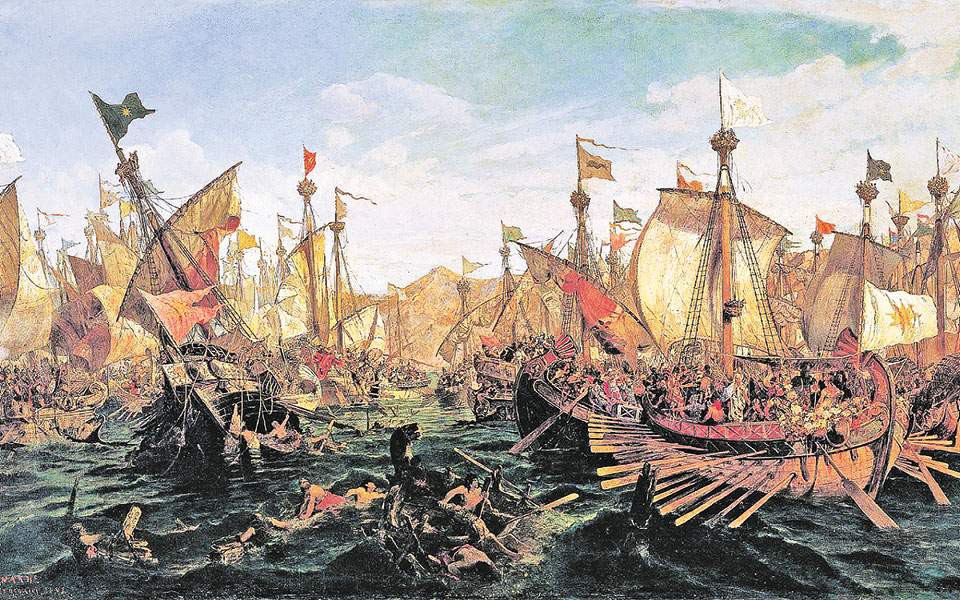 comes from a history site.

The Battle of Lepanto took place on October 7, 1571. A fleet of the Holy League, a coalition of Catholic states arranged by Pope Pius V, inflicted a major defeat in the Gulf of Patras of southwestern Greece on the fleet of the Ottoman Empire.

The Battle of Trafalgar was fought on October 21, 1805, between the navies of France and Spain on one side, and Great Britain on the other. Its overwhelming victory opened the way for Britain to dominate as the world’s sea power for the next century.

Cannon broadsides were the ultimate weapon for naval warships. The Battle of Arnemuiden, fought between England and France in 1338 at the start of the Hundred Years' War, was the first recorded European naval battle that used artillery. An English ship, barely larger than a modern sloop boasted three cannon and one handgun. War ships grew bigger and carried more awesome firepower. A Spanish monster in the early 19th century, Santísima Trinidad, eventually bristled with 140 cannons. She was the heaviest-armed ship in the Age of Sail. Ships also carried sharp-shooters to pick off the enemy as well as boarding parties so that once grappling hooks held the ships together or two ships rammed, sailors could clamber across to invade the other ship and spill heroes’ blood. From the 14th to the 19th century, the roar of cannons and the shots of snipers decided naval battles.

Privateers and Pirates: Privateers evolved as hybrids of government navies and civilian pirates. We can learn from Britannica that a privateer was a privately-owned ship commissioned by a government to carry out quasi-military activities. A renowned privateer was the English admiral Francis Drake, who made a fortune plundering Spanish settlements in the Americas in the late 16th century.

Corsairs were similar, although the term carried a religious or geographic connotation because the conflict cast Muslim against Christian powers. Some of the most notorious corsairs were the Barbary corsairs of North Africa, who were aligned with the Ottoman Empire. On the Christian side the Knights of St. John, based in Malta, harassed Muslim commercial shipping in the 16th and 17th centuries. As the term “corsair” pertains to the Mediterranean, the term “buccaneer” is specific to the Caribbean and the Pacific coast of Central America. Over time, the buccaneers migrated to base ports on Tortuga, an island off the coast of Hispaniola, in 1630. The line between government-sponsored plundering on the high seas and private criminality blurred.

Pirates were on their own. Inevitably, with treasures floating across the seas, pirates seized the opportunity to enrich themselves. Brigandage was their game, not on the highways, but on the high seas. A few acquired their ships by mutiny. At the height of Atlantic piracy around 1720, some 2,000 pirates were attacking ships and threatening trade, including such legendary pirates as Blackbeard and Captain Kidd. Lawless and brutal, pirate ethics could be summarized as “No mercy, just mercenary,”" even to the exaggerated “walk the plank.” For as long as ships have plied the waves, pirates have pried loose their wealth.

Shipwrecks: Far more common than sinking from a cannonade or destruction by pirates, sailing ships plunged to the bottom because of fierce winds, storms, high waves, thrusting rocks, and structural defects. According to UNESCO, an estimated three million shipwrecks are spread across the ocean floors. In the waters around Cape Cod alone, a mere fifty-mile stretch of sea swallowed more than 3,000 ships. Nature, faulty design, or sloppy navigation overwhelmed them and they capsized.

Holmes captured in his commemorative poem the heat of battles that earned the USS Constitution its praiseworthy nickname as a naval warship. Its cannon duels on the high seas were more grand than the plundering and destruction of privateers or pirates, but not all the ships of history sank as many ships as did nature. Shipwrecks were commonplace in the age of sailing.