Sailing Ships, from "Harbour at Honfleur," a painting by Georges Seurat

In 1886, Georges Seurat painted broad-beamed sailing ships docked at a pier of Honfleur Harbor. The ocean-going vessels had reached that small port on the banks of the estuary where Seine River flows into the English Channel. We can draw from this pointillist work of art several themes related to Sailing Ships. 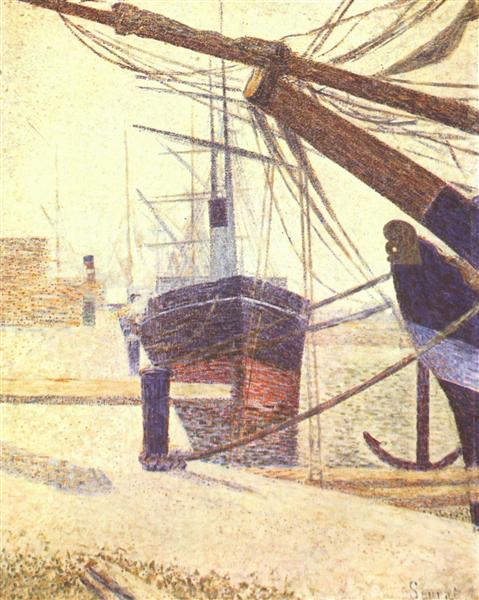 Carried Cargo: For millennia, sail-powered ships have carried goods of every imaginable kind, from tea and wool to lumber and coal, from ivory and nard to wheat and pepper. The bulk trade of the world moved with the sea winds. Silver and gold spewed back from the New World; spices (including nutmeg and cloves) arrived by the ton from the Indonesian archipelago and Indian Ocean lands. Whaling and fishing was done by stalwarts on sailing ships.

The primary ship in the painting looks to be iron-hulled, with such ships referred to as “windjammers” or “tall ships.” They represented the final evolution of sailing ships at the end of the Age of Sail. They were built to carry bulk cargo for long distances in the nineteenth and early twentieth centuries. Fortunes were made by merchants who provisioned and funded multiyear trips to the Indies or the New World, and along every other route. Wealth piled up for those who invested in profitable freight on ships.

Transported People: For millennia, sails carried people from one place to another. Think of the celebrated Kon-Tiki expedition that sought to show how people from Peru colonized the Pacific islands. Back and forth across the English Channel; crisscrossing the Mediterranean; or refugees from Europe to the New World. In the last 150 years or so, as a passenger you could splurge on First Class, travel comfortably in Second Class, or endure steerage. The term steerage came to refer to the part of a passenger ship below-decks where third-class passengers crammed in. On the tragic side, sailing ships locked below deck millions of Africans seized into slavery as they were transported across the Atlantic.

Sustained Ports: Ports were the terminus of incoming wares to fill the holds of the ships and the destination of arriving cargo to be unloaded by stevedores and transported inland. Ports built docks for sailing ships. Where large numbers of ships docked to load or unload, to be repaired and provisioned, and to give their crew shore leave – especially fleets of naval ships, districts near the docks turned seedy. Con artists and gamblers thrived. Brothels and prostitution embedded everywhere. Saloons and taverns catered to the food and alcohol cravings of seamen who had been stuck on board for months at a time. All these sleazy pastimes separated sailors from their savings, as seamen were wont to “spend like a drunken sailor.” The environs of ports settled into rough places that catered to rough men.

The placid painting by Seurat belies the power and commercial heft of its sailing ships. Their generation and their ancestors carried colossal manifests of passengers and cargo from port to port. Until steam took over, sails shouldered the world’s loads.