The four sections before this address concepts related to Sailing Ships: rebellion on a South Seas voyage, a vacation’s charter ruined, a paean to save an historic warship, and commercial sailing ships in port. Here we add subthemes that do not relate to any of the pieces of art.

Wind: Wind is to sails as water is to mills, the source of power. If a sailing ship were not becalmed, the person at the helm had to read the winds, avoid luffing the sails, keep an eye on the wind indicator and adjust accordingly. When there was no wind to fill the sails, sailors would float with the tide until the wind returned. They would “tide over.” Too much wind brought stormy danger, but the right amount from the right direction could send the properly-spread ship racing across the waves; you had “the wind in your sails.”

Technology: Sailing out of sight of land called for navigational skills and, later, tools. One of the most useful technologies for sailors would be the sextant. To find the ship’s latitude, sailors used one to measure the angle created by the noon sun, the ship, and the visible horizon. They converted that angle to degrees latitude by using charts or tables. 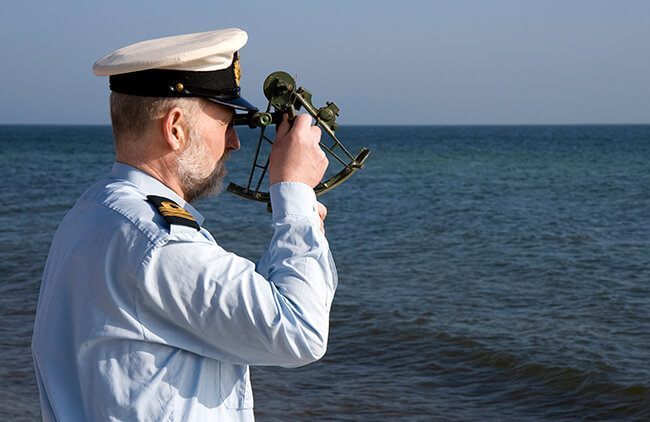 Figuring out a ship’s longitude was harder, until a device called a chronometer was invented. A chronometer could keep accurate time at sea, and by the end of the 18th century nearly every captain had one on board as an aid for finding longitude (the distance from Greenwich, England) .

A much earlier technology, a steering oar was a basic lever – typically an oversized oar or board – attached amidship on the starboard (an etymological derivation of the original ‘steerboard’) side of the vessel or at the stern. The innovation allowed a helmsman to pilot the craft more accurately. This background and the following two come from Yachting & Boating World.

A structural beam that runs from a ship’s bow to its stern and sits lower than the rest of the hull, the keel was invented by the Vikings. Because their sailing ships were square-rigged, they were prone to sliding off course when tacking close to the wind. A keel prevented this slide, increased speed, and made Viking ships more stable. The invention of the lateen or latin-rig sail, a triangular sail mounted at an angle and running in a fore-and-aft direction, permitted a maneuver called ‘tacking.’ Skillful tacking allows boats to make way to windward in a zig-zagging fashion. We might also think of lighthouses as a sailing technology. For millennia, coastal people built lighthouses so that ships could be warned about dangerous coasts or outcroppings. According to Lighthouse Directory, there are more than 18,600 lighthouses worldwide. Finally, hats off to the anonymous inventors and improvers of anchors. An anchor appears conspicuously in the Seurat painting.

Expressions: Here are 178 expressions that use sailing terms in more generalized senses. Nearly all of them came from Tall Tales but I have modified several of the definitions that blogger offered and omitted a few of his expressions. The expressions are listed in alphabetical order.