Sports, from "Racers before the Stands," a painting by Edgar Degas

Edgar Degas captured the edgy anticipation before the start of a horse race. Thoroughbreds prance and shy and jockeys maneuver before the spectators as a frisson of excitement radiates from the painting. This elegant scene evokes other thoughts about Sports. 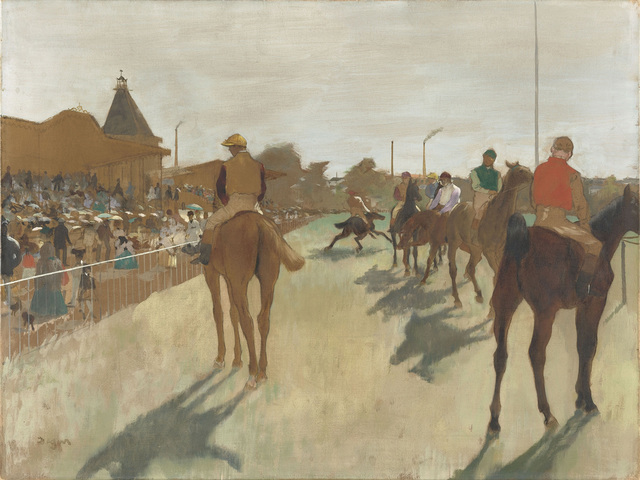 Class and Cost: With prize thoroughbreds, like those Degas painted prancing before the spectators, owners spend lavishly on the costly necessities of siring, feeding, training, transporting, and racing them. Other sports also inhale money and exhale privilege: polo matches, cigarette-boat racing, Himalayan ascents, equestrian jumping, Formula One racing, and yacht regattas all feature sticker shock. Most participants in such big-ticket sports come from the privileged classes in their countries.

Other sports cost money to enjoy, but not at the millionaire-only level: golf, skiing, rowing crew, ice hockey, sky diving, white-water kayaking, fox hunting, deep-sea fishing and gliding would be considered by most people to be expensive past-times that many can still afford. Not only are the sports themselves pricey because of equipment, but also lodging, travel, guides, and access fees drive up the cost.

If those are thousand-dollar sporting activities, hugely popular five-dollar sports thrive around the world: soccer, 5K foot races, cricket, tennis, basketball, darts, and ping-pong, to name a few, are played widely and at little cost.

Gambling: For the onlookers at the race track of Degas) as well as fans following the outcomes from elsewhere of sulky, dog, or car races, an optional thrill comes from betting on the outcome. Wagering on outcomes of sports events boasts as aged a lineage as the sports themselves. Unfortunately, whenever people gamble on athletic games, unscrupulous types will connive to manipulate the game, to cheat so that they make money. The infamous Black Sox scandal tarred baseball for years, Marlon Brando “coulda been a contenda” except as a prize fighter he took a fall (allowed himself to lose) to enrich his handlers, and Paul Newman teamed with Robert Redford to pull off an epic sting. Other varieties of cheating in sports include the steroid era of baseball, the Olympic drug scandals, sign stealing in baseball, and ball deflation in football. Wherever money changes hands based on a game, hands will tip the scales. Now, online legal betting is flush with cash and eager bettors so sports gambling will probably ramify and spread.

Fans: The left third of Degas’ painting shows bedecked onlookers under white parasols and evokes the track scene from the movie, My Fair Lady. Elegant elites attend classy events to see and be seen. Today, hundreds of millions of fans watch sporting events in person, and multiples of those numbers root for their favorite in front of a radio or television. Here are estimates from realbuzz and World Atlas about worldwide fans for various sports: football/soccer (4 billion fans), cricket (2.5 billion), field and ice hockey (2 billion), tennis (1 billion), volleyball (900 million), table tennis/ping pong (875 million), basketball (825 million), baseball (500 million), rugby (475 million), and badminton (200 million). These major sports appeal to people around the world and draw on a global talent pool. Many sports have smaller fan bases and local appeal: squash, platform tennis, pickleball, Australian footies, lacrosse, jai alai, and bocci come to mind. Many fans become rabid – they live and die by the fortunes of the team they root for.

Selective Gushers of Money: We don’t know the purses for the Degas jockeys who came first, nor what it cost the elegant onlookers to enter the stands. We can trust, however, that francs changed hands and organizers made money. A century and a half later, the global sports industry generates hundreds of billions of dollars every year. Tickets, parking fees, concession purchases, branded goods, as well as food and drink sales flow to owners. They reap billions of dollars more from TV and cable networks that pay for exclusive rights to cover major events such as the Olympics and (shall we say) sport pricey ads. But only a few, hugely popular sports share in much largess; most run on fumes and can’t generate enough financial support to sustain leagues. The Croesus money deluges the dominant sports of America (football, basketball and baseball) plus lesser amounts for international tennis, soccer and golf. To make money on lumberjack contests won’t happen, but rodeos support mini-industries.

Degas was fascinated by the energy, lines and movement of race horses. The conspicuous wealth of owners, the growing excitement from wagers laid, and the costliness of the sport are all evident from the painting.

If you are interested in other thoughts on the concept “Sports,” consider other subthemes that don’t fit as directly to the poem, painting, rock song, and movie written about in this series. For an overview, this article explains Themes from Art or click on the navigation bar, “About.”

We invite you to read about other painting discussed on this blog, and their themes. Here they are: