Bridges, from "The Bridge Over the River Kwai," a movie by David Lean

This 1957 movie centers on brutal, forced labor of U.S. and British prisoners of war by Japanese soldiers to construct a vital railroad bridge. In 1942-43, more than 65,000 Allied P.O.W.s battled torture, starvation, and disease to hack a 255-mile railway out of the harsh Thai jungle under killing conditions. The movie suggests several subthemes related to Bridges. 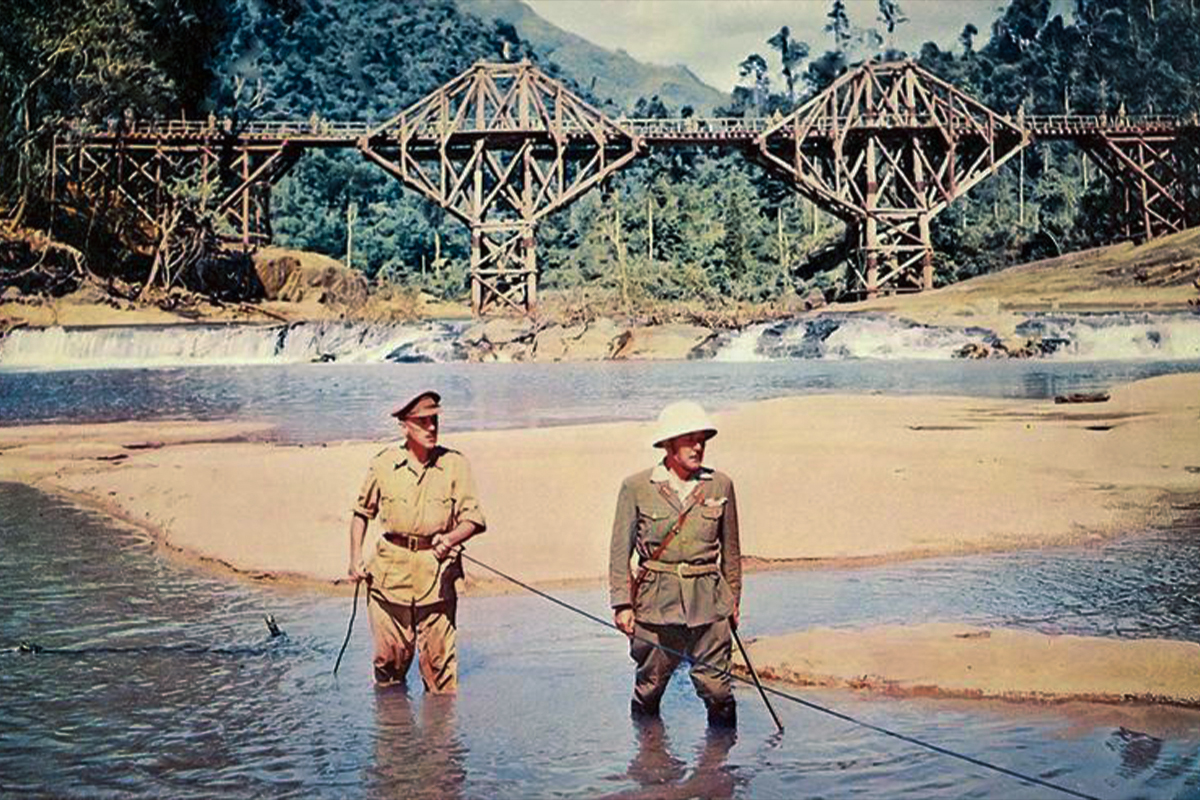 Military Significance: Armies (especially trucks, tanks and trains) need to cross rivers quickly. Thus, bridges take on immense strategic importance in a war. Often it is a race to seize a strategic bridge (as in the finale of the movie, “Saving Private Ryan”) or a race to destroy one (as nearly happened before the Battle of Remagen and the capture of the remaining Rhine bridge by the U.S. Army). Quick assembly by the Army Corps of Engineers avoids slowing forces at rivers, including with temporary pontoons if an existing bridge has suffered too much damage. Deliberate destruction of bridges in wartime happens routinely. Bridges collapse on their own, however, because of combat. One of the earliest recorded instances happened in Scotland in 1297 during the Battle of the Stirling Bridge. The stone bridge disintegrated when it was overloaded by attackers. According to History.com, the deadliest bridge collapse in war, but not by planned demolition, occurred during the Peninsular War as Napoleon’s forces attacked a Portuguese city. While battle raged on March 29, 1809, thousands of civilians fled a charge by the French back across a pontoon bridge that linked 20 boats with steel cables. The bridge collapsed, and an estimated 4,000 civilians and legionnaires drowned in the troubled waters.

Cost: Prisoners of war built the bridge in the movie, so at least the payroll cost was low. The Japanese sought no expensive extras, just a practical, rude bridge from one side of the Kwai to the other for military transport. Major bridge construction projects, however, cost governments hundreds of millions or billions of dollars. Governments fund those infrastructure investments by issuing bonds, charging tolls, drawing from general revenues, selling concessions or tapping other methods of finance. To resolve multistate or multicountry issues, bridges may require legislation and new corporate entities (like the Port Authority Trans-Hudson Corporation – PATH). Given the open spigot of spending, corruption and graft often infect honey-pot bridge projects. Staffing and annual maintenance adds to the expense. In short, a significant new bridge rarely opens on time, under budget, or without controversy.

Civilian Collapses: At the movie’s end, the Kwai bridge blows up, sabotaged by Allied commandos. In civilian life, engineering mistakes take down bridges. Complex engineering demands, mighty stresses and pressures, materials of varied composition assembled in new ways, continuous use in windy weather – no wonder bridges now and then crack and give way. The unfortunates who are trapped on the bridge and anyone unlucky enough to be below die or are injured. A notable literary example comes from “The Bridge of San Luis Rey” by Thornton Wilder. More recently, in Genoa, Italy, the 2018 collapse of a highway bridge killed 43 people. Because of a famous video, many people have watched the twisting break-up of the Tacoma Narrows Bridge in September of 1938. More collapses can be read about on the website BridgesDB.

Both sides in the movie understood the strategic value of the bridge. Unlike most projects, this one cost relatively little – except thousands of precious human lives. The explosions at the end brought down the entire edifice. Like all structures, bridges have a life span.