Bridges, from "The Railway Bridge at Argenteuil," a painting by Claude Monet

Uncharacteristically for an impressionist painting, Monet emphasized an industrial, concrete-and-metal bridge that carried trains across the Seine River. Located about eight miles outside of Paris and complete a few years before approximately 1871 when Monet painted it, it is one of seven Monet completed that included the bridge. What concepts of Bridges does the painting suggest? 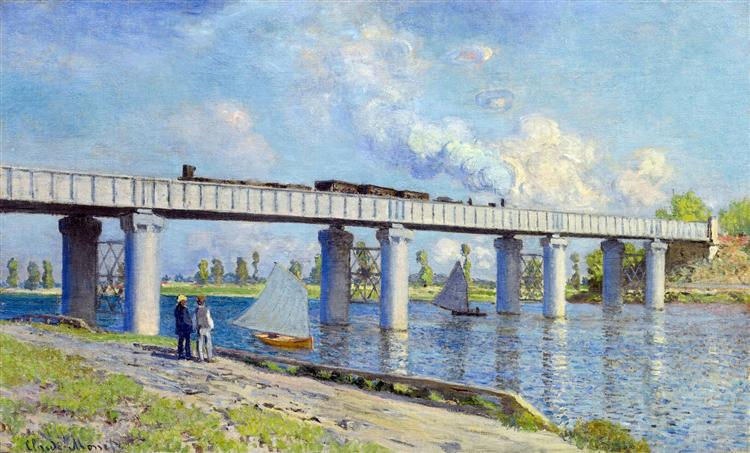 Speed and Efficiency: Before the bridge at Argenteuil opened, railway connections to nearby Paris and elsewhere were slow, at best. Other bridges might have been available, but it took time to reach them. At the time Monet painted it, the new bridge had cut shipment time for freight and passengers drastically. Compared to slowly and apprehensively fording a river that might be treacherous and troubled, relying on a ferry’s leisurely pace and limited capacity, sailing for miles and then barging down a river, or clambering with small loads over rickety footbridges, even a rude bridge noticeably boosts capacity and shortens schedules. Bridges jump the speed and efficiency of movement, whether for bikes, walkers, cars, trucks, buses, trains, or other transportation. A tunnel (such as the Channel Tunnel or those under the Hudson River) offer an alternative, albeit probably more costly to build, to a water-crossing bridge.

Traffic: This bridge went up before cars; it carried only trains on tracks. Presumably, the French government installed the railroad tracks that led to and from the bridge. For bridges that carry vehicles, roads converge on them with approach ramps and sometimes toll plazas. Hence, a major bridge serves as the focal point for a network of traffic-related construction. Millions of cars cross major bridges each year. Some bridges sprout lane markers or dividers so that during rush hour more traffic can pass in the direction of the rush. For example, a Zamboni-size machine on the Mario Cuomo Bridge (nee Tappan Zee) between New Jersey and New York moved lane markers back and forth twice a day, looking like a sinuous half of a zipper as it did so. The sole purpose of a bridge is to efficiently carry traffic.

Engineering Feat: Monet depicted a new bridge. To the eye of a non-engineer, it looks workmanlike, simple, and boring, as was the wood structure built quickly in the movie over a Thai river. By contrast, the panache of some bridges, ancient and modern, is eye-catching. The composition, construction, and required durability of large-scale bridges tax the blue-print abilities of the engineers who plan them and the contractors who build them. The bases on the ends of suspension bridges, for example, awe us with their bulk and structure, like the anchorages of the Verrazano Narrows Bridge. Engineering and aesthetics can magically combine. Here is the aptly named Dragon Bridge in Da Nang, Vietnam (from the Travel and Leisure website). 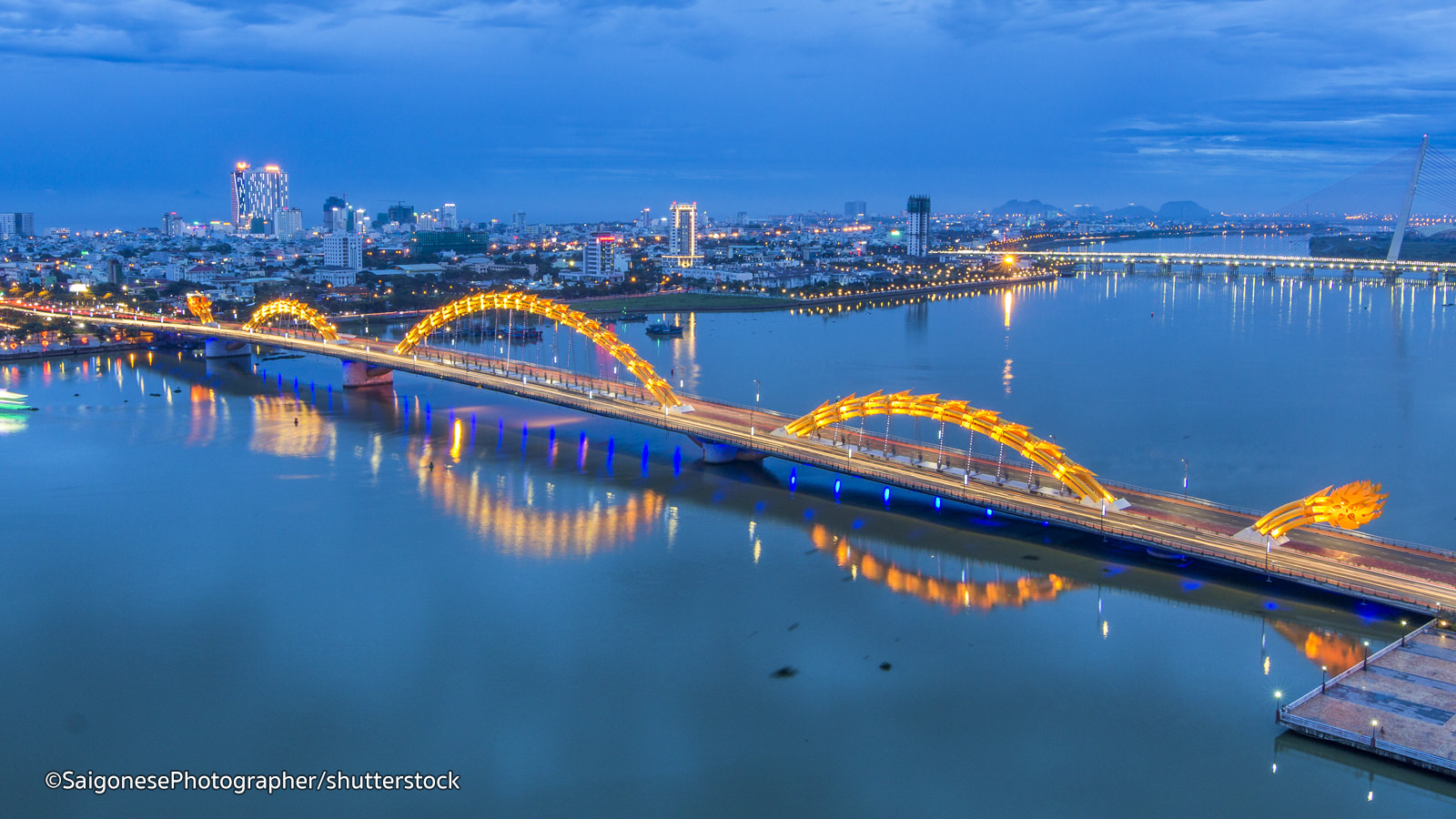 To keep up appearances and functionality, maintenance of bridges calls for constant attention and work. It is said that teams of painters never finish the Golden Gate Bridge, because when they have reached one side the far side needs painting again. Road surfaces, pylons and the cables strung from them, decorative elements, warning lights for ships and planes, fences, and much else needs to be kept in good condition. Periodically, specialists test bridges to make sure they are solid and reliable and that the engineers did their job expertly.

Monet captured the smoky passage of a train on a purpose-built bridge, the construction of which dramatically cut the transport time of goods and people. While more functional than aesthetic, this bridge has counterparts that stun observers with their engineering virtuosity.