Bridges, "The Concord Hymn," a poem by Ralph Waldo Emerson

Ralph Waldo Emerson’s poem, sung at the opening of the Battle Monument, July 4, 1837, commemorated a simple bridge in Concord, Massachusetts. Six decades before, a homespun structure stood between the muskets of the British regulars and the colonial militia and for a series of volleys became the center of action and inspiration for the colonies. The poem stimulates a few subthemes of Bridges.

By the rude bridge that arched the flood,
Their flag to April’s breeze unfurled,
Here once the embattled farmers stood
And fired the shot heard round the world.

The foe long since in silence slept;
Alike the conqueror silent sleeps;
And Time the ruined bridge has swept
Down the dark stream which seaward creeps.

On this green bank, by this soft stream,
We set today a votive stone;
That memory may their deed redeem,
When, like our sires, our sons are gone.

Spirit, that made those heroes dare
To die, and leave their children free,
Bid Time and Nature gently spare
The shaft we raise to them and thee.

Design: If we can rely on an artist’s rendering done more than two centuries later, the subsequently ruined bridge at Concord barely qualified as a bridge, certainly in comparison to today’s majestic structures. Here is the painting of the scene recreated by Domenick D’Andrea. 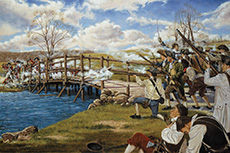 In his visualization, it was made of lumber, small and the planks were supported by wood pilings anchored in the soft stream.

The bridge was painted as a traditional, simple, beam bridge put in place to get the job done. According to the Encyclopedia Britannica, that is one of six basic bridge forms have developed: the beam, the truss, the arch, the suspension, the cantilever, and the cable-stayed. The Monet bridge would also be classified as a beam design while the Kwai River bridge was a cantilever style. Below you can see the six styles.

Other variations include pedestrian bridges, subway and monorail bridges, covered bridges, dams that might also serve as bridges (Hoover Dam being an example), pontoon bridges, and castle drawbridges. In antiquity, bridges were made of stone, slabs of rocks, tree trunks, and rope while modern counterparts include steel, concrete, asphalt, wound cables and even glass!

Dramatic Beauty: Emerson referred to the humble bridge as a rude bridge, having wooden railings and a dirt roadbed. It could handle horses and carriages, but nothing as heavy as a train. Here is a contemporaneous etching made in 1775 from the Connecticut Historical Society. 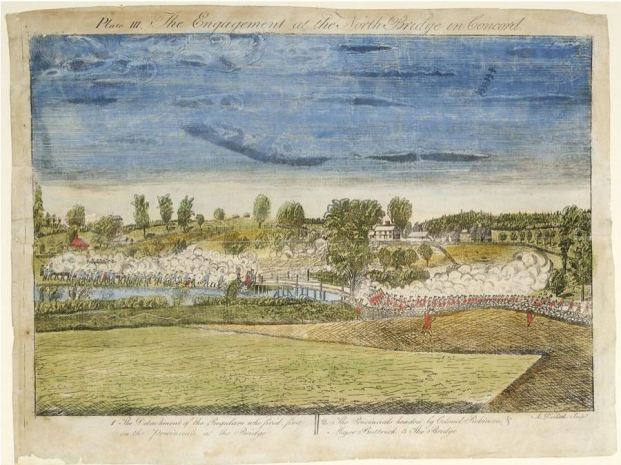 Concordians wanted no fancy, costly structure; they wanted to be able to cross the flowing water efficiently. And, click here for a reconstruction of the Old Concord Bridge.

Eye-catching aesthetics, however, distinguish many bridges. The Golden Gate Bridge, the Chesapeake Bay Bridge, or the Coronado Bridge in San Diego, these and other fetching bridges in the United States have become popular Kodak moments. They get the job done pleasingly as when you feast your eyes on the Sunshine Skyway Bridge in Tampa, Florida. Those who design large bridges seek to cost effectively as well as aesthetically accomplish their purpose.

Transition or Unifier: Although the Concord bridge stood amidst a military encounter, with enemies on both sides, the pacific symbolism of a bridge connotes a link between friendlier types. Not just a geographic suture, as Staten Island to Brooklyn with the Verrazano Narrows Bridge, or Budapest stitched together by several bridges over the Danube, but more broadly as a metaphorical unifier of likeminded folks. True, bridges knit a city together, such as the “City of Bridges,” Pittsburgh boasts 446 bridges – more than any other city in the world. Physically they unite people, and metaphorically when we “bridge our differences” we find grounds for agreement or compromise. We find a way to meet in the middle, trade off, set aside disputes and find common ground “on the bridge.”

The humble bridge that Emerson’s poem helped to make famous had no design pretensions; rough-hewn wood serviceable for modest weight, it was hardly beautiful, unlike modern bridges that aspire to combine construction quality with architectural drama and visual elegance. The firefight was a skirmish in the outbreak of war rather than unifying groups to a common goal.