Soldiers, from "The Charge of the Light Brigade," by Alfred, Lord Tennyson

Alfred, Lord Tennyson charged his poem with the chivalrous but doomed elan of a dashing mounted attack. Men galloping on horses brandished sabers against machine guns, cannon balls, barricades, and explosives sounds noble. But style falls to steel. By the end of the wild charge, of the roughly 670 Light Brigade soldiers, about 110 were killed and 160 were wounded, a 40 percent casualty rate. They also lost approximately 375 horses. Several subthemes appear from “The Charge of the Light Brigade” about Soldiers.

“Forward, the Light Brigade!”
Was there a man dismayed?
Not though the soldier knew
Someone had blundered.
Theirs not to make reply,
Theirs not to reason why,
Theirs but to do and die.
Into the valley of Death
Rode the six hundred.

Flashed all their sabres bare,
Flashed as they turned in air
Sabring the gunners there,
Charging an army, while
All the world wondered.
Plunged in the battery-smoke
Right through the line they broke;
Cossack and Russian
Reeled from the sabre stroke
Shattered and sundered.
Then they rode back, but not
Not the six hundred. 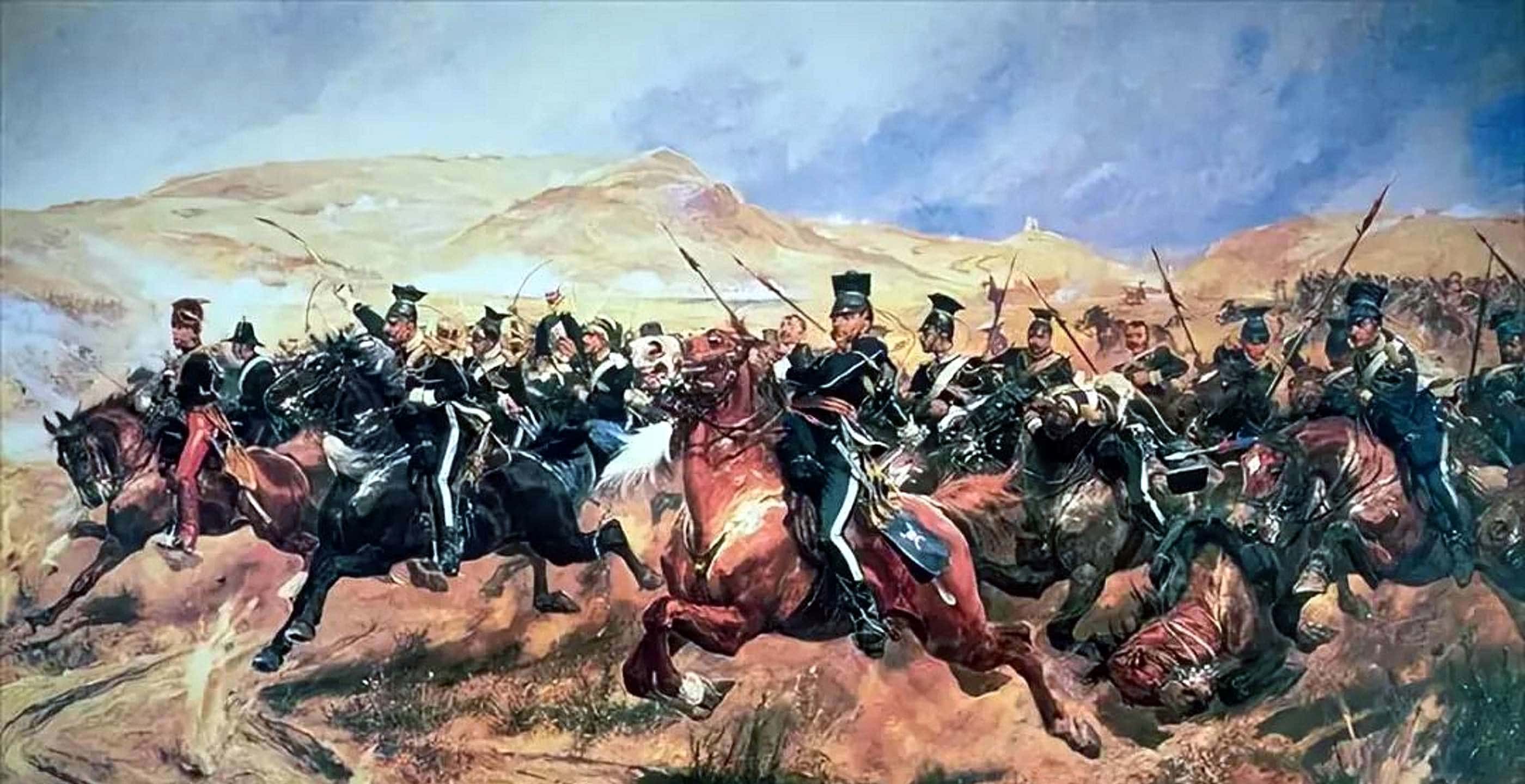 Courage: Soldiers die. They know they may someday stand in harm’s way, and they may worry about how they will hold up. The cavalry galloping into the cannons knew that they were riding with death, but discipline and memorable bravery sustained them. Death’s cold breath calls for courage, most acutely when your enemy faces you directly in the valley of death, trying to kill you by hand or gun. The fortitude to keep fighting when bullets and artillery whistle by distinguishes individual soldiers as well as groups of comrades.

Boldly they rode and well,
Into the jaws of Death,
Into the mouth of hell.

Stephen Crane’s “The Red Badge of Courage”" brings you to sense the fear-inspiring roar of battle and imminent death, and how men fare. Courage is when you trundle toward Omaha Beach as the machine guns rattle against your transport, but you and your fellow soldiers hold firm. Injured soldiers who keep on shooting exhibit another form of courage as in the movie, “Lone Survivor.”

The opposite of courage is cowardice, failing to do what a soldier is trained to do despite bullets zinging and shells exploding. At the end of the movie, Saving Private Ryan, the ammo carrier quivers and fails the test of his personal bravery. Going Absent without Leave (AWOL) can be desertion, punishable by death. Treason falls into a similar deep circle of hell.

Slaughter and Maiming: Glamour and chivalry be damned; the 600 valorous men suffered 40 percent casualties. General William T. Sherman knew: “It is only those who have neither fired a shot nor heard the shrieks and groans of the wounded who cry aloud for blood, more vengeance, more desolation. War is hell.” Instant death, lingering death, grievous wounds or a bite in the buttocks – armed combat takes a hellish toll. As an example, Wikipedia explains that during the butchery between Iraq and Iran, an estimated 500,000 men were slaughtered and many more were wounded. For Americans, the Battle of Antietam in the Civil War stands as its bloodiest single day; 23,000 men were killed or wounded.

For the soldiers who emerge from battle or extended time on the front lines, the psychological and emotional cost can be debilitating. PTSD (Post Traumatic Stress Disorder, once called shell shock) plagues many combat veterans who return to civilian life. An early scene of the movie “The Lucky One”" conveys the distress of a marine back from the traumas of Iraq whose nerves are shot. In World War II, General George Patton slapped two distraught and disoriented GIs, which made headlines and cost Patton his command.

Authority and Officers: Instruction drills soldiers to follow the commands of their officers. The sword rises and you fire. Without immediate obedience to a direction from your squad or platoon leader, no unit under fire can hope to prevail. Tennyson memorably conveys that level of unquestioning compliance, even when it was possibly sensed that someone had blundered:

This consequence of military leadership, that the troops do what chain of command orders, may lead to disasters like the ill-fated charge during the Battle of Balaclava. Still, experience has taught that a clearly-directed and responsive fighting force lands the most punches.

Reading this poem, we sense the terror of charging into a hail of steel, yet spurring your horse on because you were ordered to do so and you are a brave comrade. You follow orders, possibly to death, because your commanders have decided what must be done.