Clothes, from "My Fair Lady," a movie starring Audrey Hepburn

“My Fair Lady,” a blockbuster starring Audrey Hepburn (Eliza Dolittle) and Rex Harrison (Prof. Henry Higgins), won eight Academy Awards, including Best Picture, Best Actor, and Best Director. Toward the end of the movie, in the scene shown below, the uneducated waif in rags has transformed into a regal beauty in a stunning gown, replete with long white gloves, a tiara, slippers and jewels. The sartorial do-over symbolizes the entire project of Prof. Higgins. It also suggests more subthemes of Clothes. 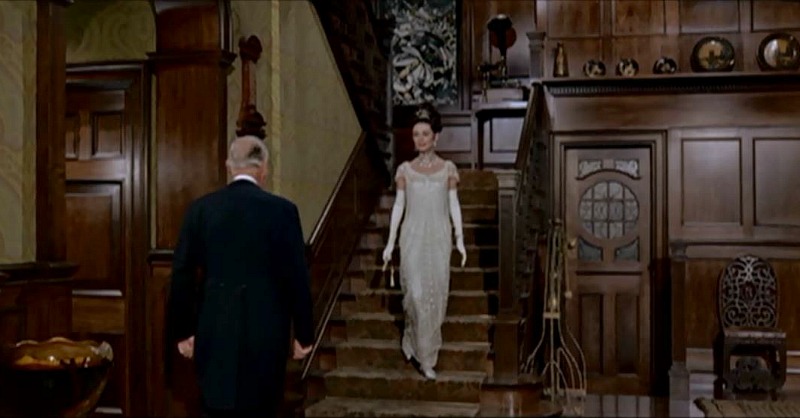 from Hooked on Houses

Socioeconomic Class: Audrey Hepburn takes your breath away as she descends, as you recognize she has blossomed into her new self. The first impression everyone conveys to others includes, importantly, what they are wearing and how they wear it. Indeed, clothes make the man and the woman. From top to bottom what you have on immediately pegs your income (do you shop in posh Knightsbridge), your background, education, nationality, personality, sense of style, and more to an astute observer. Sherlock Holmes was not the only one to “read” boots, hats, and coats. The preppie look, the old wealth look, the struggling artist, the dowager, and a myriad more stations in life are manifest from one’s outer garments. Consider how quickly we assume someone’s origins based on a beret, dashiki, burqa, fez, lederhosen or sari. Your threads weave the thread of your life. Both accents and attire out us.

Just as the look of cars and kitchens identify the decade of their popularity, so too clothing marks a period. According to Wikipedia, “Ponchos, moccasins, love beads, peace signs, medallion necklaces, chain belts, polka dot-printed fabrics, and long, puffed “bubble” sleeves were popular fashions in the late 1960s. Both men and women wore frayed bell-bottomed jeans, tie-dyed shirts, work shirts, Jesus sandals, and headbands.” You recognize the “hippie” look instantly, just as you recognize a ghetto look, a Western cowboy, a preppie, or the garb of film noir. What you wear is when you are.

Budgets and Spending: The average U.S. household spends around 3.8% of its income on clothing, according to CreditDonkey. Many items cost close to nothing, such as no-name socks or underwear. Clothing has dropped in inflation-adjusted dollars over the past decades because of automation and the migration of manufacturing to low-cost countries. The American Enterprise Institute points out that “clothing that would have cost \$100 in 1993 would today cost only \$59.10 in constant dollars.” Other items, including silk from luxury fashion companies such as Gucci, Chanel, Dior and Hermès can range into the tens of thousands of dollars.

The Nightingale of Kuala Lumpur is the most expensive dress in the world. It was designed in 2009 with a price tag of $30 million (plus sales tax). Created by the Malaysian designer Abdullah Faiyzali, the reddish evening dress combines silk, chiffon, taffeta, satin, Swarovski crystals, 751 diamonds, and a 70-carat teardrop diamond, according to The Wealth Circle.

Costumes and Disguises: A reader can imagine Herrick and Julia about to depart to a high-society costume ball. A mere face mask might have sufficed, and beneath it her gorgeous silk attire would have gleamed and glittered. Such costumes were amusing pretend, as was Romeo supposedly concealed by a mask when he crashed the Capulet ball. Sometimes disguises are in dead earnest, however, such as for those in a witness protection program or the KKK. These days, costumes are mostly tricks for kids. Halloween parties give everyone an opportunity to choose a famous figure to imitate or to sport another costume. Mostly, however, works of art or entertainment dream up disguises of varying plausibility. They enable the plot in movies (think of Kim Novack in the last part of Vertigo), crop up in operas (Leporello as Don Giovanni or Leonore, disguised as a prison guard named “Fidelio”), or help in plays (Rosalind turned into Ganymede in As You Like It; Portia appearing as an erudite lawyer). On television, Clark Kent changes clothes in a telephone booth, Bruce Wayne saves Gotham concealed as Batman, and the Lone Ranger rides with a black mask.

When Eliza Dolittle descends the stairs as an elegant, impeccably dressed woman of society, the impression is marvelous. Her gorgeous clothes proclaim her social status, command of the norms of the day, bulging bank account, and perfect counterfeit disguise.

If you are interested in further thoughts on the concept “Clothes,” consider other subthemes that don’t fit as directly to the poem, painting, rock song, and movie written about in this series. For an overview, this article explains Themes from Art or click on the navigation bar, “About.”