Dancing, from "Dance at Bougival," a painting by Pierre-August Renoir

Renoir’s canvas, Dance at Bougival, glows with a young couple in the close embrace of a slow dance. Behind them, others at the outdoor event in that small French city are watching, talking and socializing while the two lovers are caught up in the intimacy of the music and the tender moment. What are other themes of Dancing we can pick out from this painting? 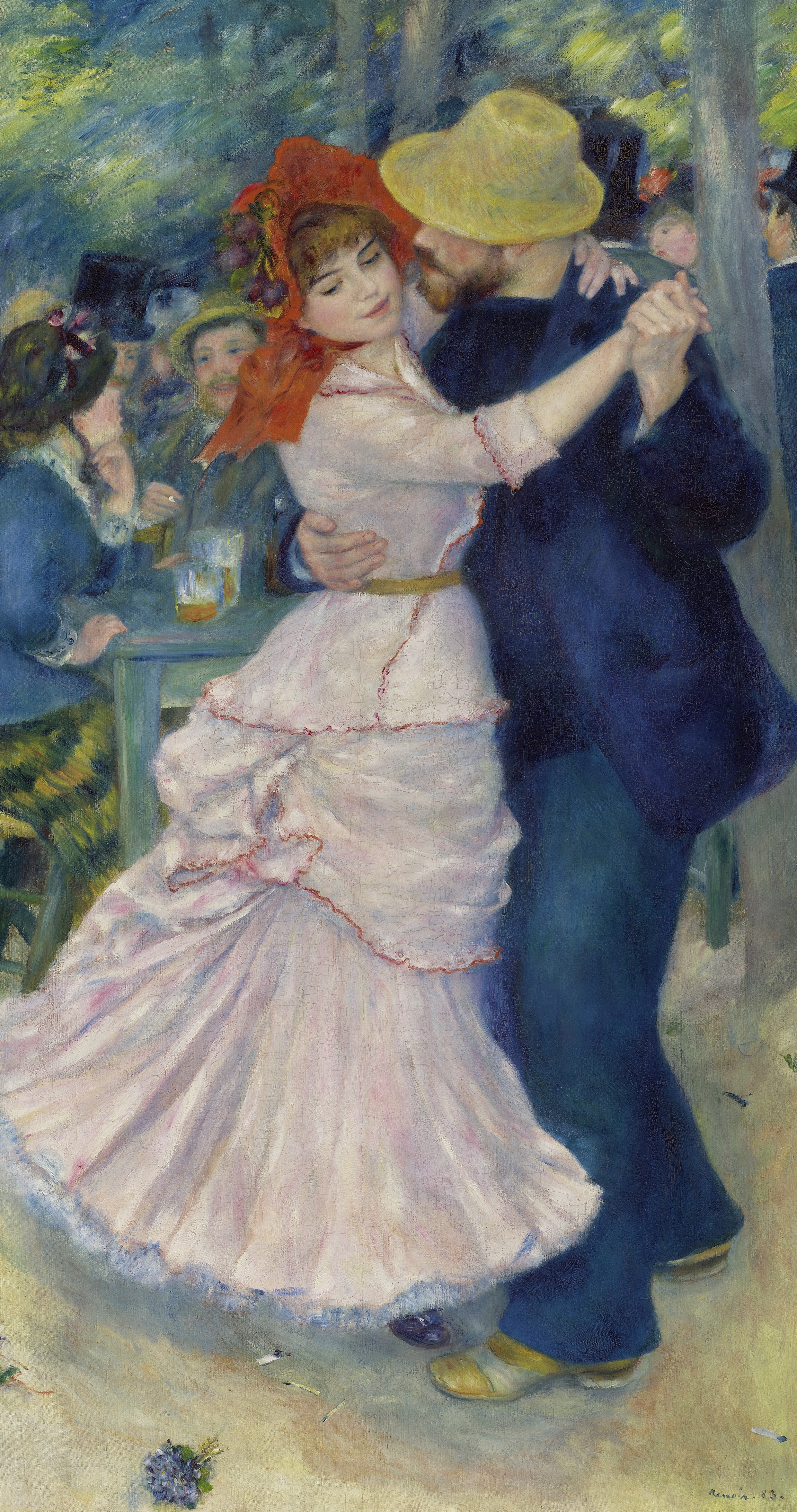 Dance at Bougival in the Museum of Fine Arts, Boston, MA.

Norms and Styles: We can only conjecture what moves these two young people are dancing around the floor (from their frame and arms, it is not a waltz). Perhaps they are simply swaying and turning in a free-form style. If they were au courant, they would have been stepping out to the latest favorite. At the time of this painting (1883), Europe favored waltzes, polkas, mazurkas, and a few other dances. But every decade, country, and social strata favors a few dance steps. New dances become popular, older dances fade away. And all dances evolve.

Types of dances not mentioned elsewhere under this theme include tango, salsa, samba, breakdance (a type of dance with acrobatic moves done to hip-hop music), ice dancing, Irish dance, and folk dance. To bring the point home on the staggering variety of this entertaining activity, the International Encyclopedia of Dance covers six volumes and 4,048 pages. Dress: Certainly the young woman, the Dancing Queen of this painting, is very proud of her fancy dress. When people trip the light fantastic on Friday or Saturday night, they choose outfits that fit in with the place, their fellow partyers, and their personality. For high school proms, tuxedos and boutonnieres rule for the boys and classy gowns and fancy heels are de rigueur for their dates. Ballroom dancers put on special shoes to protect varnished floors and let them slide their feet, swishing large skirts show up in country-style dances, while disco balls blinked down on big shoes, bell bottoms, chest hair, and sparkles galore or for women, tie-dyed shirts, a peasant blouse or skirt, or a halter-top. Of course, dancers who anticipate rain on their street customarily bring umbrellas. Much of the allure and attraction of social dancing is how the dancers dress. It’s a stage on which they can show off, preen, indulge in vanity – to match the excitement of the moment, the music, and the hope for romance.

Associations with Nations: In France, during the centuries before Renior memorialized this scene, people enjoyed dances that now only historians would recognize: branle, menuet, musette, pavane (as in Ravel’s, Pavane for a Dead Princess), forlane, galliard, and saltarello count among the extinct steps. Meanwhile, a medley of dances have come to be associated with a particular country. For example, Kathak as Indian, Yangko as Chinese, squat dances for Russia, the waltz in Germany or Austria, tango from steamy Argentina, an array of square dances in the United States, Morris Dances represent England, Gangnam style speaks of South Korea, or the Flamenco reminds us of Spain. Styles of dance around the world have evolved to express the histories and social sensibilities.

This vertical impressionist painting brings us into the courtship of a French couple. They are slow dancing, holding each other closely, oblivious to the spectators around them, and enjoying affectionate romance. Their step was undoubtedly local and familiar (if not ad hoc hugging and gliding to the music), and likewise what they were wearing was in line with the times. To the experienced eye, the combination of moves and clothes marks them as late 19th century French.

If you are interested in further thoughts on the concept “Dancing,” consider other subthemes that don’t fit as directly to the poem, painting, rock song, and movie written about in this series. For an overview, this article explains Themes from Art or click on the navigation bar, “About.”