Sleep, from "The Second Coming," a poem by William Butler Yeats

William Butler Yeats’s poem, The Second Coming, broods over the parlous state of the world in 1919, traumatized after the carnage of World War I. Its second stanza envisions a nightmarish shape awakened from sleep, who will slouch toward civilization. Other themes that touch on unpleasant aspects of sleep arise.

Turning and turning in the widening gyre
The falcon cannot hear the falconer;
Things fall apart; the centre cannot hold;
Mere anarchy is loosed upon the world,
The blood-dimmed tide is loosed, and everywhere
The ceremony of innocence is drowned;
The best lack all conviction, while the worst
Are full of passionate intensity.

Surely some revelation is at hand;
Surely the Second Coming is at hand.
The Second Coming! Hardly are those words out
When a vast image out of Spiritus Mundi
Troubles my sight: somewhere in sands of the desert
A shape with lion body and the head of a man,
A gaze blank and pitiless as the sun,
Is moving its slow thighs, while all about it
Reel shadows of the indignant desert birds.
The darkness drops again; but now I know
That twenty centuries of stony sleep
Were vexed to nightmare by a rocking cradle,
And what rough beast, its hour come round at last,
Slouches towards Bethlehem to be born?

Nightmares: At different intervals of rapid eye movement (REM) during our sleep, we dream. Yeats’s apocalyptic image was like a bad dream, a nightmare. Children who are frightened by lurking lions, victims of post-traumatic stress disorder, and any of us with a vivid imagination that turns terrifying may revisit the trauma in a dream and jolt awake sweating, frightened, and unable to sleep. A recurring nightmare may even trouble our sleep in a nap or night after night.

Mostly, however, our dreams please and fascinate us, but they also puzzle us. Despite thousands of years of people trying to interpret dreams, including Joseph interpreting the dreams of Pharaoh and Sigmund Freud deciphering symbols of rivalry and need, how dreams come about and whether they have meaning remains mysterious. While some people barely remember fragments of a single dream, others recall in vivid detail long and complicated dreams (regrettably at times, many insist on sharing those nighttime reveries). People even talk in their sleep and move around in connection with their mental cinematics.

Deprivation: One cruel technique of enhanced interrogation, a.k.a. torture, deprives captives of sleep. Loud noises, electric shocks, or other alarms prevent the prisoner from sleeping sufficiently until they become confused and broken. That infliction is terrible, but missing enough sleep afflicts many people. Having just given birth, mothers find their sleep robbed by their infant’s cries and need for suckling. Sustained sleep deprivation contributes to postpartum depression. Pressure from workload, including schoolwork, business dealings or courtship across time zones can cut into sleep. Illness or pain keep us up. Alarm clocks brusquely shorten the slumber we crave. The range of ill-effects from lack of sleep keep somnologists busy.

Snoring: As long as we are plunged into the bad sides of sleep (nightmares and deprivation), let’s follow the anxiety and depression of Yeats one more step. Snoring afflicts many Americans but bedevils their bedmates. It can be heard during all stages of sleep according to Goodsomnia. Snoring happens when you can’t move air freely through your nose and throat during sleep. This makes the surrounding tissues vibrate, which produces snores. People who snore often have too much throat and nasal tissue or “floppy” tissue that is more prone to vibrate. 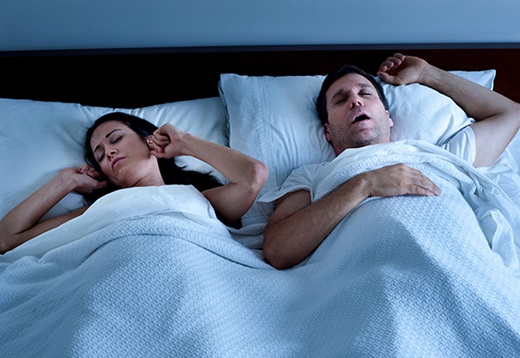 An estimated 45 percent of adults snore occasionally, while 25 percent snore regularly—often disturbing their bed partner’s slumber and possibly their own, too. You’re more likely to snore if you’re overweight, a middle-aged or older man, or a postmenopausal woman. The picture and text following have been modified from the Hopkins Medicine site.

The rasping, raucous sound of a person who snores loudly can drive you crazy. A pillow over your head or earplugs can muffle the obnoxious noise but once you are aware of the rhythmic gurgle, rest is lost. Perhaps nudging the person who is breathing stertoriously will break their pattern and various devices claim to moderate the monotonous drones.

The nightmarish vision of The Second Coming symbolizes Yeats’s fear that horrors have been awakened that it will drag further down a world already reeling from a catastrophic war. Nightmares are not the only ugliness of sleep; if you can’t get enough sleep or if snoring disturbs you, the desired and necessary balm of bed disappears.

If you are interested in further thoughts on the concept Sleeping, consider other subthemes that don’t fit as directly to the poem, painting, rock song, and movie written about in this series. For an overview, this article explains Themes from Art or click on the navigation bar, About.