Sleep, from "The Siesta," a painting by Vincent Van Gogh

“Siesta” [La Meridienne], a bucolic canvas by Vincent van Gogh, reveals a pair of farmers languidly napping in the heat of the day beneath a shady hay mow. They are resting as they digest their meal, avoid the intense sun, and build energy to keep harvesting. Their brief sleep enables them to keep working, and elicits other subthemes of Sleep. 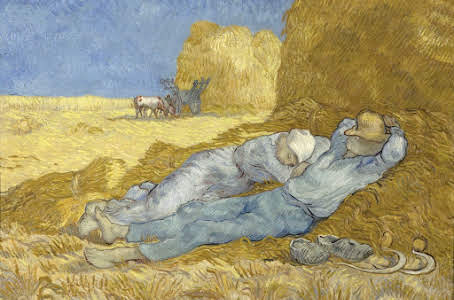 Rest: All mammals sleep. During those daily periods of rest, the body and brain carry out all kinds of necessary maintenance functions. As explained by HealthLine regarding humans, “In stages 3 and 4, deep sleep begins. Your eyes and muscles don’t move, and your brain waves slow down even further. Deep sleep is restorative. Your body replenishes its energy and repairs cells, tissues, and muscles.” Shakespeare phrased it more poetically in “Macbeth”:

The HealthLine site adds that “When you sleep, your brain’s glymphatic (waste clearance) system clears out waste from the central nervous system. … Research suggests that sleep contributes to memory function by converting short-term memories into long-term memories, as well as by erasing, or forgetting, unneeded information that might otherwise clutter the nervous system.” More on the therapeutic side of sleep can be found at an Australian health site.

Naps: Hot countries have developed a pattern, for those who can indulge, of siesta time during the heat of the day. That rest period in the early afternoon allows nappers to absorb lunch, typically their big meal of the day, and avoid the sweltering heat. It was societally sanctioned down time. Where air-conditioning and offices have taken over, however, the quaint and amiable custom has disappeared. Now, executives and others grab power naps or cat naps (maybe like those of lions); they put their head down and sleep for 20-30 minutes. The length of the nap and the type of sleep help determine the brain-boosting benefits. A power nap – sometimes called the stage 2 nap – is good for alertness and learning motor learning like typing and playing the piano.

What happens if you nap for more than 20 minutes? Longer naps help boost memory and enhance creativity. Slow-wave sleep – napping for approximately 30 to 60 minutes – is good for decision-making skills, such as memorizing vocabulary or recalling directions. Getting rapid eye movement or REM sleep requires an hour or longer nap, but plays a key role in making new connections in the brain and solving creative problems.

Plenty of us may feel tired, but can’t doze off and awaken alertly shortly thereafter. Others take so long to revive after a nap that it’s not worth it. Also, if you nap too long, you might throw off your usual bed time.

Beds, Sheets and Pillows: For millennia, people slept on straw, blankets, rugs or anything that would soften the hard ground (rough beasts sleep on the sand) . Now, in the Western world, beds typically consist of a mattress on springs. From singles to doubles, Queen Size to King Size beds vary in width, length, and firmness. We sometimes rest on vibrating beds, water beds, or heart-shaped beds. Hammocks make do for the crew of ships, sleeper berths on trains, divans and sleeping couches in homes, Murphy beds and pullout beds, and bunkbeds in dorms and children’s rooms – the selection is enormous.

On top of the mattress may lie a bed pad, with sheets tucked in on top of them. Over everything, blankets (sometimes electric) and perhaps coverlets or quilts complete the bed parfait. Pillows under the head have also proliferated in styles and manufacture. Eye shades and ear plugs ward off light and sound. All these accessories to sleep, not to mention bed stands, have elaborated steadily as incomes have risen. Even so, the homeless make do with cardboard and rags.

Two weary farmhands take time off to snooze on hay. They are doing what billions of people have done; they are napping to rest their bodies and restore their strength. The straw is hardly a sumptuous, fluffy bed, but it suffices.

If you are interested in further thoughts on the concept Sleeping, consider other subthemes that don’t fit as directly to the poem, painting, rock song, and movie written about in this series. For an overview, this article explains Themes from Art or click on the navigation bar, About.