Rivers, from "Kubla Khan," a poem by Samuel Taylor Coleridge

Supposedly while under the influence of laudanum, Samuel Taylor Coleridge dreamed about a lengthy, but upon recovering could only recall the 54 lines of his famous poem, Kubla Khan. It begins with a river, a river invested with portentous power and divine significance. We can draw out various sub-themes of River.

In Xanadu did Kubla Khan
A stately pleasure-dome decree:
Where Alph, the sacred river, ran
Through caverns measureless to man
Down to a sunless sea.
So twice five miles of fertile ground
With walls and towers were girdled round;
And there were gardens bright with sinuous rills,
Where blossomed many an incense-bearing tree;
And here were forests ancient as the hills,
Enfolding sunny spots of greenery.

But oh! that deep romantic chasm which slanted
Down the green hill athwart a cedarn cover!
A savage place! as holy and enchanted
As e’er beneath a waning moon was haunted
By woman wailing for her demon-lover!
And from this chasm, with ceaseless turmoil seething,
As if this earth in fast thick pants were breathing,
A mighty fountain momently was forced:
Amid whose swift half-intermitted burst
Huge fragments vaulted like rebounding hail,
Or chaffy grain beneath the thresher’s flail:
And mid these dancing rocks at once and ever
It flung up momently the sacred river.
Five miles meandering with a mazy motion
Through wood and dale the sacred river ran,
Then reached the caverns measureless to man, And sank in tumult to a lifeless ocean; And ’mid this tumult Kubla heard from far
Ancestral voices prophesying war!
The shadow of the dome of pleasure
Floated midway on the waves;
Where was heard the mingled measure
From the fountain and the caves.
It was a miracle of rare device,
A sunny pleasure-dome with caves of ice!

A damsel with a dulcimer
In a vision once I saw:
It was an Abyssinian maid
It was an Abyssinian maid
And on her dulcimer she played,
Singing of Mount Abora.
Could I revive within me
Her symphony and song,
To such a deep delight ’twould win me,
That with music loud and long,
I would build that dome in air,
That sunny dome! those caves of ice!
And all who heard should see them there,
And all should cry, Beware! Beware!
His flashing eyes, his floating hair!
Weave a circle round him thrice,
And close your eyes with holy dread
For he on honey-dew hath fed,
And drunk the milk of Paradise.

Mythology and Religion: Throughout the poem, the sacred river Alph mysteriously pours along, a blur of truth and myth. Perhaps the best-known example of a river in mythology is the Styx where Charon ferried the dead from Earth (Gaia) to the Underworld (Hades). The mother of Achilles dipped him in it to render him invulnerable, except where she held him. Geographically, the Underworld was believed to be surrounded by five rivers: the Acheron (river of woe), the Cocytus (river of lamentation), the Phlegethon (river of fire), the Styx, and the Lethe (river of forgetfulness). Not only were rivers worshiped, but the Greeks recognized river gods, the Potamoi. Thus, if you combine hippo meaning horse (as in (hippodrome, hippocampus) and potamus (as in the river gods) you get hippopotamus.

Further East, the Ganges River is sacred to Hindus. It is believed to personify the Goddess Ganga. Hindu belief holds that bathing in the Ganges on certain occasions causes the forgiveness of transgressions and helps attain salvation. One stretch of the Ganges and the holy places that line it is shown below. 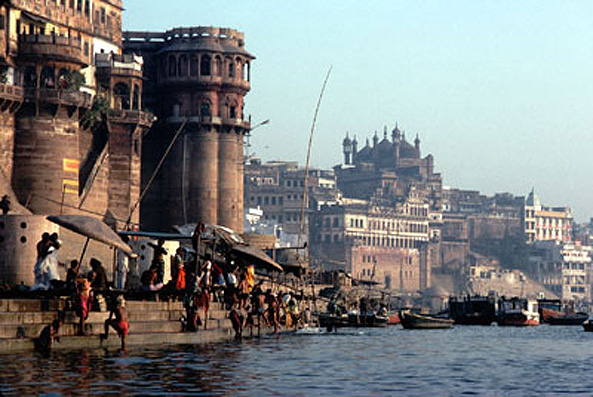 Government Regulation: Kublai was the fifth khagan-emperor of the Mongol Empire, reigning from 1260 to 1294. Coleridge imagined a variant of his name for them poem. The Kubla Khan of poetic fame was a government of one, and he oversaw the mighty river’s course.

Likewise, other governments regulate riverways. So crucial are they, for irrigation and for power among other benefits, that cities specify embankments and other construction, as in Paris or ferries in Liverpool. National governments regulate to widely varying degrees how those invaluable resources should be managed. They do not leave it to chance or local governments. For example, the Colorado River is overseen by the Upper Colorado River Authority and the Lower Colorado River Authority. New York and New Jersey coordinate regarding the Hudson River through the Port Authority. At the international level, countries have struggled to agree to equitable arrangements for exploiting and protecting rivers. The Zambezi River Authority is a corporation jointly and equally owned by the governments of Zambia and Zimbabwe. As the world heats and dries, conflict over water to drink and water to drive turbines will become worsen.

Battles: Fortifications bestrode rivers, such as St. Angelo in Rome or the walls girdling Kubla Khan’s city. As long as we are on military leaders, we should note history-changing battles around rivers. According to World History, the Battle of Issus, on Nov. 5, 333 BCE, was Alexander the Great’s first direct engagement with King Darius III, in southern modern-day Turkey across the River Penarus. It was a major victory for Alexander, defeating the Achaemenid Empire and causing Darius III to flee the battlefield. A millennium later, the Battle of the Vorskla River looms large in the medieval history of Eastern Europe. It was fought on August 12, 1399, between the Tatars and the armies of Tokhtamysh and Grand Duke Vytautas of Lithuania. The battle ended in a decisive Tatar victory. Washington and his soldiers famously crossed the Delaware River to attack the Hessian soldiers of Trenton on Christmas Day. One hundred fifty years later, during World War I, the bloody battles of the Somme and the Marne took their name from the nearby river. Part of what protected Stalingrad in World War II from the invading Germans was the mighty Volga River.

Hydroelectric Power: Rushing, gushing water such as the sacred river Alph has muscles! Starting with the very earliest waterwheels, people harnessed the strength of river water. The water mill, for example, is said to have originated in the 3rd century BCE in the Greek province of Byzantium. Designs improved over time so that flowing water spun a large waterwheel. A shaft connected to the wheel axle transmitted the power from the water through a system of gears and cogs to machinery, such as a millstone to grind grains or corn.

Water wheels were obsoleted by electric power. Hoover Dam, with its massive electricity production powered by the flow of water out of Lake Mead, stands tall in that regard. In 2020, total U.S. conventional hydroelectricity generation was about 291 billion kilowatt-hours, equal to about 7.3% of total U.S. utility-scale electricity generation. Both China and Brazil produce more hydroelectricity than the U.S. Wikipedia and PBS inform us that the United States has more than three million miles of rivers and streams, and on them are approximately 84,000 dams, of which 8,100 are classified as “major dams.” Only a portion of those dams convert river flow to electricity.

The fantastical Kubla Khan begins with a mighty, revered river running through the city of the Mongol leader. The opposite of a tranquil fishing stream, its wild robustness resembles the awesome Khan’s military prowess.

If you are interested in further thoughts on the concept Rivers, consider other subthemes that don’t fit as directly to the poem, painting, rock song, and movie written about in this series. For an overview, this article explains Themes from Art or click on the navigation bar, About.