Rivers, from "The Seine and the Louvre," a painting by Camille Pissarro

Camille Pissarro painted the Seine River in Paris as it languidly passed before the Louvre. We see levees, barges, bridges, and piers among the accessories of that famous river. Several aspects of Rivers as a theme emerges from this impressionist work of art. 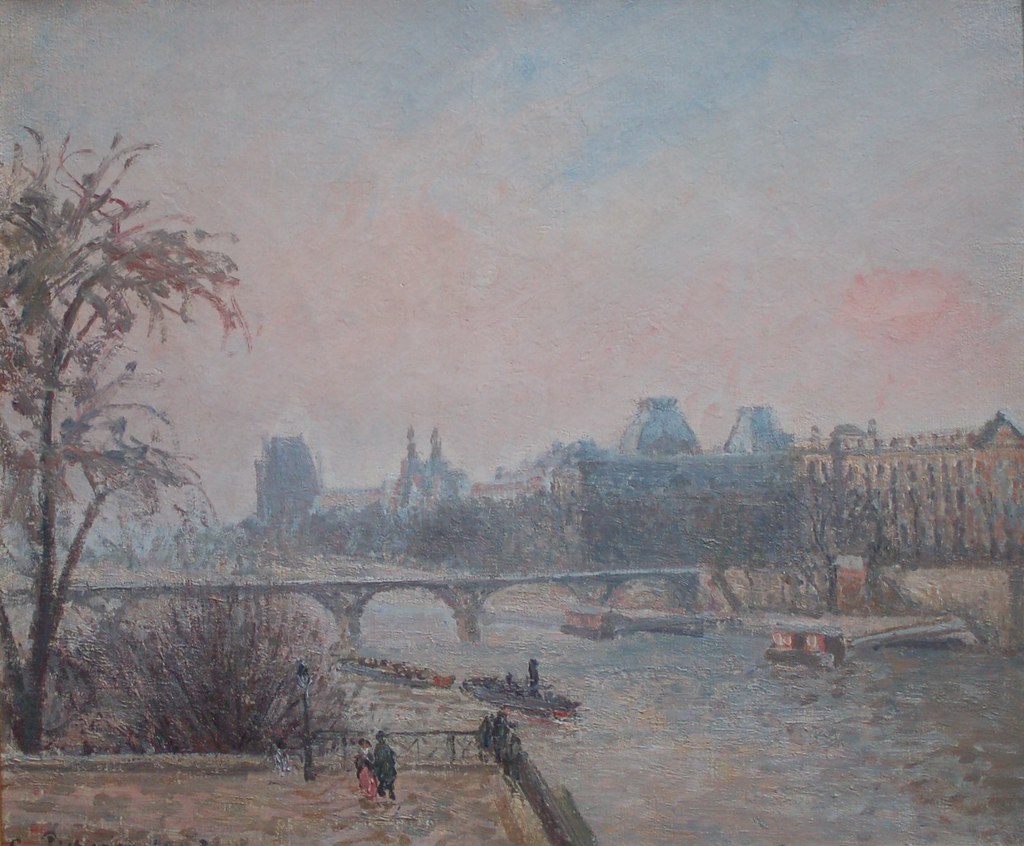 Transportation: Before railroad trains crisscrossed the land, bulk materials traveled long distances mostly by canal or river barge. Floating hods of coal, timber, and other heavy loads wended their way along the Mississippi, the Ohio, the Susquehanna, and many other arteries. Where lakes formed from rivers, they supplemented the trans-shipment network. As towns sprouted along the banks of rivers, ships docked as they passed back and forth to ports and were loaded onto or from the waiting ocean-crossing ships. For example, the Willamette River in Oregon supports Portland and a string of cities on its way to the Pacific. Passengers and commerce travelled on ferries or riverboats. Particularly in the 19th century river-borne cargo dominated, but even in recent years “Domestic waterborne shipping in the United States move[d] 14% of the national cargo tonnage … [and] provide[d] an estimated 124,000 direct jobs.” Homeland Security Digital Library

Floods: The stone embankments that can be seen on either side of the Seine help contain the river if heavy rains raise it. River-dwellers build dikes and runoff areas, they planted vegetation and redirected storm sewers, they stacked sandbags and built on stilts, but if the heavens open, a river can still drown land and destroy buildings. In the developed world, wide rivers now flow more docilely as they are tamed by these precautions as well as by dams and floodplains designed to alleviate excessive buildup of water. During an inundation, drownings happen. Between 500,000 and 800,000 people perished in China’s 1938 Yellow River catastrophe. In the days after, flood waters may spread dreadful diseases such as cholera and dysentery. Outdoor sanitation facilities share their diseases through the receding water, and whoever drinks that water may sicken unto death.

Entertainment and Sports: Rivers enable many kinds of pleasures. As can be seen in the lower left of Pissarro’s painting, people enjoy walking beside rivers and watching both the bustle, drama, and placidity. Many cities have created esplanades and parks alongside their rivers. Restaurants and bars alcohol perch next to rivers, such as the River Café in Brooklyn, so that patrons in fancy clothes can dine and dance against the backdrop of river. A range of sports can take place on a river, such as jet skiing, waterskiing, triathloning, and fishing. Other people choose to kayak and canoe or simply to sunbathe by them. If the river stretches broad enough, and wind comes, sailors love it. In addition, rivers give pleasure when Macy’s launches fireworks on the Hudson or ballparks nestle next to rivers, as in Pittsburgh and Cincinnati.

This calm and somber painting features the Seine River flowing through the heart of Paris. The viewer can pick out many characteristics of a river: a vital artery of transport, a tame creature that can still rise up with destruction, and forms of pleasure it sustains.

If you are interested in further thoughts on the concept Rivers, consider other subthemes that don’t fit as directly to the poem, painting, rock song, and movie written about in this series. For an overview, this article explains Themes from Art or click on the navigation bar, About.