Money, from "The Pork Butcher," a painting by Camille Pissarro

We see in The Pork Butcher, a slice-of-life painting by Camille Pissarro, a crowded produce market in late 19th century France. Shoppers study the tables of meat and decide whether and how much to buy. Vendors, including the young woman in an apron, prepare their produce for sale and display it. The market enables the exchange of money for goods, which suggests several subthemes of Money. 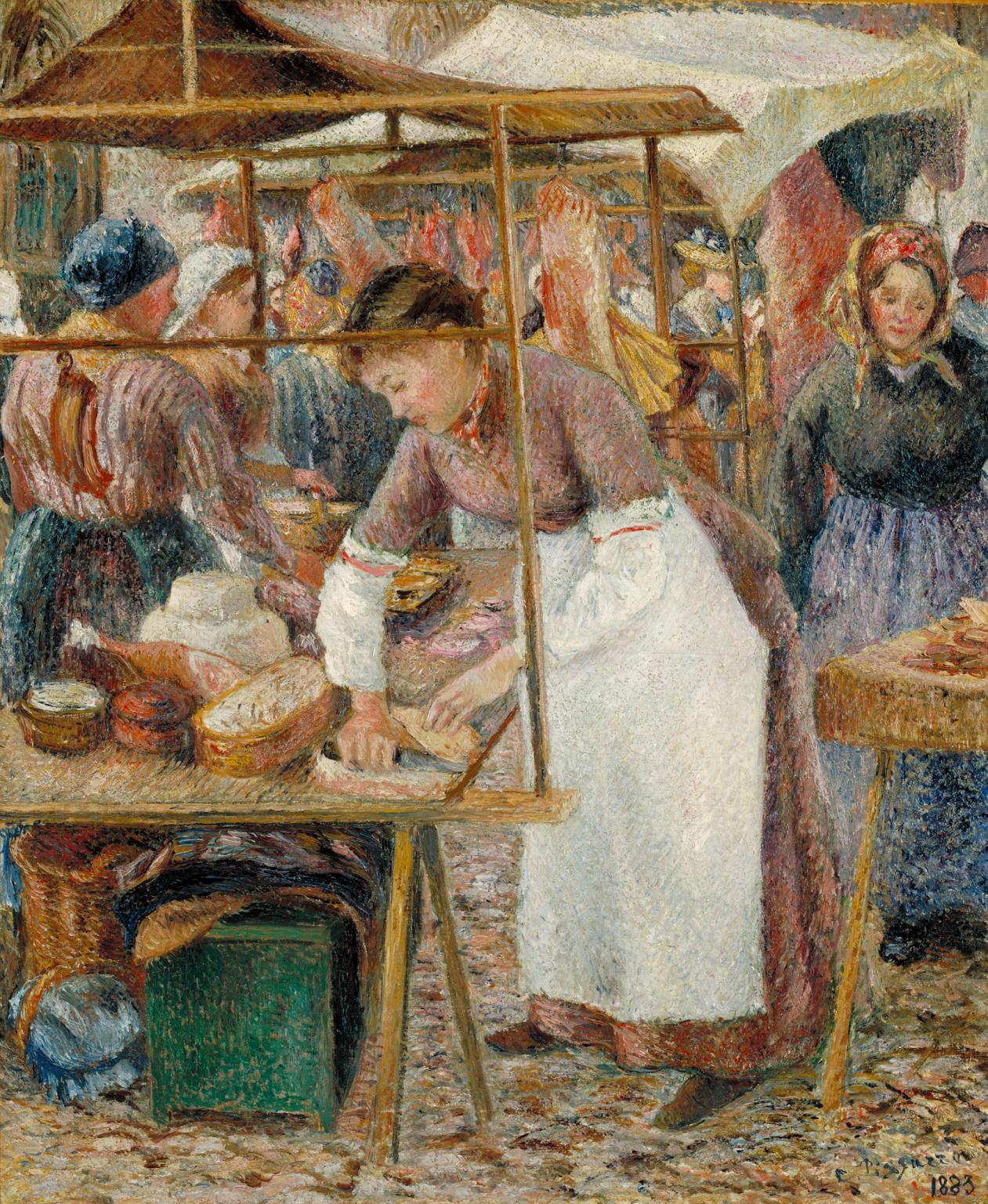 Barter: Where cash is in short supply, or people want to offer something in lieu of cash, they circumvent accustomed forms of payment by swapping goods and services with each other: my pork sausage for your white apron? A barter economy often characterizes primitive societies such as in dwellers in rain forests or deserts, but they also appeared in the Reconstruction South and the Dustbowl Midwest and wherever very poor people lived. In fact, throughout much of human history, individuals traded with each other and no one opened a cash register, so to speak. These trinkets for Manhattan! People exchanged what they were good at doing or producing with someone else who had a comparative advantage raising or making something else. If you lived in an agrarian, impoverished town and were mostly self-sufficient, money played only an occasional role. For example, Atticus Finch of To Kill a Mockingbird accepted chickens and vegetables for his legal services. A far cry from Wall Street moguls!

Currencies and Coins: When the young woman sold a side of ribs, she received francs and centimes. Every society has devised methods of payment. The variety has included wampum beads among Native Americans, cowry shells in Africa, and large stone wheels on the Pacific island of Yap. Early on, coins minted by rulers had intrinsic value as they contained minute amounts of gold or silver bullion that determined their worth. The Latin word “specie” (meaning kind, or type) is used to describe precious metals used as money. For commercial traders, bills of exchanged served to transfer amounts owed.

Countries choose the design of their currency and coins carefully, and usually adorn them with likenesses of historic places or people. Numismatists collect and trade them. Vending machines can accept both forms of money and ATMs can spew it out. All this said, physical money faces obsolescence because of the march of electronic payments and fintech – the digitization of finance.

Fiat Money and Inflation: The first known paper currency as we would understand it today was created in China during the Song Dynasty (AD 960–1279).

For hundreds of years, holders of currency could redeem it (most commonly) for gold or silver. That is to say, the circulating banknotes (to use a later term) were backed by a corresponding amount of precious metal. Hence, Fort Knox. In the latter part of the 20th century, however, governments abandoned this promise. Most currencies now serve simply because people accept them. This is known as “fiat money.” Countries printed their currency and have a treasury that oversee the rate of production. The value of a currency declines if the government prints more money than the revenue it collects. Money depreciates as inflation nibbles away its worth, even to the degree of the hyper-inflation suffered by Weimar Germany. Also, exchange rates (or black market terms) worsen when a government prints money profligately, which makes imports more costly and repayments of debts denominated in harder currencies more expensive.

From the Pissarro painting we can imagine shoppers at the market exchanging their own wares for the food they want or paying for it with bills and coins. The French currency at the time could have been exchanged for a precious metal, which kept inflation at bay, but the coins were not likely to be specie.

If you are interested in further thoughts on the concept of Money, consider other subthemes that don’t fit as directly to the poem, painting, rock song, and movie written about in this series. For an overview, this article explains Themes from Art or click on the navigation bar, About.