Night, from "It Happened One Night," a movie starring Clark Gable and Claudette Colbert

It Happened One Night, starring Clark Gable and Claudette Colbert, includes many scenes at night during the unlikely escape to New York City by a journalist and a wealthy heiress. Colbert dives off her father’s yacht at night, the bus pulls over at night, and the two stars memorably spend several nights together. Those scenes suggest several subthemes of Night. 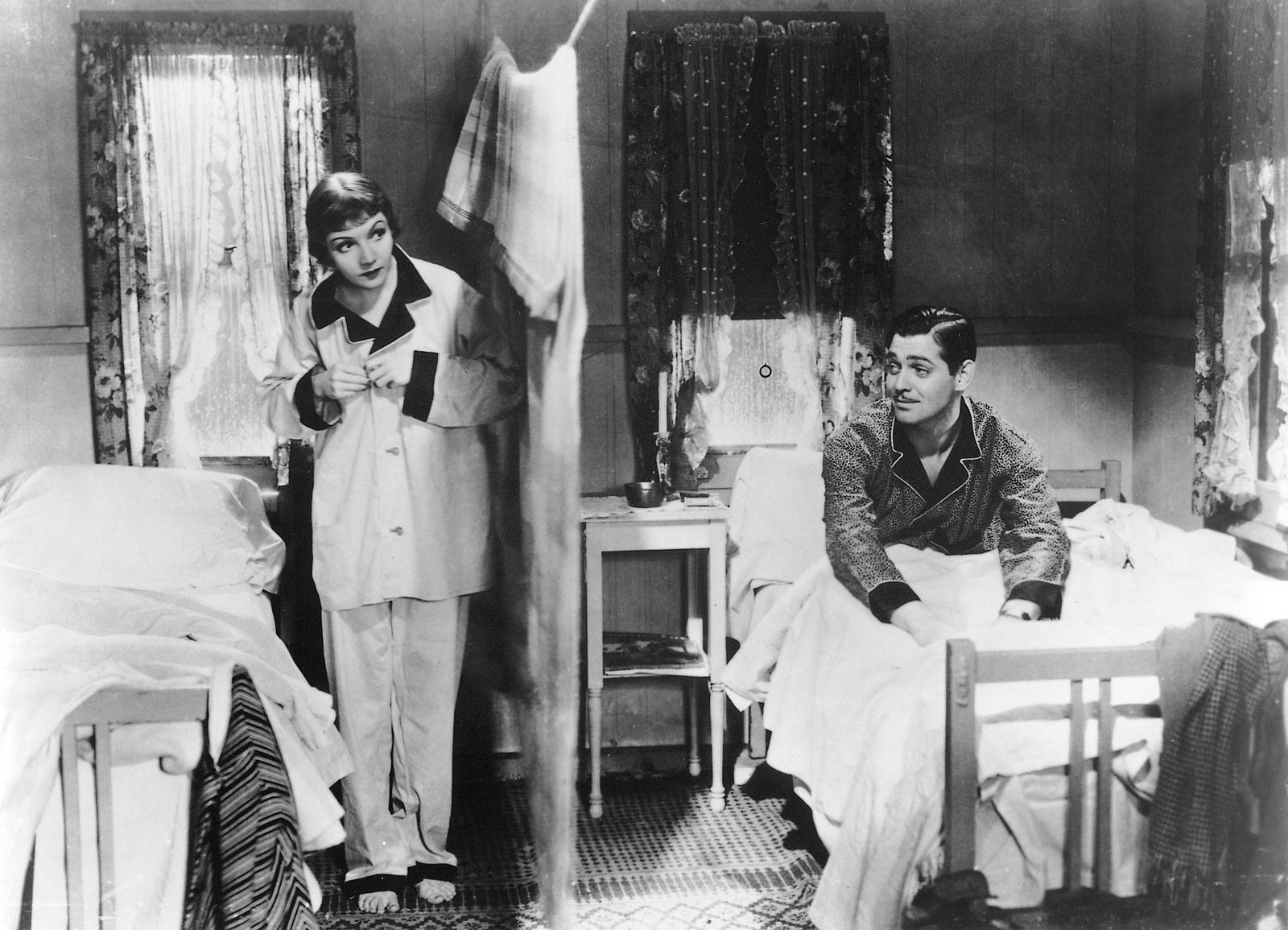 Sleep, Insomnia: Colbert sleeps with one eye open while Gable snores on the other side of the draped sheet. Most people sleep more soundly during the dark of night. Light blocks our brain’s production of melatonin, a natural chemical that makes us sleepy. Our circadian rhythms as humans demand a period of slumber and recovery, so we comply when the lights go down. Healthy adults settle into a daily rhythm of slipping into bed around the same hour at night and waking at about the same hour. We all grow accustomed to cycles of one-third sleep and two-thirds awake. However, as we age we find it harder to sleep through the night. Nearly 70 million Americans are estimated to have a sleep disorder. Insomnia is the most common, with 30% of adults experiencing short-term insomnia; about 10% of people have long-lasting insomnia. External noises, medicine, caffeine, aches and pains, stress and fears eradicate the pleasure of pillow and mattress. Pain hurts more when you are in bed tossing and turning, with less to distract you than during the day. Alcohol, too, can disturb peaceful slumber. The quality of one’s sleep becomes common fodder for conversation.

Illumination: Overhead lights weren’t a problem for the two escapees. But at night in the old days, the only illumination came from a fire, candle, or the moon. A fire could be a campfire, fireplace, burning wick, or perhaps a torch, typically a piece of wood with one end wrapped in a rag that has been dipped in flammable fluid and lit. Torches were often put into sconces to serve as fixed lightning in crypts and castles. Later, people developed candles with wicks called “light tapers” (a slender lighted wax candle). Over time, torches, tapers, and candles were replaced with whale oil, oil, gas, and electrical lamps. Light switches, pull strings, timers, and motion detectors were invented to turn on a huge variety of light bulbs (fluorescent, LED, etc.). Outside, night vision goggles use thermal imaging technology to capture infrared light. With them, you can see an image of what’s ahead in the dark based on the amount of heat emitted by objects. Our major cities are ablaze at night. In fact, the amount of illumination detected at night by satellites correlates to GDP because brightness correlates with both population and electricity use.

Party Time and Entertainment: Erotic energy suffuses this movie, but any hint of overt sexuality was muted completely by the prurient standards that restricted 1930’s movies. Meanwhile, after work and at night, many people turn to love-making and other pleasurable activities. Large meals, parties, sleep overs, pajama parties, cultural events, sports and games all happen most commonly at night. Who knows what’s ahead for strangers in the night? Prime time for TV is about 8-10 PM when the highest rated shows come on. Casinos stay open 24 hours a day. Metabolically, young adults often want to stay up much later at night than their parents; as the expression goes, they want to “go out at night.”

The funniest scenes of this classic movie take place at night, when the wary but trapped Colbert worries about the improprieties (or worse) that might be in store for her in various motels. For other reasons, the nights were difficult for her and Gable whether illumination was present or not.

If you are interested in further thoughts on the concept of Night, consider other subthemes that don’t fit as directly to the poem, painting, rock song, and movie written about in this series. For an overview, this article explains Themes from Art or click on the navigation bar, About.