Night, from "The Starry Night," a painting by Vincent Van Gogh

The Starry Night, painted by Vincent Van Gogh near the end of his life, mystically and magically depicts a small hamlet at night with a teeming mélange of swirling stars overhead. From this famous painting we can amplify several subthemes of Night. 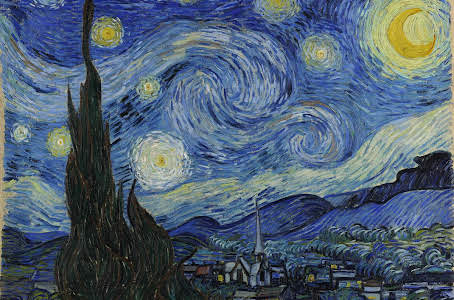 Quieted Tempo: The peacefulness of the village, with its lumpy church and mushrooms of homes, calms the lower portion of the canvas. Van Gogh painted no carts rumbling on paths, no railway trains, and no disturbances in the tranquility of the background hills. In our time, public parks close at dusk; shops pulls down their shades; electricity usage falls off; birds sleep in trees; restaurants, cinemas and bars end their evening; and a widespread quiet descends on the land. Body temperature and the outside temperature falls at night. The painting conveys diurnality, a term for plant or animal behavior characterized by activity during the day and sleep at night. Night slows the metabolism of the world.

Night and Shift Workers: Even though the overall tempo slows at night, many employees are on the job. Perhaps not in Van Gogh’s village, but today police, military, hospital workers, firefighters, truck drivers, hotel staff, security, and factory workers are among those working the “graveyard” shift that keeps the country moving 24 hours a day. Also called the “third shift, " those workers make up 3.2 percent of the work force. They toil at night because it’s a dream job, they get a little extra pay, or their family situation requires it. They may find a vampire schedule’s more convenient, or they lack the seniority to pull a daytime shift, or it may be the only job available. In addition to the people who work night shifts, about 2.5 percent of the work force (2.4 million people) work rotating shifts, meaning that they alternate between day, evening, and night shifts.

Nocturnal Animals: We can’t spot any opossums, foxes or bats roaming in the painting, but many animals come out mostly at night. Wikipedia lists 86 creatures that live nocturnal lives, ranging from aardvarks to wombats. They tend to have better vision in the dark than other animals, so they hunt then and snooze during the day. In the deep ocean, complete darkness rules below the aphotic zone. From 1,000 meters below the surface, all the way to the sea floor, no sunlight penetrates. Yet life flourishes in the deep ocean’s perpetual night. Or if you were spelunking and your flashlights died you would experience absolute darkness. Not a photon to be had; fully dilated pupils would register nothing. But around you would live cave dwellers, called ‘troglophiles’. Examples of troglophiles include mollusks, worms, spiders, millipedes, centipedes, crustaceans, insects, fish, amphibians, and reptiles.

The Moon: The painter included a white moon, contrasted to the dark tree on the left. The Moon has forever been associated with night, because the moon dominates the sky, it changes constantly in size, and indeed during the night it appears differently. Selene was the personification of the moon as a goddess for both Romans and Greeks. The Moon beams down wonder, longing and love; but the obverse too, of ghostly galleons, moonstruck youths, fears and bad moons rising. Perhaps the most widely viewed event in all history was on July 20, 1969 when Neil Armstrong and Buzz Aldrin landed the Apollo Lunar Module Eagle on the moon. Many religions or peoples observe a lunar calendar. When the Moon passes between Sun and Earth, the lunar shadow is seen as a solar eclipse on Earth.

A bucolic night scene, but blazing and flowing in the firmament, this impressionistic painting by Van Gogh captures the calm below yet the energy above. The viewer can sense the unconquerable soul of the troubled painter in this moody but joyous painting. Despite the curtain of evening, this painting throbs with light. Most of it blazes with fanciful stars, auroras and other glowing sky objects. Van Gogh captured in this famous painting the contrast of tranquility on earth and wonder in the night-time heavens.

If you are interested in further thoughts on the concept of Night, consider other subthemes that don’t fit as directly to the poem, painting, rock song, and movie written about in this series. For an overview, this article explains Themes from Art or click on the navigation bar, About.