Thinking, from "Interior at Aracharon," a painting by Edouard Manet

Subthemes: Intelligence, Books and Beyond, Challenges from Religion

“Interior at Aracharon,” painted by Edouard Manet, presents a young man as he holds an open book in his lap, lost in thought. He may be daydreaming, or he may be struggling to grasp and remember what the book says, or he may be thinking about any subject. Other books or papers lie strewn on the table and the chair behind him. He is chewing away, grappling with something in his mind. Across the table, an older woman too may be thinking or may be idly gazing through the open doors to the ocean beyond. Thinking, and subthemes about it, fill this painting. 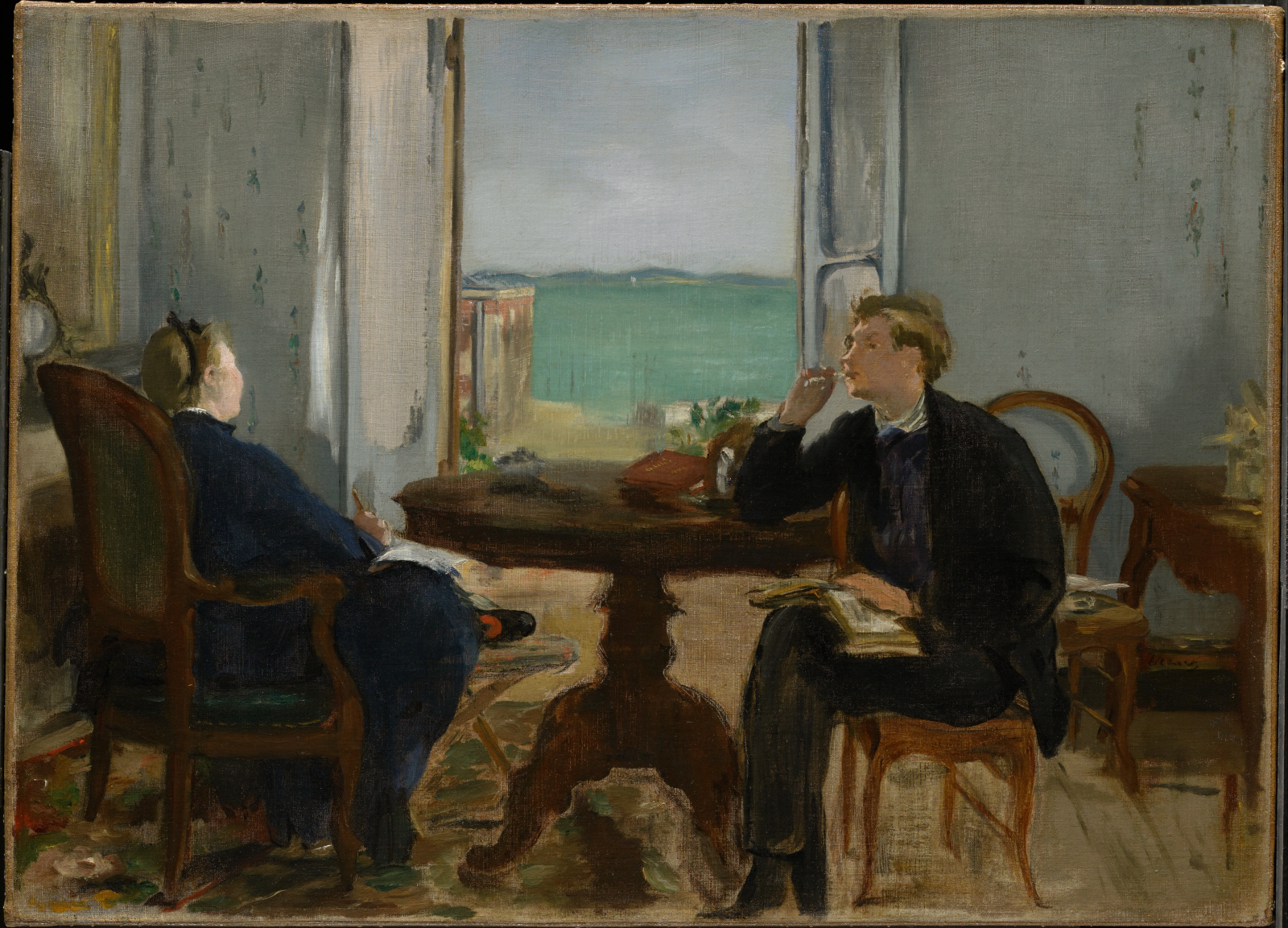 Intelligence: We do not know how to measure unequivocally and without controversy the processing speed and power of an individual mind. Paper and pencil tests abound to calculate intelligence quotients as do various proxies, such as SAT scores or nonverbal intelligence tests for children, but all too often high marks on such instruments do not lead to success in life. We can readily tell when someone before us reaches conclusions quickly, understands problems with alacrity, and speaks with pellucid crispness, but to attach a number that adequately expresses cognitive acuity to those wide-ranging abilities, such as “an IQ of 125,” eludes us. An illiterate, uneducated person can possess powerful mental proficiencies. Unbookish street-smarts are admirable, recognized assets. Some people believe there is a generalized intelligence G but that people manifest mental talent with a variety of minds. Howard Gardener has notably proposed a theory of multiple forms of intelligence and Edward De Bono’s well-known thinking hats present a different take on a similar idea: thought proceeds in assorted styles and paths. Nature and nurture sow plentiful cerebral seeds and many plants bloom. We also know that genius blossoms infrequently but the garden of genius sprawls.

Books and Beyond: For millennia, young men (rarely young women) learned from a tutor. Over time, group teaching spread and children were instructed by a teacher (a gymnasium in Greek) and books. The opportunity shown of the youth in the Manet painting, reading a book and studying, came even later as literacy spread and the cost of books declined. If you don’t learn from books, you are unlikely to absorb enough learning from friends and the media. Books used to be the primary method of learning, but they now have much competition from online resources: Kahn Academy, Massive Open Online Courses (MOOCs) such as Coursera, YouTube videos, podcasts and online question-and-Q&A for a such as Quora or StackOverflow have proliferated. Our ways to improve our and-thinking have expanded significantly.

Challenges from Religion: The gentleman Manet painted appears dressed as if it were after church. Fact-based thinking can be at odds with faith-based believing. Clerics favor received convictions over independent conclusions. The faithful of a religion maintain that what their sacred texts proclaim tower as verities that rationalists, atheists, and scientists cannot overthrow. The Bible, the Torah, the Koran, and Confucian sayings, among other theological belief systems, hold primacy for true believers. The domains of scientific rationality and holy words do not intersect. Thinking proceeds apace in both spheres, but the underlying assumptions diverge.

This Manet painting radiates thinking. Quiet, books, notepaper, and engaged minds appear before us. Enlightened and stimulated by the open books, the young man contemplates and organizes his thoughts. He is thinking embodied.

If you are interested in further thoughts on the concept of Thinking, consider other subthemes that don’t fit as directly to the poem, painting, rock song, and movie written about in this series. For an overview, this article explains Themes from Art or click on the navigation bar, About.