Fire, from "The Flood. Banks of the Seine, Bougival," a painting by Alfred Sisley

Alfred Sisley’s painting, “The Flood. Banks of the Seine, Bougival” incongruously (and probably unintentionally) pictures too much water in the front against a background of billowing smoke from an industrial chimney. Fire and water, classic opposites, contrasted on one canvas. Other subthemes of uses of Fire can be elicited. 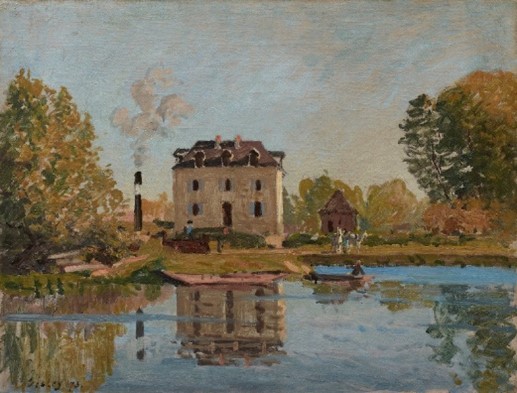 Industry: Controlled fire drives much of the industrial manufacturing world. Starting long ago in forges, smithies hammered hot, malleable iron ore into swords, horseshoes, cooking ware, and other metallic objects. They obtained their crude iron from bloomeries, and pounded out the slag, produced worked iron (“wrought” means worked). Now we have enormous smelters that turn out vast quantities of steel, copper, and aluminum. Industry also unleashes the fire of soldering to meld metal to metal, as in shipbuilding and with skyscraper beams. For over a century trains and ships were stoked by coal’s fiery heat; steam engines for all sorts of purposes were powered by boiling water so turbine rotors spun after fire drove water to a frenzy. Cogeneration burns garbage to drive steam turbines. The food preparation and restaurant industries rely on the heat of countless ovens and stoves. Considering all these industrial uses of fire, it is likely that hundreds of millions of workers around the world harness fire.

Pottery and Bricks: We don’t know what Sisley’s background factory churned out; perhaps it created china, porcelain, or ceramics. Ceramics are made of fired clay, which makes it more durable: earthenware, stoneware and porcelain. The most expensive is porcelain as it is made of kaolin and petunse. Once the ceramic has been shaped, it is fired (hardened) in a specialized oven known as a kiln. Often, ceramics are covered in decorative, waterproof, paint-like substances known as glazes. Heat from fire (or the sun’s baking) also makes adobe bricks and allows the elaborate craft of glass making and glass blowing. Glass is heated sand that liquifies at 3,090 °F.

Insurance: When Sisley painted this scene in the 1870’s, the building with the smokestack may or may not have been insured against fire damage. The first fire insurance policy can be traced back two hundred years, to the Great Fire of London in 1666. After it destroyed more than 30,000 homes, one Nicholas Barbon started a building insurance business and later introduced the city’s first fire insurance company. As early as the first decade of the 20th century, in the United States, upwards of 70 percent of burned property was insured, including skyscrapers.

Mortgage lenders require property owners to take out fire insurance, and for good reason. According to a report covering 2015 through 2019, “US fire departments responded to an estimated average of 346,800 home structure fires per year. These fires caused an annual average of 2,620 civilian deaths; 11,070 civilian fire injuries; and $7.3 billion in direct property damage.” In 2020, a fire department responded to a fire on average every 23 seconds in the United States, according to the National Fire Protection Association. A home fire was reported every 89 seconds, a home fire death occurred every three hours and 24 minutes, and a home fire injury occurred every 46 minutes. Cooking was by far the leading cause of home fires including fireplaces, followed by malfunctioning heating equipment and then electrical connections.

Nature’s Matches: In addition to fires deliberately set by arsonists, carelessness leads to blazes. Embers from a smokestack, unstubbed cigarettes, poorly doused campfires, sloppy fireworks, and faulty equipment that sparks can all start fires. Humans, however, must bow to nature if they compete on setting fires. Lightning bolts are they main culprits. Every second on Earth, 100 lightning bolts strike the planet. That’s about 8 million strikes per day on average. They can start destructive wildfires as well as torch trees and buildings. Volcanic eruptions also set buildings and wood ablaze with lava, pyroclastic flows, and molten rocks hurled distances. Perhaps nature’s most devastating fires flashed out from the meteorite that slammed into the Yucatan some 66 million years ago and triggered what is believed to have been a world-wide conflagration.

The impressionist painters cared far more about light and outdoors than industrial objects. But in this painting, Sisley included a symbol of industry, a furnace with its belching smokestack. The fires driving heat and smoke up that stack were creating products for the market.

If you are interested in further thoughts on the concept of Fire, consider other subthemes that don’t fit as directly to the poem, painting, rock song, and movie written about in this series. For an overview, this article explains Themes from Art or click on the navigation bar, About.