Books, from "Still Life with Books," a painting by Vincent Van Gogh

Still Life with Books (Nature morte aux livres) by Vincent Van Gogh features 17 books, plus a pamphlet or two, all stacked or strewn on a table. None of the books show titles or suggest their subject, but the one lying open has what appear to be colored markings. What subthemes related to Books does this impressionist painting suggest? 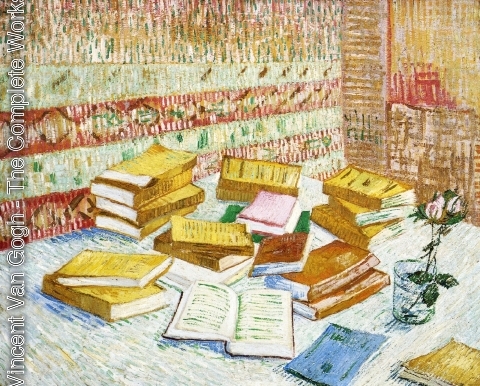 Libraries: When Van Gogh painted this tableau in southern France, late 1887, public libraries were hard to find. They did exist, however, because in 1794, the government had transformed the newly created municipal libraries into public libraries, so one might have been in Arles. In the United States today, more than 16,000 public libraries dot the land, out of a total of 123,000 libraries where autodidacts can feed their urge to learn. The other three basic types of libraries are in lower schools, academic settings, or “special libraries.” The most notable of the special category would be the Library of Congress, which houses a vast collection of books, in part because publishers must provide to that library a copy of every book copyrighted in the United States (the Library decides whether to catalog the books submitted). When the British torched Washington, D.C. in 1812, the Library’s collection of books went up in flames. Thomas Jefferson sold the rebuilt library 6,000 of his personal volumes to restock it.

Physical Production: Van Gogh’s books appear used and cheaply produced. The eccentric genius wasn’t focused on the technology or production qualities of his still life subjects. Since then, book publishers have revolutionized their methodologies. Wonderopolis summarizes the current method for production of books: “Printers print the text of a book on large sheets of paper, sometimes as large as a newspaper page. … The large sheets are then cut into smaller pages that are still about twice the size of a finished book. The smaller pages are then divided into small groups, folded in half, and sewn together. Lastly, the folded and sewn pages are cut down to their finished size and glued to the spine of the final book’s cover.” Made How has a clear explanation of the multiple steps required to produce a book as does My Reading World. The high-speed output of books has come a long way since the Puritan days or late 19th century France.

Historical Development: In Van Gogh’s lifetime, books were plentiful and relatively inexpensive. They had been around for a long time. Wonderopolis summarizes “When ancient civilizations first started developing writing systems, they would write on just about anything, from stone to tree bark.” The first known forms of written documentation were the clay tablets of Mesopotamia and the papyrus rolls of Egypt. Examples of both date to as early as 3,000 B.C. Papyrus was made by pounding flat the woven stems of the papyrus plant and it was not long before the Nile people glued together papyrus sheets to form scrolls. Independent of these developments were Chinese books, made of wood or bamboo strips bound together with cords, created as early as 1300 B.C. , which were the first steps toward books as we know them. The birthplace of bookbinding is considered to be India in the 2nd century B.C., where Hindi scribes bound palm leaves that were etched with religious texts between two wooden boards using twine. The technique spread to the Romans by the 2nd century A.D.

For a thousand years or so thereafter, new books resulted from copying older books by hand, which was mostly the painstaking work of monks. They often embellished their manuscripts elaborately. It was not until the late 1100s A.D. that Western Europe experienced a revitalization of the illuminated manuscript tradition. Before paper arrived in Europe, virtually all illuminated texts were produced on vellum, a highly durable and costly cousin to common parchment.

Being poor, Van Gogh painted books that he might have borrowed, because there was probably not a local library from which he could have checked them out. The low-cost volumes on the table probably cost relatively little as the manufacture of books had improved vastly from papyrus, scrolls, and illuminated manuscripts.

If you are interested in further thoughts on the concept of Books, consider other subthemes that don’t fit as directly to the poem, painting, rock song, and movie written about in this series. For an overview, this article explains Themes from Art or click on the navigation bar, About.