In La Pont de l’Europe by Gustave Caillebotte (1876), a dog approaches two elegant strollers on a bridge in Paris. The dog wears a collar and the man in the top hat appears to be watching it, warily. The man leaning on the bridge couldn’t care less. Other subthemes of Dogs can be trotted out. 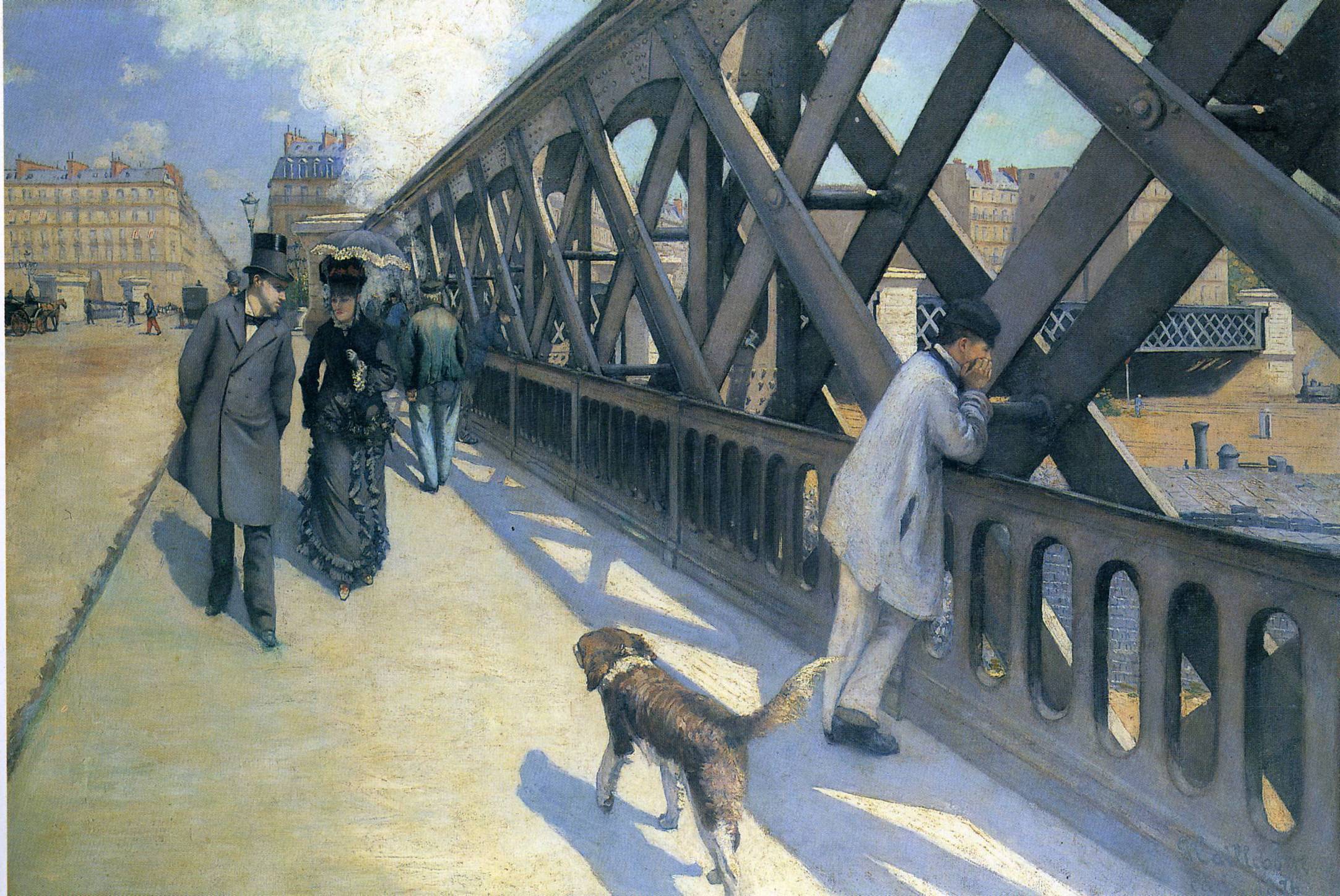 Strays and Ferals: From the lack of a human shadow nearby, the small dog crossing the bridge appears not to be with its owner. But it does sport a collar and appears healthy and well-fed. Many other dogs, sadly, struggle to survive on their own. Approximately three million dogs a year enter shelters in the United States, of which around 710,000 are returned to their owners and 400,000 are euthanized (“put to sleep”) according to the ASPCA. But shelter dogs are at least cared for and, hopefully, adopted. Shelters are typically operated and funded by local governments, and shelter animals are kept in a facility and housed with other animals. Rescue dogs have usually been abused; rescue groups, which are generally operated by volunteers and funded by donations, save the dogs and try to place them with kinder owners.

Strays in the United States generally end up in shelters, but not so in many countries of the world. India has an estimated 30-35 million stray dogs, according to Sava Stray. At least stray dogs coexist with humans.

Dogs that are born in the wild and live without human contact are feral dogs (aka “free range dogs” or “wild dogs”). They likely have had little exposure to humans and what contact they had may have been frightening. They may look like domestic dogs, but mangier, and over time, their behavior has changed. Feral dogs tend to be frightened or extremely wary of humans. Currently, 35 species of wild dogs are recognized. They belong to the dog family, Canidae, which also includes all extinct dog species.

Diseases or Maladies: Caillebotte’s mutt on the move looks healthy. But dogs face many medical issues. in 2020 veterinarians in the United States whose private practice was defined as “Companion animal exclusive” (dogs, cats, birds, pets) numbered 50,309. Among the common dog ailments they treat, according to Pet Resort, are ear or skin Infections, dental disease, vomiting/diarrhea, stiffness, urinary problems, and obesity. More serious maladies include cancer, hip dysplasia, of if they eat something poisonous. Worse, and alarmingly, 1.2 million dogs are killed on the roads each year in the United States. Eventually, every dog comes to its end.

Evolution and Domestication: The dogs we know and love, Canis familiaris, are directs descendent of the gray wolf, Canis lupus; our pets descended from domesticated wolves. Not only did their behavior change over tens of thousands of years living with humans, but physically too; domestic dogs are different in form from wolves, mainly smaller and with shorter muzzles and smaller teeth. A DNA analysis published in 1997 suggests the transformation of wolves to dogs began about 130,000 years ago. This means that wolves began to adapt to human society long before humans settled down and began practicing agriculture. “Already, 11,000 years ago, there were at least 5 different groups of dogs across the world, so the origin of dogs must have been substantially earlier than that,” says Nature. This earlier timing casts doubt on the long-held belief that humans domesticated dogs to serve as guards, companions, or to assist them. Rather dogs may have exploited a niche they discovered in early human society and induced humans to take them in out of the cold. Canines, also called canids, include foxes, wolves, jackals, and other members of the dog family (Canidae). Finally, if you are interested in 15 breeds of dogs that have gone extinct, visit the site of Odie.

Breeds: Caillebotte painted a mongrel, a dog of intermixed pedigree. The profusion of breeds today reflects intense, purposeful interbreeding of dogs during the past 150 years – resulting in more than 400 recognized breeds according to the Morris Animal Foundation. To cite just one example, bloodhounds have been selectively mated to track scents. However, the AKC had registered only 197 dog breeds as of late 2021. Most dog breeds we recognize today were developed since the “Victorian Explosion.” During that period in 19th century Great Britain, dog breeders became passionate about sculpting the ideal of each breed. Many of the conformational traits we think of as classic for a certain type of dog have their origins in this era.

A medium-sized dog – healthy and cared for by someone – roams toward a stylish couple strollling on a bridge. He is not a scavenger on the streets, let alone feral. Of no distinct breed, this Parisian chien (or chienne) has come a long way from its lupine ancestors.

If you are interested in further thoughts on the concept of Dogs, consider other subthemes that don’t fit as directly to the poem, painting, rock song, and movie written about in this series. For an overview, this article explains Themes from Art or click on the navigation bar, About.